Of all the places we visited during our recent trip to Western Australia none was as fascinating and unexpected as the small town of New Norcia, 132 kilometres north of Perth in the Central Wheatbelt. 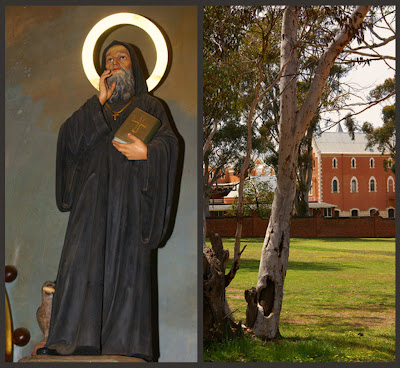 Founded in 1846 by two Spanish Benedictine monks (that's St Benedict holding his book of rules above), New Norcia was created with the intention of producing a Catholic and self-sufficient village based on agriculture for the indigenous peoples of the Victoria Plains.

Later the monks concentrated their efforts on the education of Aboriginal children who were brought to New Norcia from all over the state. Like other missionaries of the nineteenth century, their aim was to 'civilise' and evangelise according to the European ideals of the time, but they did so with a sympathy for indigenous culture that was rare for the times. 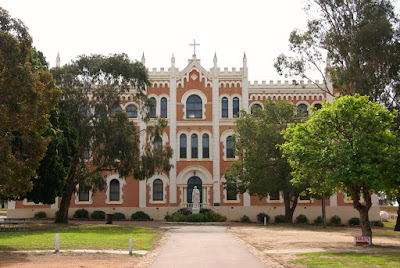 Early in the 1900's St Gertrude's Ladies College (above) and St Ildephonsus College for boys were built to educate the children of wealthy Catholic pastoralists. the two schools garnered a significant reputation, attracting children from as far away as Singapore.

Despite the closure of the last of the schools in 1991. New Norcia continues as an active working monastery, and is the only monastery town in Australia. Benedictines live a way of life established in Italy in the sixth century by St Benedict. Benedict developed a regular, disciplined and prayerful way of life for people seeking God in a community. In old age he wrote down his practical arrangements for the living of monastic life as a Rule or guidebook for his followers, which is still adhered to today. 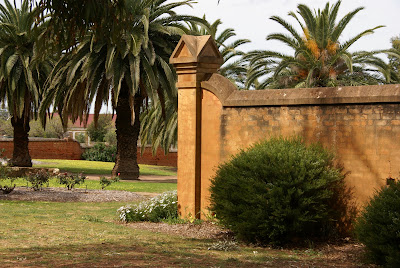 For us the attractions were the history, architecture and food, rather than the religion, although many Roman Catholics continue to visit the town to stay at the spartan Monastery Guesthouse. 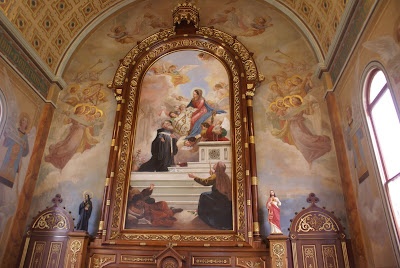 The founding monks paid particular attention to the interior decoration of the town’s buildings, importing Spanish woodcarvers and artists to create many fine works that are now part of New Norcia's rich artistic heritage. 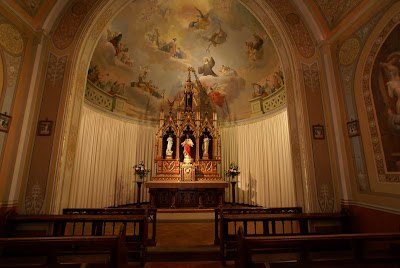 A tour of the town is a must. Lasting for two hours, we wandered through the monastery (well, the parts open to women, anyhow), the churches, the schools and the orphanages. It is hard to belive you are standing in Australia inside Abbey Church (above) with its beautiful paintings and Spanish altar.

New Norcia has its share of baddies - both real and fictional. In 1986 New Norcia found itself the victim of organised crime when two men bound and gagged the sole attendant in the town's Art Gallery and made off with 26 paintings, cutting them from their gilt frames with a Stanley knife before rolling them up and stuffing them into bags. The thieves were quickly captured by the Western Australian Constabulary, but it has taken over twenty years for the paintings to be restored, a huge task funded largely by the skilled craftsmen who completed the work. The paintings with their stark label 'Stolen' are once more on display in the town's award winning Art Gallery. 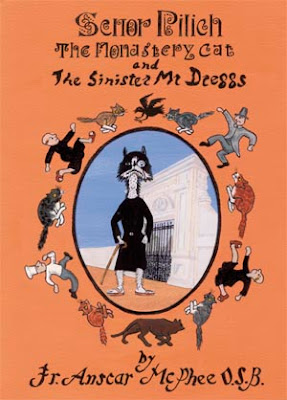 You can read about the town's fictional brush with foul play in a delightful book written by one of the monastery's previous residents, Fr Anscar McPhee OSB entitled Señor Pilich the Monastery Cat & the sinister Mr Dreggs:

My name is Pilich - Señor Pilich to be exact, and I like being exact even if I am not always precise. I am a cat. Not an ordinary cat. I am a monastery cat, with the distinction of having total responsibility for policing the monastery underworld - that is, under chairs, tables, church pews and abbot's cupboards. The monastery, which is my home, is situated next to a river, and the monastery's name is a very celebrated one - something to do with that holy man Benedict, born some place far away many years ago. Holy Benedict is the one who wrote the Rule the monks have always followed, following it even to that landmass registered as Australia in my book about places where cats live.

In this surprisingly well written and lively book you'll learn all about the extraordinary feline, Señor Pilich and how he saved the monastery from the sinister Mr Dreggs...

Mr Dreggs, a thief, was at large in the monastery. He was a confidence man. He was overly interested in valuable and historic things. He looked suspicious, acted suspiciously and, above all evils, he did not like cats. Dreggs was a positive threat to the place. He had to go.

This amusing little story of how Sr Pilich and his friends manage to foil Dreggs' sinister plans provided us with a unique glimpse into the otherwise private and sequestered life of the monks who live at New Norcia. We read it during our stay. Aside from some quick rephrasing of some questionable religious remarks, we found it an engaging and interesting story that made our visit to the town come alive - much as living books are supposed to do. It will appeal to all ages, although some Christians may feel a need to edit as we did.

I for one learned a lot - from both town and book. 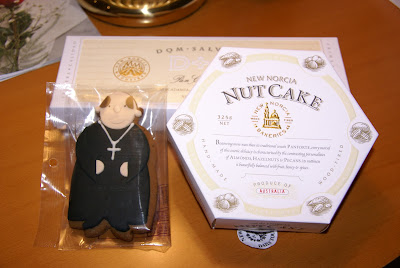 Thoroughly recommend the produce too - that nutcake is to die for!!
Posted by Jeanne at 14.10.09