We Live In Australia 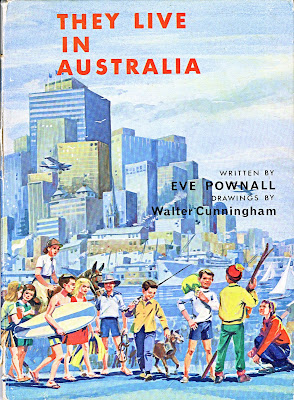 What is it like to live in Australia? Is it a country of urban sprawl, of great coffee shops and restaurants, sophisticated shopping, marvellous galleries and world class culture, or one of huge open wheat farms, or one of miles and miles of uninhabited beaches and perfect surf breaks, or one of green rolling hills dotted with sheep, or one of snowy mountains and alpine flowers, or one of vast stony desserts and Aboriginal art? What is your Australia?

My family's Australia is the Australia of broad acre farming, of wide rolling wheat and barley paddocks, of sheep and cattle and goats, of droughts...and of flooding rain. It is an Australia where kangaroos are kept as pets and we are woken by kookaburras in the mornings.

Tim and Sally live in our Australia. They live at "Cardoola", where sheep lie in mobs under the trees. Their Australia is one of sheep dips, fencing, feeding poddy lambs, crutching, ear marking, shearing and lambing.

When the first lambs arrived the Easter moon was full in the sky and the air was fresh and cool. The waterhole had a glassy look in the moonlight, and a mopoke was a dark lump on a tree before it flapped off on its evening haunt.

As lambing advanced Mr Horne and his men worked late and early, coming back to the homestead after dark, going out before first light to see if all was well. Snug in bed, Tim sometimes heard them leave to inspect the lambs born in the night...

This is Tim and Sally's shearing shed. This is their Australia, as it is ours. 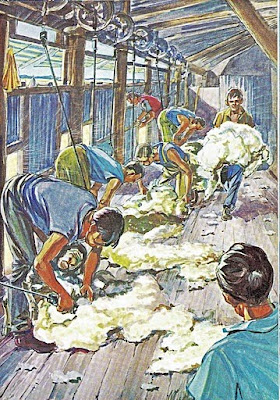 My friend, Rebecca's Australia is further north than mine. Her family's Australia is one of lazy hot summer days, of tidy grape blocks, fragrant orange orchards, and fishing in their river.

Alan lives in Rebecca's Australia. His father grows sultanas in his vineyard. Together Alan his dad fish for redfin, perch, yellowbelly and Murray Cod from the sandbanks along the river, or around the trunks of the giant red gums. In winter Alan helps his dad prune the vines. Later in spring he winds the young vine trailers into place on the wires...and worries about frost.

On clear still nights when glittering galaxies gemmed the riverland sky, vine growers stood ready for the summons that would send them out to fight the crop's Number One enemy, Frost. Each member of the Frost Club was rostered for duty.

This is Alan's grape block in February. The pickers have moved in to gather the harvest of green grapes hanging pale and translucent under the deeper green of the vine leaves. This is Alan's Australia, as it is Rebecca's. 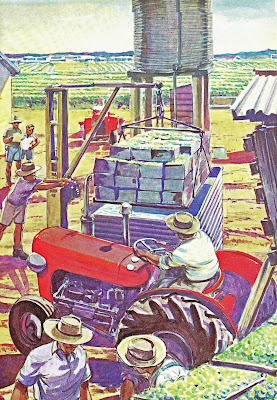 Sarah's family live on the coast. Hers is the Australia of beautiful white sandy beaches, of surfing and swimming and fishing and days lazing on the sand. Hers is a beautiful Australia of shimmering lakes and pristine forests and amazing bird life.

Karl lives in Sarah's Australia. Karl's brother Josef belongs to the Surf Life-Saving Club where he takes part in rescues with belt and reel. Karl is learning to surf and to swim. Karl also loves the forest. He loves to hike through the bush, where bellbirds call and the blue satin bower bird builds its stage. Almost every day Karl goes to the creek with his friends.

In summer they splashed and played in the water, or lay on the bank to watch a water-beetle climb carefully up a bulrush, or see a dragon-fly dart suddenly on a tiny gnat. In winter there were wonderful hiding places along the banks, and in all seasons there were tiddlers for the catching in the tiny stream.

This is Karl's Australia, as it is Sarah's. Can't you just imagine Sarah's son joining Karl in his adventures? I can.

Which is the real Australia? Is it Ruby's life in Rockhampton, or Renelle's in the Hunter Valley, or Ganeida's on her island, or Joyfulmum's in Sydney?

Is mine the real Australia?

They all are of course. We are all Australians, and we all live in Australia. Our own Australia. What a huge and wonderfully diverse land it is, this island continent of ours.

The Live in Australia is a book that describes the vast stony desserts, the tropics of the north, the broad sandy beaches, the lush forests, the snowy mountains. It describes drought and flood and fire and snow and frost and monsoonal rains.

More excitingly, it does all this in a book that children like to read. Written by Eve Pownall, the author of the 1952 Children's Book of the Year, The Australia Story, a writer who excelled in writing history for Aussie kids, it is also illustrated by the prodigious Walter Cunningham, without whom early children's literature in Australia would have been far less noteworthy than it is. 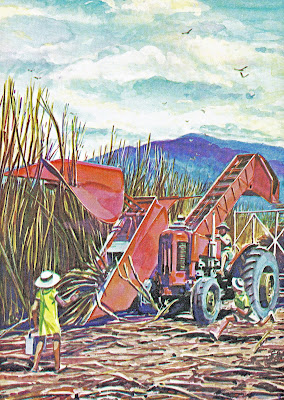 We are using They Live in Australia this year in AO4 for Australian Geography. We read the story, Jemimah narrates, we discuss what has changed in the region since the book was written in 1965, mark the location of the story on our Australia map, google a few pics of the region in 2011 and that's it. Except that with a book like this we rarely stop there. One week we went on to learn more about the moonscape around Tasmania's Queenstown; another we studying improved methods for protecting grape crops from frost damage; another week we looked more into the Snowy Mountain Scheme, and another we travelled down the rabbit trail of immigration and what has gone into making up our wonderfully vibrant migrant population.

I can't recommend this book enough. It's a ripper.

What's your Australia like? Have I spoken about it here? What makes it unique? Tell us about your home.

If you live overseas, do tell us what you imagine Australia to be like...what is our great wide land like to you?
Posted by Jeanne at 1.5.11