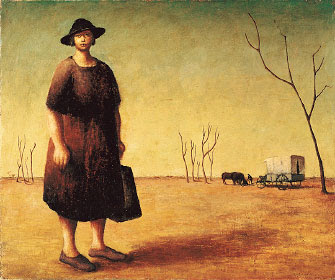 The two-roomed house is built of round timber, slabs, and stringy-bark, and floored with split slabs. A big bark kitchen standing at one end is larger than the house itself, veranda included.

Bush all round--bush with no horizon, for the country is flat. No ranges in the distance. The bush consists of stunted, rotten native apple-trees. No undergrowth. Nothing to relieve the eye save the darker green of a few she-oaks which are sighing above the narrow, almost waterless creek. Nineteen miles to the nearest sign of civilization--a shanty on the main road.

The drover, an ex-squatter, is away with sheep. His wife and children are left here alone.

Four ragged, dried-up-looking children are playing about the house. Suddenly one of them yells: "Snake! Mother, here's a snake!"

I'm glad Henry Lawson wrote The Drover's Wife in the third person, because women like her don't talk much. They're like the mother in Lassie - quiet, almost taciturn, speaking only when necessary and not indulging in unnecessary sentimental small talk just for the sake of it. Not that she's not feminine enough in her way - she even takes pleasure in the fashion plates of the Young Ladies Journal when she has the opportunity, but the drover's wife is a survivor.

She doesn't talk much because she doesn't think much. If she did she couldn't survive out there all alone in that shanty in the bush. And she has to survive because of the children. She loves those children more than life itself, and she has no option but to kill that snake before it kills one of them...

Henry Lawson's The Drover's Wife goes a long way toward explaining why he remains one of Australia's best known and most loved sons 90 years after his death. His prose is precise and understated, and yet at the end of the story you really feel like you know and understand this brave young Australian wife and mother. She is alive. You want to gather her into your arms and just hold her.

Which is just what Tommy does:

"Mother, I won't never go drovin'; blarst me if I do!" And she hugs him to her worn-out breast and kisses him; and they sit thus together while the sickly daylight breaks over the bush.

We read this beautiful short story in AO4. It works as well at 9 years of age as it does at...um...my age.

You'll find it online here. It is included in Short Stories in Prose and Verse (1894) at Gutenberg here.

I'll never complain about my life again. Never.
Posted by Jeanne at 25.6.11