Our own Country Diary 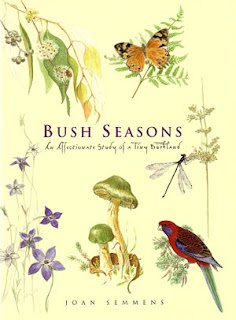 There are times when I’ve come up here and have been annoyed about something or in a bad mood, and I’ve never come out of the reserve feeling that way, it’s just what nature does to you I guess. It’s lovely after rains, you get this lovely earthy smell and the eucalypt leaves, birdsongs of course, they’re always the purest of sounds. And you just relax.

We hear a lot in homeschooling circles about Edith Holden's The Country Diary of an Edwardian Lady, and with good reason. Born in England in 1871, Holden's diary takes us through the English seasons of 1906. Her handwritten observations are complimented by poetry - some poems her own, and are illustrated with her exquisite watercolor paintings of the countryside near her home. Edith's work inspires us. She inspires us to observe nature more closely; to make a better collection of nature poetry; to get better at painting. I read her diary regularly.

There's another book that inspires me in the same way. It's called Bush Seasons: an affectionate study of a tiny bushland by Joan Semmens. I'm surprised that it isn't better known, especially in Australia. The quotes in this post are from an interview with its author, Joan Semmens, talking with the ABC's Kathryn McCallum on Radio National on Saturday 30/11/2002.

Joan, a retired librarian, began visiting the The Mckenzie Flora and Fauna Reserve near the South Eastern Victorian town of Alexandra during daily walks with her beloved dog. She kept notes on the changing bush, and sketched and painted the plants and animals. Fifteen years later, that diary had become a beautifully produced book, with 300 pages of detailed drawings and enchanting water colours - every bit as beautiful as Edith Warton's. Even the cover of the book is reminiscent of the Edwardian Lady's.

Joan describes the bush season by season, and talks about each plant as if she was introducing an old friend. To her that's what they were - familiar friends...and it shows. This book inspires me in a way that Edith Holden's book never can because it is about our Australian bush. The countryside around Edith Holden's home was rich, verdant, teeming with life. The flora and fauna around my home is more shy. You need to be more patient; more observant to see anything at all.

People come here and they think, Well what is there here? It’s not like going into a rainforest, and it sort of grows on you, this dry bushland, and people can’t see it for a long time sometimes. It’s just typical of the Australian bush to me, there couldn’t be anything more Australian than this.

Like Charlotte Mason, Joan really looks at nature, and she encourages me to do the same.

With drawing and painting, you really get to know the plant or the toadstool, whatever you’re painting, you have to count the petals, you have to look at how the gills are organised, you have to really work out what sort of colour things are. It’s a much more intense involvement than photography, and yes, I just love that, I love the fact that your paintbrush was copying this fantastic little shape and you were almost part of the shape as you painted.

If you're not an Australian then you probably won't pore over each and every plant as I do, but this book is as inspirational as The Country Diary of an Edwardian Lady - no matter where you live in the world. It's not in print, I don't think, but is readily available, both in Australia and overseas. It's a wonderful addition to any nature library.

We can have that sense of belonging, whether we’re old or new Australians, and I think it’s how you relate to places and how you form attachments to them that are very strong and very real.