I am, in general, not a fan of anthropomorphised talking animal tales. There are exceptions, of course - The Magic Pudding; The Muddle Headed Wombat and Blinky Bill to name three in pretty quick succession, but generally I prefer books where the creature, although assuming a personality and becoming the book's protagonist, retains its animal behaviour, dignity and nobility.

In Australia, one of the best of this type of literary animal story is also one of the oldest of its type - Dorothy Cottrell's Wilderness Orphan, which was written back in 1936. We read it as a free read in AO3. 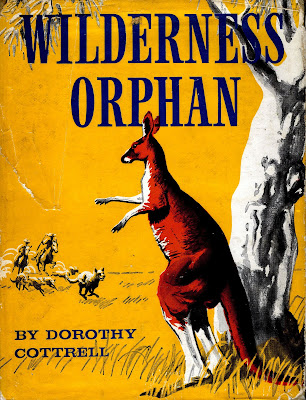 Even a child who does not particularly enjoy natural history type books will learn much from a well written animal story like Wilderness Orphan - the way the infant kangaroo won't drink unless it is upside down, for instance, or that a kangaroo cannot kick well unless it can embrace the thing it is kicking. But Wilderness Orphan is more than just an educational book about kangaroos - it's a story about the cruelty of animals by man, of the bewilderment that comes from that betrayal, and of a wild animal's need for independence and freedom in the wild. It is also an excellent story. 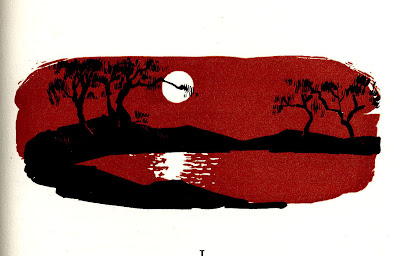 Chut is first lifted from his mother's pouch by a lovely waterway in Queensland. Not long afterwards the hunters arrive and Chut is left alone.

His mother lay still in the early light. For Chut there was neither shelter nor food, and his long legs were still wobbly with babyhood, his little black hands uncertain of their movements.

As he sat, unhappy and shelterless, in the flood of light, a great shadow swept across the dust as a big wedge-tailed eagle passed overhead. 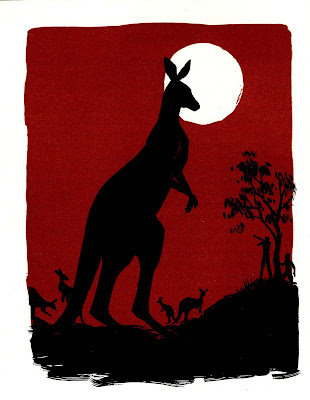 Chut is rescued by one of the hunters who takes him home as a pet for his young wife. Life is happy there.

There was soft green grass to roll in and trailing pepper trees beneath which to play. In short his world was very satisfactory - save for one thing.

That thing was William Mutton.

William the bumptious lamb harbours a deep resentment at the loss of his baby's bottle to Chut, and is determined to have revenge.

Through William, Chut learns to fight.

When the drought forces the kindly hunter, Tom Henton, to sell Chut to a trainer to buy feed for his starving sheep, Chut's ability to 'box' results in him put into one of the second-rate travelling tent shows that travelled through the Australian outback towns in those days. 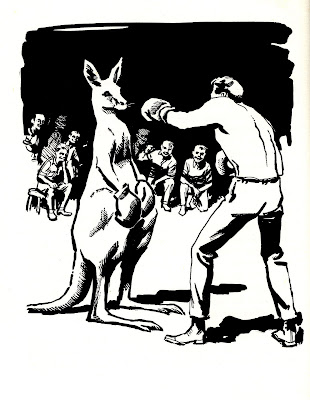 Chut is persecuted, tormented and tortured by Shorty McGee his new owner. He is left without water and food. His companion is killed. Finally, desperate for water, Chut takes revenge on his tormentor and escapes. Heading for the country where he was born, where he was happy, and where he was free, Chut is pursued by dogs and men.

Will he make it? Will he reach the tall bleached silver Queensland grass? The white spider lilies around the cool sweet water? The grey moth's wings in the moonlight?

Will Chut ever really be free?

Will he ever be happy?

Wilderness Orphan was made into a film named Orphan of the Wilderness in 1936 by Ken Hall.

You can see clips from the film on the Australian Screen website here. The first two clips are rated G and are delightful. The third is rated M and shows footage of a Chut thirsty and tormented in the boxing ring. I found it distressing, and the scene is likely to be the cause of a ban on the film in England for alleged cruelty to animals. Watch it yourself before showing it to kiddies.
Posted by Jeanne at 22.2.10