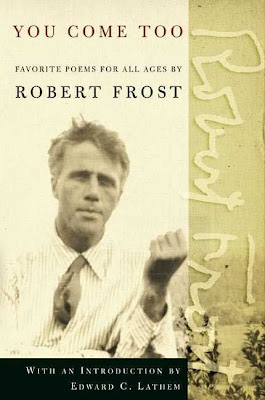 I've spent a bit of time recently searching all the bookshelves for my old Robert Frost school poetry book. I kinda thought that it would be sweet to read to Jemimah from my old book, and to discuss what I'd written in the margins and whether she agreed. Sadly, the book, it appears, is AWOL, and so we're beginning the term instead with Frost's own selection of his poetry for young people, You Come Too, Favourite Poems for Young Readers. Possibly, despite the nostalgia, this is a better choice anyway, since despite their apparent simplicity, Frost's poems often contain levels of meaning below the surface, and it is good to begin with the simpler poems that the poet, himself, thought appropriate. As Jemimah heads into AO6 I want her to advance from understanding merely the basic story of a poem to understanding the meaning behind the words, and this selection of poetry is an ideal one with which to make this move.

Certainly, more than any other poet's work that we've studied so far, Frost's works benefit from subtle helps with interpretation to enhance the pleasure of the poem. The challenge for me as teacher is to introduce this type of deeper thought about the verses whilst ensuring that it does not become the type of painful analysis that gets between the poet and his audience. I remember thinking at school that authors would be horrified if they saw what teachers were reading into their work. I really believe a significant portion was dreamed up in the hallowed halls of some university lit department somewhere, and didn't occur to the writer at all.

Frost's poems are beautiful and powerful, and I want my daughter to think as fondly of them in later years as I do, and yet I also want Jemimah to appreciate as much of what Frost was, in fact, trying to say behind the words as she is able. Robert Frost himself said, "Every poem is a new metaphor inside or it is nothing", implying, I think, that the surface meaning of a poem is only the beginning, a jumping off point, as it were. Frost's poems grow with meaning and depth of thought as you read them over and over, and it would be a pity to leave kids with nothing more than the obvious in the poem.

On the other hand, if course is the dreaded over-analysis I was talking of earlier. Stopping by Woods on a Snowy Evening is probably Frost's best known poem, and, as such, was being over-analysed in the minutest detail even in the poet's lifetime. Much, more is read into this work than what Frost intended for the short and simple piece. Frost, himself, was annoyed by this, saying that they were “pressing it for more than it should be pressed for. It means enough without its being pressed…I don’t say that somebody shouldn’t press it, but I don’t want to be there.”

So what are we doing with these lovely collection? Mostly we're just reading it. Sometimes we're discussing a poem, or comparing it with another piece of writing or an experience that we've had, or a story from history, or talking about how the words make us feel or what we picture in our heads when we read. We read a poem over again, just because we like it. Sometimes we read a poem from yesterday or from last week. We enjoy the beautiful poetry from this exceptional poet.

I have lovely memories of my time with Robert Frost when I was at school. His poems have remained with me, and as I've grown in years, and hopefully in knowledge, and wisdom and experience, the poems have grown in significance with me. That's what I want for Jemimah.