Tomorrow at 11 am our family will down pens and observe a minute of silence to remember those who have died for Australia in wars and conflicts. But what is it that we will actually be remembering?

It was ninety years ago tomorrow, at 11 am on 11 November 1918, that the guns of the Western Front finally fell silent after more than four years of continuous fighting. The allied forces had driven the German invaders back after having inflicted heavy defeats upon them during the preceding four months. In November the Germans called for an armistice - a suspension of fighting - in order to secure a peace settlement. They accepted the allied terms of unconditional surrender.

The 11th hour of the 11th day of the 1tth month attained a special significance in the post-war years, and became universally associated with the remembrance of those who had died in the First World War.

On the first anniversary in 1919 , Australian journalist Edward Honey proposed a two minutes' silence, which was instituted as part of the main commemorative ceremony at the new Cenotaph in London. The two minutes' silence was popularly adopted and it became a central feature of commemorations on Armistice Day.

After the end of the Second World War, the Australian and British governments changed the name to Remembrance Day since the day commemorated all dead not only those who had died in the Great War.

After the minute of silence we will read two books to commemorate Remembrance Day. 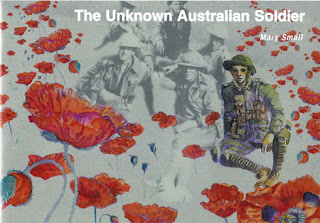 The paintings by Anne Langridge overlay original black and white photographs from the Australian War Memorial archives. The book is available to purchase online from the ANZAC Day Commemoration Committee of Queensland bookshop, who publish it.

The book would not be classed as high class literature but is packed with interesting information held together by a lightweight story which holds Jemimah's attention well enough...and it's Australian!!

The second book is In Flanders Fields: The Story of the Poem by John McCrae, by Canadian Linda Granfield and illustrated by Janet Wilson.

This lovely book is a tribute to the famous poem, its creator, John McCrae, and to the poppy which has come to symbolise remembrance of the fallen in battle.

Lines of the poem are interwoven with background information about the First World War, details of daily life in the trenches, accounts of poet-doctor John McCrae’s experiences in the field hospital and a description of the tragic circumstances that led to the writing of the poem in 1915.

The beautiful paintings by Janet Wilson interpret the poem line by line, making it accessible by even the youngest children.

This one is a beautifully written book, enjoyed by both parents and kids in our home.

You can buy it online from the wonderful Mary Collis at Homeschool Favourites. (Thanks, Mary!)

In Flanders fields the poppies blow
Between the crosses, row on row,
That mark our place; and in the sky
The larks, still bravely singing, fly
Scarce heard amid the guns below.

We are the Dead. Short days ago
We lived, felt dawn, saw sunset glow.
Loved, and were loved, and now we lie
In Flanders fields.

Take up our quarrel with the foe:
To you from failing hands we throw
The torch, be yours to hold it high.
If ye break faith with us who die
We shall not sleep, though poppies grow
In Flanders fields.