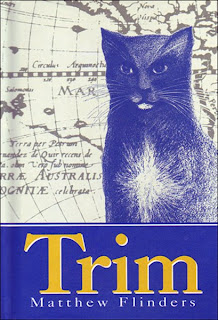 It came somewhat as a surprise to me to discover that Matthew Flinders, as well as being a brilliant navigator, cartographer and explorer, was also a writer of considerable ability. His delightful 18th century prose reminds me somewhat of Jane Austin - of whom he was a contemporary.

Flinders' Biographical Tribute to the Memory of Trim was written during his imprisonment on the island of Mauritius in 1809. It is a delightful piece of whimsy, elegantly and verbosely written, and yet well within the grasp of a child raised on the living books of Charlotte Mason. Let's take a bit of a look at this "contrived little essay", shall we?

A description of his person will not be misplaced here. From the care that was taken of him, and the force of his own constitution, Trim grew to be one of the finest animals I ever saw; his size emulated that of his friends of Angora: his weight being from ten to twelve pounds according as our fresh-meatometer stood high or low. His tail was long, large, and bushy; and when he was animated by the presence of a stranger of the anti-catean race, it bristled out to a fearful size, whilst vivid flashes darted from his fiery eyes, though at other times he was candour and good nature itself. His head was small and round- his physiognomy bespoke intelligence and confidence - whiskers long and graceful, and his ears were cropped in a beautiful curve. Trim's robe was a clear jet black, with the exception of his four feet, which seemed to have been dipped in snow, and his under lip, which rivalled them in whiteness. He had also a white star on his breast, and it seemed as if nature had designed him for the prince and model of his race: I doubt whether Whittington's cat, of which so much has been said and written, was to be compared to him.

One can clearly see from his account how much pleasure our intrepid explorer gained from his acquaintance with his four-footed friend. Trim gives us a look at Matthew Flinders the man. We see him as loving, tolerant and humorous. He has a great deal of affection both for Trim and also for the men who were his crew. He was clearly a likable man. The book also gives us an inside look into early nineteenth century shipboard life and brings to life an era of history extremely important to Australian children.

Let him, on the contrary, linger pleasantly over the history of a single man, a short period, until he thinks the thoughts of that man, is at home in the ways of that period. Though he is reading and thinking of the lifetime of a single man, he is really getting intimately acquainted with the history of a whole nation for a whole age. Charlotte Mason, Home Education pp 279

We read Trim in AO2 Geography, as a substitute for Holling's Tree in the Trail, but it could also be read for history. Clearly Miss Mason would have approved!
Trim was ignored for many years and was published for the first time in 1973 in the literary magazine, Overland. It was subsequently published by Angus and Robertson in an inconvenient pocketbook sized book with small print but with cute pictures by Annette Macarthur-Onslow. This version is still in print and can be purchased from The State Library of New South Wales, who also, believe it or not, sell a stuffed toy Trim with real rabbit fur coats. (DNA certified and taxonomic tested to be made with dyed and tinted rabbit pelts, a by-product of food farming in the Shandong Province, China!) An extensively abridged version was also published by Collins in 1977. I don't recommend this out of print version, although it is nice to see Macarthur-Onslow's illustrations full size. Trim is also available online.

To the memory of Trim
the best and most illustrious of his Race,
the most affectionate of friends,
faithful of servants,
and best of creatures.
He made the Tour of the Globe,
and a voyage to Australia,
which he circumnavigated, and was ever the
delight and pleasure of his fellow voyagers.
Returning to Europe in 1803, he was shipwrecked
in the Great Equinoxial Ocean;
This danger escaped, he sought refuge and assistance
at the Isle of France, where he was made prisoner, contrary to the laws of
Justice, of Humanity, and of French National Faith;
and where, alas! he terminated his useful
career, by an untimely death,
being devoured by the Catophagi of
that island.
Many a time have I beheld his little merriments
with delight,
and his superior intelligence with surprise:
Never will his like be seen again!
Trim was born in the Southern Indian Ocean,
in the Year 1799, and
perished as above at the Isle of France
in 1804.

Peace be to his shade, and
Honour to his memory