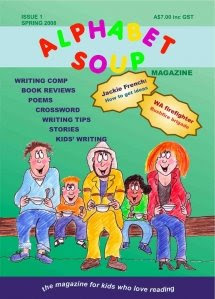 Regardless of what you think of the jolly fat man in the red suit, you've gotta admit that he's pretty good at gauging the level of twaddle and rubbish that goes into each child's stocking. Some kids' stockings are filled with Bratz dolls, The Day My Bum Went Psycho, The Secret Seven and Morris Gleitzman books - ours aren't. Theirs contain colour-within-the-lines activity books - ours don't. Some have chocolates, lollies and chewing gum - not ours...(okay, there's always chocolate - who am I trying to kid?)

Now you are entitled to your opinion of Andy Griffiths, Enid Blyton and Morris Gleitzman as authors. You can decide how much rubbish your kids are allowed to eat on Christmas Day - what I'm trying to point out is that Santa seems to know your cut off point - intuitively. Call it Christmas magic, fairy dust or clever elves - whatever it is, Santa is one pretty clever old man..

Unfortunately, at 6 3/4, Jemimah's twaddlometer is not so finely calibrated as Santa's is. She is instantly attracted to anything glitzy, glimmery, sparkly or shiny. She loves Charlie and Lola and she's pretty keen on Bratz dolls too, even though she know I don't approve of dolls that wear fishnet stockings and sexy bikinis, no matter how gorgeous their hair is. She's also really keen on trashy (to Santa and me) preteen girl's magazines - Totalgirl or Barbie, for example - especially if they contain some cool hair fastener or even better some lip gloss or eye makeup (Come on - Barbie's aimed at 5-8 year olds, for goodness sake; Totalgirl from 6-12!).

I don't have anything against magazines per se - a glance at my coffee table is likely to reveal an issue or two of Kateigaho International Edition - to partly assuage - or maybe to fuel - my passion for Japan's Arts and Culture. (The 2009 Winter edition arrived the other day - I can't wait to read about the culinary art of makizushi; shakyo calligraphy; teahouse games; and the beautiful resort of Tenku no Mori in the Kirishima mountain range.) You also may find me fantasising over the latest copy of The English Garden or cooking up a storm in the kitchen with the latest Donna Hay open in front of me.

No, my issue is not the idea of her reading a magazine - it's the content. Call me old fashioned, but I don't want my 6 year old knowing about the latest pre-teen celebrity disaster. I don't want her reading an article that tells her to lose weight or how to style her hair to attract boys and I don't want her seeing advertisements showing girls in sexy poses and wearing T-shirts with "Flirt" written across the chest. Most children's magazines are at best full of twaddle and at worst, morally dangerous.

This year Santa has come to the rescue yet again. Come Christmas Morning, Jemimah will find peeking out the top of her Christmas Stocking an entirely parent approved present - the latest edition of a brand new magazine for young Aussie kids, Alphabet Soup.

There are no gimmicks - no glittery toys or enticements to buy – this is simply a magazine for kids 6-12 that is aimed at kids who love to read and love to write - Charlotte Mason educated kids - kids like Jemimah. The debut issue is out now. When Jemimah settles down to read it after lunch of turkey and plum pudding, she'll find an interview with children’s author Jackie French, book reviews, stories and poems and lots of kids writing. There's a writing competition that she may decide to enter, writing advice and a nonfiction piece about volunteer fire fighters.

Santa assures me that she'll love the bright front cover and the fun child-like illustrations on every page. He says she'll have no trouble with the large, clearly spaced type. You know, I trust Santa so completely that we've subscribed for a year - and it was only $25.00 too.