Anthony looked forward, too. to special seasons as well as to special days. There was the blackberry season, and the season of snow. Snow never disappointed. It came and went unexpectedly, you could not exactly count on it, so you did not depend on it. But while it was there you enjoyed it to the full. The fun of snow never palled, and was a good this winter as last.

But blackberrying disappointed. Anthony depended on the blackberries to be plentiful and splendid. They were sometimes as plentiful, but seldom as splendid as they were last summer. They were not big enough or black enough, he was never picking the very best bush in all Somerset. It was only the best bush in Somerset that Anthony wanted. When he was picking one bush, the best one was the next; when he flew to the next, it was that one farther on -- and this one was not so good, after all, as the one he had just left. Often when Anthony got home, and turned over his harvest, the fruit seemed hardly good enough to give to his Mother. Before he took it to her he fetched the inkpot, and enriched the biggest berries in his basket; laying these at the top, he took his offering to his Mother’s room. She accepted it admiringly, and, his cheeks and fingers smeared with blackberry juice and ink, he went away, almost satisfied, thinking his Mother really believed in his blackberries. He nearly believed in them himself. He had nearly made them as good as he hoped they would be, and as God had failed to make them.

But his Mother sighed a little and smiled a little, because the world was not quite all that Anthony longed for it to be.

From Anthony Goes Blackberrying by Eleanor Farjeon in Kaleidoscope 1928

Travelling home from our weekend camp at the beach we made a detour to our favourite brambling site to check whether the blackberries were ripe. Oh joy!! Oh delight!! They were...and we're having blackberry and apple crumble for dessert tonight!!

In some ways the blackberrying disappointed...as Anthony would say. The ongoing drought has resulted in fruit that is not big enough or black enough. Fortunately they were plenty good enough for this mother!! 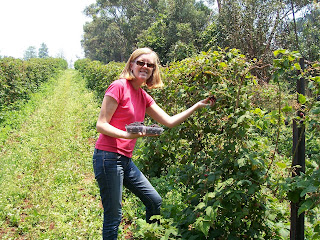 Picking raspberries at a berry farm

Brambling is a summer tradition for us. We always like visit a berry farm to pick raspberries and other fruits, but nothing beats a day outside picking succulent wild blackberries. True, they're cruel beasts, impossible to pick without scratches, prickles and stains, but family folklore says that every scratch earns you a berry - more than adequate compensation for a little pain, in my opinion!! We ate lots. Sometimes we ate a berry because of a scratch - more often we ate a berry because it was a perfect berry - succulent and juicy. What better reason is there than that?

Like Anthony we were often thwarted in our quest for the perfect berry. It's not that we were looking for the perfect bush in Somerset - or even in Victoria - its just that it always seems that the best berries are located just out of reach in the middle of the biggest thorniest bush there. You can see the perfect juiciest berry - you can smell it - you can almost taste it; but no matter how many thorns you're willing to endure you just can't quite reach it. Why is that?

If you have never been brambling yourself and want to give it a go, here are some helpful hints:

Berrying brings with it other summer traditions - blackberry and apple crumble and raspberry gin. We make jam too - buckets of it. Raspberry's my favourite, but blackberry's delicious as well. We put berries into pies and clafoutis, use them to make summer pudding and add them to stewed apple. We even add them to breakfast muesli - our favourite.

Jemimah's the Crumble-Queen in our family. She sits up on our kitchen bench, hands and arms covered in delicious crumble topping. Here's her recipe:

You can process this in a food processor until it resembles fine breadcrumbs, but Jemimah always makes ours the old fashioned way, rubbing the butter between her fingers. Somehow it tastes better this way. We divide the quantities above into four glad bags and freeze three.

You can use any fruit you like for a crumble. Our favourites are apricot, apple, apple and rhubarb, apple and blackberry and nectarine (probably because that's what we have!) We like to cook the fruit briefly in a bit of water before adding it to the pie tin. Otherwise it stays a bit hard. We don't cook the berries first though.

We use 800g fruit, give or take, with about three tablespoons of sugar - more for rhubarb.

Just add the fruit to a pie tin, sprinkle with sugar and top with one of the bags of topping. You don't need to defrost it first.

Bake in the oven for half an hour at 160°C or until the top is golden brown. Serve with custard and vanilla icecream.

Jemimah makes this by herself - it's that easy!!

We have a favourite jam recipe too. We mostly make raspberry jam. If you make blackberry jam - especially with small drought stricken wild blackberries, you'll need to cook it for an extra ten minutes or so.

Bring slowly to the boil, ensuring all the sugar is melted before it comes to the boil. Mush the berries slightly to release the natural pectin in the fruit. Boil fast 8-10 minutes. Remove from heat and test that setting point has been reached.

If you don't know how to do this, here's how it's done:
Place a teaspoon of the hot jam on a chilled saucer and refrigerate until just cold. Run a finger through the jam. if the surface wrinkles, the jam is done. If not, cook a little longer and try again!) 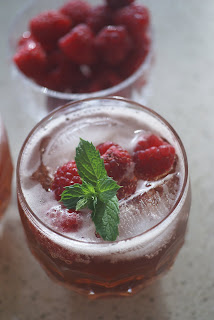 If you want to try raspberry gin, we use a recipe similar to this one. I don't know a much better drink for a hot summer's evening than a measure of raspberry gin topped up with lemonade and some fresh raspberries - summer in a glass!