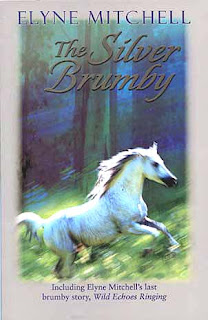 I've read a couple of great blog posts recently about Elyne Mitchell's The Silver Brumby, one by Mama Squirrel at Dewey's Treehouse and the other by Amy at Quo Vadis, prompting me to haul out my copy of this classic Australian living book to read for our family read alouds. These books are read slowly, because the rule is that everyone must be available to listen to them - including Daddy.

Well, it's being received as well by this generation of our family as it was by me. Elyne describes the beauty of the High Country so that you feel like you've been there. Her horses behave like...well...horses, and although they can speak, they're not anthropomorphised in any other way. That's a good thing to me. I can't stand animals that prance around like men instead of horses.

Elyne wrote The Silver Brumby story for her eldest daughter Indi in 1957,when Indi was 10 years old. She was not impressed with the reading matter available for girls, and was unhappy with the lack of Australian content in the books that were available. She wrote The Silver Brumby using the mountains that surrounded their home as the setting, and the brumbies that inhabited them as her characters, and Indi, who was ‘crazy about ponies', was soon‘waiting at the typewriter for the next instalment'. I think this is what makes this novel a living book. As well as being an interesting story, it describes the eastern Australian terrain and wildlife in accurate detail, and you learn a great deal about the nature of the horses as you read.

Elyne and a party of her friends makes a cameo appearance in The Silver Brumby. They're the skiers who lasso the bay colt and souvenir some of his tail hair. Elyne was a keen skier and horsewoman. She won the Canadian downhill skiing championship in 1938, and in 1941 she became the first woman to descend on skis the entire western face of the Snowy Mountains!

Elyne Mitchell was the daughter of General Harry Chauvel, commander of the ANZAC Mounted Division Light Horse and Desert Mounted Corps in World War I. He played a significant role in the charge at Beersheba on 31st October, 1917, and Elyne wrote about her father's life in her non-fiction book, Light Horse: The Story of Australia's Mounted Troops, published in 1978. It was this connection with the Charge of Beersheba that resulted in Elyne being approached by Australian screenwriter Ian Jones to write the story of his beautiful 1987 film, The Lighthorsemen, and her book of the same name was published on the film's release..

It is here that I must declare my conflict of interest. Although not Elyne's best book - I think The Silver Brumby is much better written - The Lighthorsemen will always hold pride of place on my bookshelves for one reason...the character known as Scotty Bolton in the book is my grandfather!! Grandpa is the subject of many books, and no doubt I'll skite a little more about him in the lead up to ANZAC Day, but I couldn't let a review of Elyne Mitchell's books pass without just a little boast! 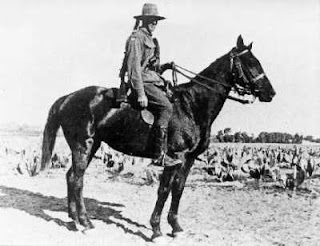 Grandpa astride his favourite horse, 'Monty'.
The Silver Brumby was republished in 2003 after many years out of print by Harper Collins.

You can buy it online along with several more of the series in the series here. Alas, you'll have to buy The Lighthorsemen from my good friend Abe.
Posted by Jeanne at 24.2.09