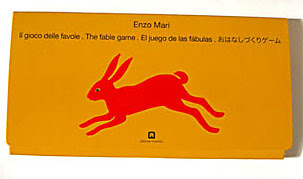 I was going to tell you all that this was a 'must have' resource for AO1 and Aesop's fables, however, having googled the price in preparation for writing this post, I now know that I was wrong. This is not a 'must have'; it is a luxury.

It is a pretty good luxury, though, so I'm going to tell you about it all the same. You can make up your own minds then about whether you go without bread and milk - or worse, chocolate and coffee - for a week so that you can afford the current exorbitant AUD$52.00 asking price. Mind you, the price tag is still on the back of mine, so I know that I didn't pay anywhere near that price. Perhaps you'll be as lucky...

The Fable Game was created by Italian designer Enzo Mari in 1965. Mari creates objects, furniture and textiles destined for industrial production. He also creates books.The Fable Game isn't a book, though. It's not a game either. It's a...well, it's an...um..it just is. That's all. It's a set of cards about 30cm wide and 15 cm high. On the card are the characters from the fables: the fox; the hare...and tortoise; the ass (sorry, donkey)...and the lion; the wolf and the lamb. 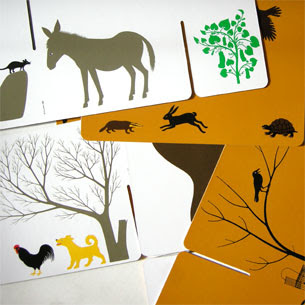 The cards interlock to tell the stories - like this: 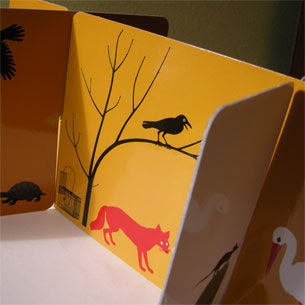 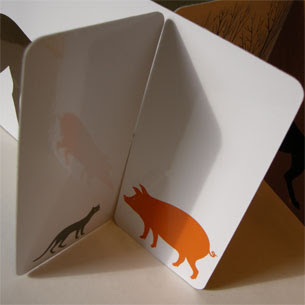 I'm supposing that by now you're realising the potential for this...um...game in your AO1 child's narration of Aesop, aren't you? You'd be right if you think it'd be great. It is fantastic! The cards interlock in endless ways, making for an endless variety of stories, both the ones written by Aesop, and the new ones 'written' by the child. With this game in their hands, a child's imagination literally gallops away with them. It's great to witness.

Jemimah and I loved this game in AO1. I'd hesitate to say you can't live without it, after all it would take something pretty special to make me give up either coffee or chocolate, let alone both. The Fable Game would come pretty close, though.

P.S. I didn't take the pictures. I got them from one of my favourite blogs: Book By Its Cover.
Posted by Jeanne at 18.3.09