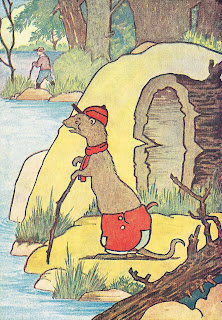 Billy Mink illustrated by Harrison Cady
It's funny how time flies when you're having fun. In another month we'll be finished AO2 term 1 and we'll be up to exams. Now as Jemimah's mummy and teacher, I know pretty well where she's at with most subjects. I know that she needs to spend more time practicing her times tables or she's going to have trouble getting her maths exam done in the time allowed. I know that she needs to work out some strategy to remember the order of the 10 Commandments or she will have trouble when it comes to recite her memory passage. I know that she still has problems with proper nouns and would far prefer to use a common noun instead, substituting 'the king' or worse, "he" for 'King Stephen' for example. There is a great unknown this time though and I'm quite curious to see the results...

Will Jemimah be able to untangle the huge list of mammals in The Burgess Animal Book For Children that she has studied this term and be able to give me a meaningful narration about any of them? Will she be able to draw me a picture of one, or tell me any of the distinguishing features? Can she name any members of the squirrel family, the rat family - or the mouse one?

To tell you the honest truth, I don't think she will. Why? Because I would struggle myself. Now that's not necessarily a good reason, and Jemimah has gone on to pleasantly surprise me in the past, but I just suspect that this book has too many animals in too quick a succession for her to be able to get them all right in her head without significant extra work - the type of work that I believe Miss Mason would have described as coming between the author and the child. Her definition of a Living Book was one that spoke for itself.

Since all of the animals in this book (except for Peter Rabbit and Jumper the Hare) are unknown in Australia, I suspect that we Antipodeans may be at quite a disadvantage here. While not even our Northern cousins would be familiar with the differences between a collared and a brown lemming or Abert's and a Kaibab squirrel, I'm guessing that most American kids would know what a squirrel was - or a chipmunk - or a woodchuck. I suspect that many would have seen a beaver dam - and probably be friendly with Paddy Beaver himself. I'm thinking that these familiar animals would provide knowledge pegs for the child to build upon... You know what a woodchuck looks like, don't you? Well a prairie dog is different because... You get the idea. Without these pegs, I think that all these animals are turning into a great big rodential megamammal with characteristics of all and features of none.

Anyway, only time will tell. In five weeks I'll be able to report on the result of Jemimah's exams. I hope I'll be pleasantly surprised.

All practicalities aside, we are enjoying this book. Thornton Burgess (1874-1965) gained a deep appreciation for nature early in his life. His output was prodigious - Burgess wrote over 170 books and 15,000 stories. He clearly had a deep love of birds and animals and his beautifully written books reflect this affection. Despite our difficulty in keeping the animals straight, both Jemimah and I look forward to the endearing stories of Old Mother Nature and her school, and we read them with pleasure. While reading the chapter we look at a picture of the animal in a book of photos put together by Wendy Pike, a wonderful AO mum who provided pictures free to anyone who asked for them. (If you do a search of Wendy's name on the AO yahoo group, this post comes up. You may be able to email Wendy if you're keen for your own copy.) Jemimah's narrations after the reading are lively and full of attention to detail - and detail there is in this book.

Within the pages of the book, we have come to know many of the characters that Thornton Burgess writes about in his other books and stories: Peter Rabbit, Jimmy Skunk, Sammy Jay, Bobby Raccoon, Little Joe Otter, Grandfather Frog, Billy Mink and Jerry Muskrat amongst them. Many of these characters star in Burgess' Bedtime Story-Books. Now this series really bring the animals to life - in a way that I don't believe that The Burgess Animal Book for Children achieves. Each of book of this series concentrates on an individual species and through the pages you come to really know the animal.

As smart and clever as you are,
A Mink may smarter be by far.
Billy Mink.

We found The Adventures of Billy Mink in a second-hand bookshop many years ago, and bought it for $8.00. Through its pages we got to know Billy and his kind. We learned about his food, his home, his food preferences and his habits. We came to know - and to dislike his preferences. To this day, Jemimah has a great deal of affection for the mink - and she knows a considerable amount about them.

The jury is out. Is it better for a child in AO2 to know a little about lots of animals or a lot about a few? I'm inclined that Miss Mason would advocate learning a lot about a few as she does in men from the pages of history. Anyhow, we'll see how we go.

So, given that we have none of these mammals in Australia, is it worth using Burgess' books in the Great Southern Land? Well yes, I think so. It's really hard to enjoy Wind in the Willows of you don't know what a mole and a badger are. Beatrix Potter would be a bit of a mystery without knowledge of a squirrel and a hedgehog how could we follow Laura through the Big Woods without worrying about a panther or a bear! Knowing only about Australian animals and Australian things would make us very insular indeed.

Australia doesn't really have an animal author of the calibre of Thornton Burgess. He really stands alone in his ability to kindle in our children an appreciation for those critters who live out in God's beautiful creation. We do have a man who comes close, however.

His name is Charles Kenneth Thompson. Ever heard of him?

Born in 1904, C. K. Thompson (1904-1980) was Burgess' contemporary. He lived most of his life in the Hunter region of New South Wales. A journalist by profession, he was for several decades a court reporter and sub-editor at the Newcastle Sun. After authoring several books for adults, in 1945 he published a story about a grey kangaroo called Joey in his novel, King of the Ranges. Joey is a small kangaroo orphaned before his mother could fully impart to him all the bushlore that bush creatures need to fend for and protect themselves. Joey undergoes many trials before he finally becomes King of the Ranges. It's a great story, and much as in Burgess' Bedtime Story Books, you learn heaps about the Grey Kangaroo on the way.

Thompson writes about animals and birds as they are. He doesn't anthropomorphise them - nor does he see them through rose-coloured glasses. He tells it like it is.

Books by C. K. Thompson in the same series include:

*King of the Ranges (Grey Kangaroo) 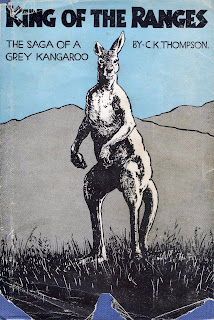 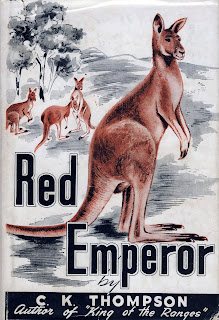 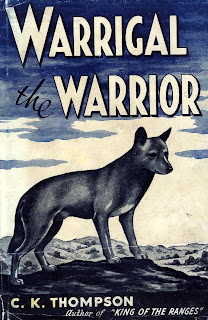 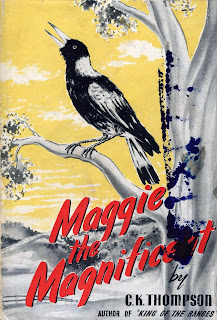 Wild Canary (I haven't seen this book, but presume that this is a zebra finch!)

One last book of C. K.'s is well worth a mention: Old Bob's Birds. 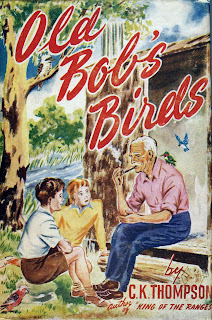 Old Bob is a swaggie. In the book he imparts all his knowledge about the birds he has met during a lifetime of wandering to his two young friends, Roddie and his sister Susan. With a chapter on each bird, this is an excellent substitute for The Burgess Bird Book For Children. We use it in AO1.