Negotiating a trail through 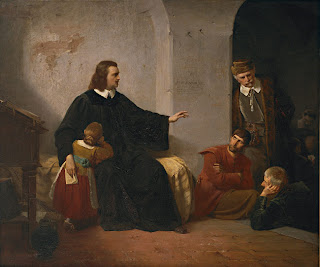 As I walked through the wilderness of this world, I lighted on a certain place where was a Den , and I laid me down in that place to sleep: and, as I slept, I dreamed a dream. I dreamed, and behold, I saw a man clothed with rags, standing in a certain place, with his face from his own house, a book in his hand, and a great burden upon his back. I looked, and saw him open the book, and read therein; and, as he read, he wept, and trembled; and, not being able longer to contain, he brake out with a lamentable cry, saying, "What shall I do?"

Thus begins the world's best selling book after the Bible, John Bunyan's The Pilgrim's Progress. It is one of my favourite books - and it seems that I am not alone in this affection. Highly regarded as one of the most significant works of English literature, this book has been translated into more than 200 languages, and has not been out of print since it was first published in ...wait for it...1678.

Its inclusion in the Ambleside Online curriculum was one of the many things that attracted me to this wonderful curriculum, and yet as the time came for me to select a version to use with Jemimah, I found myself feeling almost as confused as Christian was when faced with many roads to take, all of which would lead him to the Celestial City. There are so many versions of this wonderful book that I 'knew not which road to take'.

First, a confession. Ahem...let me clear my throat...

Hello, My name is Jeanne and I am a Pilgrim's-Progress-aholic...