One in a thousand 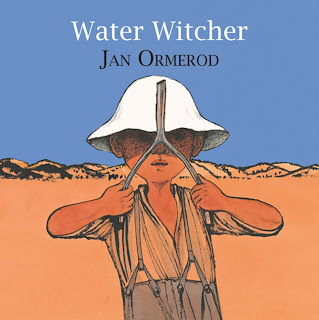 My charming neighbour, Barney, is a 'water-witcher'. He tells us that an underground stream runs through the corner of his property and on into ours. He tells me that if we drill a muckle big and ugly hole in the back corner of the Native Garden we'll find enough water for our garden for years...or forever...he says. Unfortunately, he can't tell me if the water will be fresh or brackish...

Apparently there is a great subterranean river running through our town. With the ongoing drought, and no water, people have become more willing to accept the possibility that maybe, just maybe, there might just be something in this water-divining business, and they've actually gone ahead and drilled where Barney has told them to. Mostly they've struck water. Sometimes it has been fresh, clear usable water too.

You'll notice that we haven't. Call it my cynical scientific mind, but I have a lot of trouble believing things that can't be explained scientifically (except creation...and anything in the Bible, but that's what faith is, isn't it?).

Reputable geologists, the type I believe without even checking their facts, assure us that there is a great supply of ground water beneath the earth's surface, and that a great aquifer does in fact lie beneath much of our town. Because the water table has not been lowered too much by the over use of this water in the past, useful amounts of it occur in several areas.

So where does this leave Barney?

Well, I think it leaves him in the enviable position of being more likely than most water diviners to 'get it right'. There is more water down there, so it is more likely that he will randomly guess right and find some, wherever it is we drill.

To me, water divining is a superstitious practice based on ignorance. Because we can't see ground water, it becomes something of a mystery. I think it is because ground water is somewhat magical itself, people are more likely to accept the claims of nice people like Barney who say that they have some special gift for finding ground water using a forked stick wound with coat hanger wire. Barney claims that the special magnetic force running through the water makes the wire bend towards it when he stands right above it. Umm...magnetic water?

Anyway, now that I've got down from my soapbox, let's get back to living books in general and Jan Ormerod's Water Witcher specifically.

Dougie's grandfather had the rare and mysterious gift of water witching. It's a drought and it's the Depression.

Dougie and his sisters can’t remember the last time it rained. The rainwater tanks are empty, and the creek is just a string of muddy pools. They can see the tracks of animals that come seeking water.Each day Dad and Dougie cart water from Last Stop Well, an hour down the track. They haul the water up bucket by bucket to fill the tank on the dray, then bump back over the ruts, making clouds of dust. The crops are brown and crisp in the sun.

Dougie wishes he were a water witcher — then they would have a well of their own, always full of water. So Dougie teaches himself the art of water divining. His sisters tease him. Even his mother doubts, but despite it all, Dougie keeps on trying:

It has to do whatever it does, no matter what I'm thinking about.

"You are one in a thousand, son," says Dad proudly.

"You are a water witcher, just like your grandfather."

Water Witcher brings rural Australia to life. We really see what it was like to live in Australia during that incredibly hard time in our history. That's what a true living book does, and Jan Ormerod does it incredibly well in this book.

Whether you explain to your kids that water witching is just a superstition, or whether you allow it to stand as a cute story in itself will be up to individual families. I did explain to Jemimah that we didn't believe it was true, and it didn't prevent her enjoying the book.