The Australian bunyip didn't loom large in my consciousness as a child. The mythical creatures of my formative years were the hobyahs - probably, well, okay definitely, as a consequence of my mother and her sisters' nostalgic affection for the story from Book Two of The Victorian Readers of their childhood. The result was that the hobyah's came 'creep, creep, creeping' into my bedroom in much the same was as they crept into the dreams of my mother and my aunts all those years before.

Fortunately, the bunyip wasn't completely excluded from my upbringing, however, because in 1973 Jenny Wagner published The Bunyip of Berkeley's Creek - too late for me, maybe, but not too late for my younger sister. Better late than never, I came to love it too. 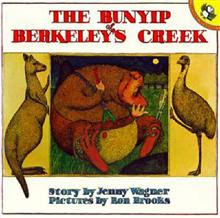 I still feel sad when I read this wonderful but haunting picture book . It tells the story of a bunyip that emerges from the muddy bottom of Berkeley's Creek to ask the question:

A passing platypus solves the riddle:

You are a bunyip.

Bunyips are "horrible," the wallaby tells him, "horrible" With "horrible tails, and even more horrible fur," adds the emu. Finally he meets a man...

Starting to feel sad yet? The bunyip was shaken - as you would be. It's not every day you're told you don't exist. The bunyip walks away to a quiet, still billabong, where he can be as handsome as he likes. Things are looking dark and lonely until late that night something emerges from the muddy bottom of the billabong to ask the question:

This time it is the bunyip who knows the answer to the question, and he jumps up in delight.

You are a bunyip! You look just like me.

Bunyips originated in Aboriginal folklore well before European settlement of Australia. They must be one of the few dreamtime creatures to cross the cultural divide and to become as popular among our early colonial settlers as they were amongst the Aboriginal and Torres Strait Islanders.

As our children pass through the pages of Australian living books, they'll come across the bunyip time and time again. Take this section in Ethel Pedley's Dot and the Kangaroo as an example.

From the desolate morass, and from the gully in darkness below, came the sound of a bellowing. She stopped crying and listened, and could hear those awesome voices all around, and the echoes made them still more hobgoblinish. The Kangaroo's eyes brightened, as she restrained her panting, and listened also.... "The Bunyip! the Bunyip!" and they tumbled over one another in their hurry to get away from a place haunted, as they thought, by that wicked demon which they fear so much. At full speed they fled back to their camp, with the sound of Dot's cries, and the mysterious bellowing noise, following them on the breeze; and they never stopped running until they regained the light of their camp fires.

They'll read how Snugglepot and Cuddlepie go to war against the bunyip in May Gibb's The Adventures of Bib and Bub, and meet him again in Patricia Wrighton's novel The Ice is Coming:

It was a thing of many kinds that could not be truly seen, but its red eyes were like death and its bellow was like fear. It was like a calf, like a seal, like a man; it was white, it was black … It was all these things, together and separate, in one fearful beast … It was feathered, or furred, or scaly. You could not tell what it was except that it was dreadful …

The Bunyip of Berkeley's Creek is a great introduction to the bunyip. Don't miss it.


If I've piqued your interest in this fascinating creature, The National Library of Australia's online exhibition, Bunyips, is unbeatable. This award-winning animated site tells the story of the Bunyip over the years and how it has been represented in art, literature and living culture. It is great!