A Picnic at Hanging Rock 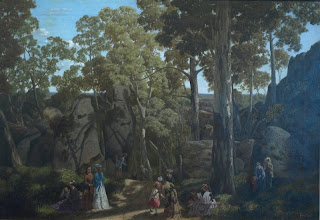 At the Hanging Rock 1875 -William Ford

Everyone agreed that the day was just right for the picnic in Hanging Rock - a shimmering summer morning warm and still, with cicadas shrilling all through breakfast from the loquat trees outside the dining-room windows and bees murmuring above the pansies bordering the drive.

My husband loves to watch Rebus on the tele. He doesn't watch primarily for the plot - although he's quite a fan of the battle weary cynic of a detective and his quest to rid Edinburgh of its miscreant underbelly - no, hubby watches for the scenery. You see, my husband is an Edinburgh University man, and spending 10 years in a town as a student creates an incredibly nostalgic affection for that place and time. When hubby watches Rebus battling crime in Edinburgh's underworld he sees his Haymarket, his Arthur's Seat, the hallowed cloisters of his alma mater and his Museum of Scotland. He remembers the Edinburgh of his youth.

Its funny when the fictional story of a place become greater than the place on its own. I dare say that won't happen in a place the size and age of Scotland's Capital, but it certainly happened on Canada's Prince Edward Island when Anne with an 'E' came to stay. Visit that pretty island nowadays, and you can visit Green Gables, take a ride in Uncle Matthew's carriage, see the pretty rosebud-spray-tea set that was only used for the minister or the Aids and even Gog the china dog - one of the twin guardian deities of Patty's Place (Magog has suffered some damage...). It's hard to believe that you won't see Anne herself. It's hard to believe that she is not real. 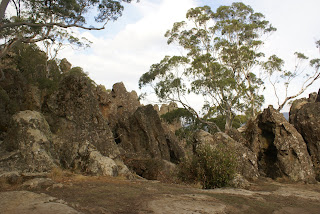 Hanging Rock's like that, a place where fiction and reality merge so cleverly that it's hard to remember what's really true. Joan Lindsay, author of the book Picnic at Hanging Rock, and hence perpetrator of the myth surrounding the rock, doesn't help things either. In the front of her book, first published in 1967, you read this:

Whether Picnic at Hanging Rock is fact or fiction, my readers must decide for themselves. As the fateful picnic took place in the year nineteen hundred, and all the characters who appear in this book are long since dead, it hardly seems important.

Joan Lindsay -from the preface to The Picnic at Hanging Rock. 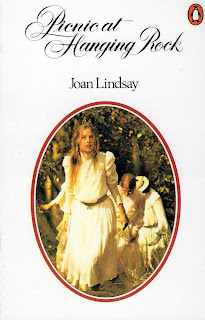 I get ahead of myself.

First, some facts. Hanging Rock, situated about an hour's drive north of Melbourne on the way to Bendigo is one of the world's best examples of a volcanic feature called a mamelon. In this type of volcano, the lava forms a rounded pile of layers on the surface as it is squeezed through a narrow vent in the earth. Because the lava is relatively stiff and not fluid, it doesn't flow away, but rather congeals around the vent, forming a small hill or mound on the surface.

Since its formation, the solvsbergite rock that makes up the mamelon has been exposed to considerable weathering and erosion, resulting in unusual rock formations that can now be seen on the site.

We went there for a picnic ourselves on Good Friday. 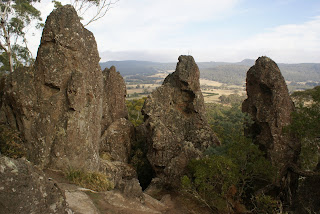 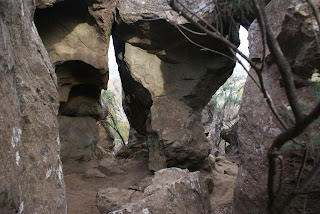 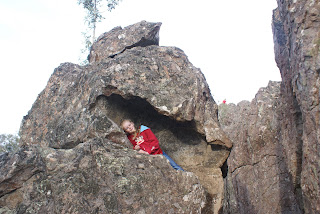 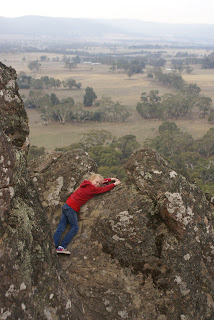 Hanging Rock would always have been a good spot for a picnic - it really is quite a spectacular site:

While they were talking the angle of vision had gradually altered to bring the Hanging Rock into sudden startling view. Directly ahead, the grey volcanic mass rose up slabbed and pinnacled like a fortress from the empty yellow plain. The three girls... could see the vertical lines of the rocky walls, now and then gashed with indigo shade, patches of grey green dogwood, outcrops of boulders even at this distance immense and formidable. At the summit, apparently bare of living vegetation, a jagged line of rock cut across the serene blue of the sky. 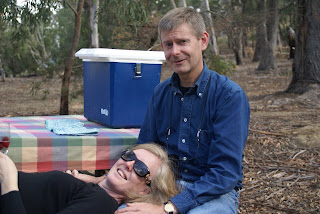 As I say, it would always have been a good spot for a picnic, but it is Joan Lindsay's mysterious story that made it memorable.

On Saturday 14th February 1900 a party of schoolgirls from Appleyard College picnicked at Hanging Rock, near Mt. Macedon in the State of Victoria. During the afternoon several members of the party disappeared without a trace …

The book was quite successful, but it was the adaptation of the story as a feature film by Director Peter Weir in 1975 that the story - and hence the rock itself - became widely known and acclaimed. 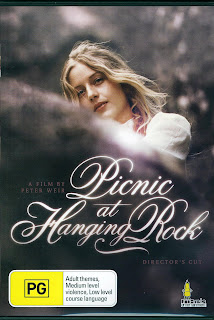 (Caveat emptor: The film and this trailer are rated PG and contain what they describe as 'low level coarse language.)

The book, but more so the film, has imbued Hanging Rock with its own eerie feeling of mystery and intrigue. People walk quietly. There is talk of the girls' disappearance everywhere - constant discussions about what really happened to Miranda and the other girls - and everyone knows just who Miranda is.

The answer, of course, is that nobody knows, because the book and the film are merely fiction...or are they?

Regardless of the mystery, one thing is certain: Hanging Rock is a beautiful place for a picnic - especially on misty autumn mornings like Good Friday when we found ourselves looking down on panoramic views of farmland, the enormous rise of Mount Macedon, north to the Cobaw Ranges and across to Woodend and Daylesford.

If you ever get to the Rock, get yourselves a copy of the limited edition reprint of the novel illustrated with images from the film and containing excerpts from the screenplay that is for sale at the souvenir shop. Featuring many never-before-seen images from the production of the film it is a luscious way to read the story, and you'll be contributing towards the upkeep of the Hanging Rock Reserve at the same time. 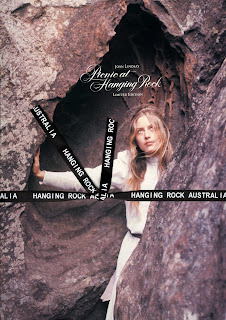