Tell them of us

They shall grow not old as we that are left grow old;
Age shall not weary them, nor the years condemn.
At the going down of the sun and in the morning
We will remember them.

ANZAC Day has great significance to my family. I'm going to take a few days this week to focus on this special day, to share what we do to commemorate, and what's available for us to use with our kids. Thanks for indulging me. I hope you'll find it a useful few days.

The Queensland Cameron Highlanders' tribute in the crypt of the Brisbane Shrine of Remembrance says this:

When you go home tell them of us and say,
for your tomorrow we gave our today.

And so I try - but how do I explain this sense of pride that I feel to Jemimah? How do I pass it to the next generation? How do we explain that we remember the brave soldiers, but do not wish war to come again? How can we instill in our kids a pride in their heritage and a better understanding of the sacrifices made by the brave young men who landed at Gallipoli and those who followed their example in later conflicts?

I believe that Charlotte Mason's secret weapon of learning the pages of history through the lives of a few is the secret. Once more we turn to the pages of living books. 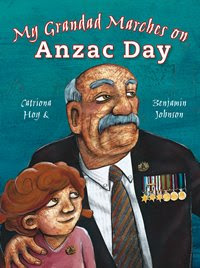 My Grandad Marches on Anzac Day by Catriona Hoy, makes ANZAC Day accessible to even our preschool aged children. The lump in my throat almost prevented me finishing the book the first time I read it.

Once, long ago, there was a war, my daddy says. Many soldiers fought and died in a place called Gallipoli. Some were from Australia. Some were from New Zealand. They were called ANZACs.

They died in places with names like The Nek, Lone Pine and Anzac Cove.

Their mums and dads waited, but they never came home.

In the story, ANZAC Day is seen through the eyes of a young girl who rises early on ANZAC Day to watch her grandad march in the ANZAC Day parade. She shares her day in a realistic way, and Jemimah can easily relate to the little girl and her experiences. She can also relate to the little girl's grandad. She can sense his pride. She can also begin to understand a little about the thousands of man and women who didn't make it home. 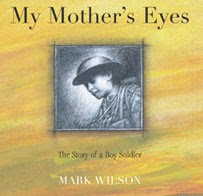 Mark Wilson's book, My Mother's Eyes, was released in March of this year - just in time for ANZAC Day.

William is only fifteen when he lies about his age (like so many other boys) and enlists during the First World War. He is accepted into the Australian Imperial Forces (AIF) and is sent as a boy soldier sent to the battlefields of France.

The boys called it the 'great adventure', but war is not really like that. Even before William reaches Europe - even before he knows what war really is - he’s offering comfort to the wounded soldiers in Egypt, siting and listening so that the injured have someone to talk to.

Eventually William's battalion arrives in Armentières in France. They enter the trenches near the town of Bullecourt.

We don't really know what happens near the end. In a book written for primary aged kids, it's probably better that way. The book gives the impression that William’s family will be one of the thousands torn asunder by the futility of war, that he will never return home.

It's a sad book. I choked up when I read this one too. Now I know I get rather emotional when I read stories about war, but this one touched me in the same way that Cationa Hoy's book did. It made me feel proud and sad and indebted. It made me remember why we remember these brave men and women who gave their lives fighting that I might have peace.