Colin Thiele died on 4th September 2006. You can be forgiven if you missed it though - his death was ignored for another 'far greater Aussie', Steve Irwin. I remember hearing only one report of his passing throughout that long day of media coverage, and wondering why it was that one of the true greats of Australian children's literature had been passed over for...er...crickey...the bloke who hunted crocodiles. Later during our nation's Lady Diana-like outpouring of grief, John Howard our then Prime Minister, called the lovable larikin Steve Irwin a quintessential Australian. About gentle, civilised Colin Thiele, he said nothing at all.

Which was a shame.

About Colin Thiele I can truly say he was a quintessential Australian, and I continue to hold him in my affections. I hope that his work will soon enjoy the revival that it truly deserves - that we will again be able to buy his work in new bookstores instead of combing the shelves of the second hand; that today's children will again read the pages of this amazing wordsmith. For that's what he was - a truly remarkable Australian storyteller. He wrote more than 80 of them too, not just Storm Boy, although I must admit that this, along with Sun on the Stubble, remains my favourite.

In common with Charlotte Mason, Thiele favoured living books for teaching children. One of my favourite of his quotes is truly Masonesque:

Poetry is more powerful than polemics and tales more effective than tracts.

Surely that beats getting chased by a crocodile...

I've just introduced Jemimah to the works of this excellent author. We began with Thiele Tales - Three Long Stories for Children - a marvellous collection of two long short stories, Flash Flood and Flip-Flop and the Tiger Snake, and one story in verse, Gloop the Bunyip. 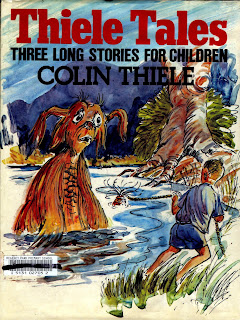 Flash Flood is the story of Even-Stevens. He is nine years old the year he and his family go on a caravaning holiday in the Flinders Ranges.

For three weeks they travelled the Ranges. They camped in places with names that mooed like cows and rang like bells: Aroona Gorge and Bunyeroo, Wiloolo, Wertaloona, Balcanoona and Moolooloo; they rested by places with names that sounded as flat as a slap, or clicked on their teeth like sticks: Yapala Range and Patawerta, Paralana and Branchina Gorge, Pichi Richi and Parachilna, Oraparinna and Angorichina; and they passed by names that sounded so harsh and dry that the names rattled around in their mouths like gibbers or karked like the cries of crows: Artimore Bore and Arkaba Hills, Kanyaka and Arkaroola.

One night they decided to camp in an old creek bed...

And then it started to rain...

Flip-Flop and the Tiger Snake

Flip-Flop was a frog. Well actually, at the beginning, Flip-Flop was a tadpole, but he soon becomes a frog. He was perky and cheeky and quick, but he was not yet very wise...

"Cranes and ibises are the most fearful monsters in the world," Flip-Flop one day declares.

Perhaps he was right but perhaps he was not. For not far away, in the leaves and bark under an old hollow log, was a danger he hadn't even seen yet... Not a tall lancing bird or a beast or a man. Not a beak or a claw or a hard sharp tooth. But something thin and smooth and as glossy as an eel. It was Tiger Snake!

Gloop had a wonderful life until the white people came. They chopped up all the bushland around his billabong:

For every day they kept on coming back
To chop and hack
The bush aside, and put their fences up;
To camp and batch,
To build and thatch,
And bring in wife and cow and horse...

It got that way, poor Gloop could not enjoy
A swaggy any more for second course.

It was okay at first - Gloop could frighten the white people away...

And yet, in spite of all the fear and fun
To catch such strangers or to see them run,
Gloop grew unhappy. Only at night
Could he keep them off with fright...

Poor Gloop. Then, just as Gloop expects to be caught and imprisoned forever in the zoo, something really unexpected happens...

I won't tell you what that something is, but I will show you a little of how Thiele describes it:

It flung Gloop out
With roar and rout
And spun him round
And up and down
Enough to drown...

With pots and socks

And sticks and stones,

And thumps and moans;

Now that's the kind of poetry that kids love...my kid anyhow. We were spellbound, all of us.

This man had an amazing way with words. This book, written for younger children just screams to be read aloud. I loved reading it, my tongue thrilling over the alliteration and the frank Australianisms. It is a true fair dinkum delight.

All of Colin Thiele's books are. You may have trouble getting hold of Thiele Tales, although my mate Abe has 12 of them for as little as $8.00 at the moment, but do fit some of this wonderful Australian's books into your children's childhood. You won't be disappointed.

I'm just going to leave you now with the wonderful scene in Storm Boy where Mike meets Fingerbone Bill for the first time. Storm Boy is truly an Australian cinematic classic as well.