There was once a muddle-headed wombat sitting in the grass and feeling very lonely.

A wombat is a square animal with thick hair like a door-mat, and stumpy legs, and no tail to speak of. He has brown eyes and a comfortable, leathery flat nose like a koala.

This wombat was lonely because he had no sisters or brothers or aunties or uncles, and besides, he had spent all his pocket money.

'I wish I had a friend,' he thought, 'a nice, comfy little friend who would fit in my cardigan pocket. A wombat could have lots of adventures with a friend like that.'

Suddenly, in the paddock nearby, he saw a wooden man waving his wooden arms and squeaking a song of his own, squeak-creak, squeak-squawk! He was a scarecrow. He wore a raggy old coat and a big straw hat, and yellow gloves on his wooden hands. Wombat was pleased to see him.

'Perhaps I could make friends with him! Yoo-hoo, Mr Scarecrow, here comes your little wombat!'

Every time the wind puffed over the gullies, the wooden man swung his arms to left and right. Wombat thought the scarecrow was waving to him. He stood up on his hind legs and pulled at the scarecrow's coat.

'Here I am! Are you pleased I'm here?

'Thump! Down came the scarecrow's wooden hand on Wombat's head. Wombat was very cross. He didn't understand that it was the wind's fault.

'That's a horribubble thing to do to a new friend,' he growled. 'You're a hidjus old pollywobble! I'm going to push you over, that's what I'm going to do!'

And he put his forehead against the post which held the scarecrow in its place.

You'll be please to know that lonely stubborn Wombat eventually does meet some friends - a fat-tailed, pouched bush mouse who has lost his spectacles called...well, called the Mouse - and Tabby, a very vain cat. 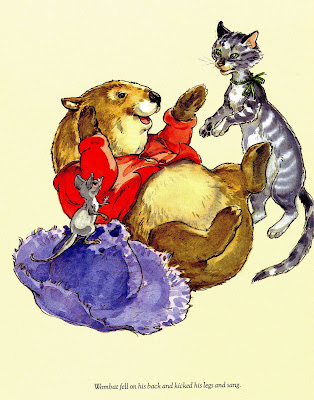 If you're looking for a book to read to your children to teach them good character traits then I probably wouldn't recommend The Muddle-headed Wombat. Ruth Park's characters are not designed to teach your kids to be better people. Wombat tries to behave, treely ruly he does, it's just that the harder he tries the more things go wrong. Wombat always ends up in trouble somehow.

Now I don't know about your kids, but that's a problem with which Jemimah can relate.

The Muddle-headed Wombat is a classic of Australian children's literature. It's the sort of book that embeds itself in your heart and stays there.

Although we finished the book several months ago, only just last week Jemimah looked at me and said wistfully, "I wish there were more muddle-headed wombat stories. I miss Wombat and Tabby and the Mouse. I wonder what they're up to now." 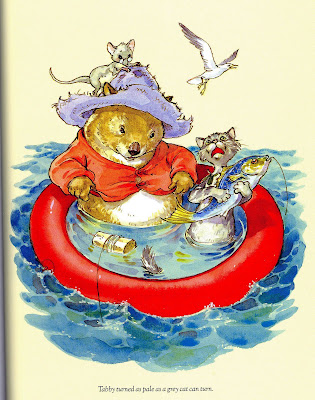 Jemimah will be delighted when I tell her that there are lots of stories for us still to discover: 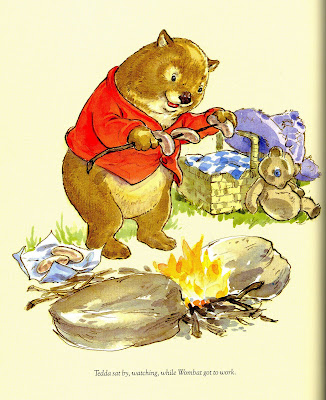 Interestingly, this passion of Jemimah's for this mildly naughty, muddled animal is what sets the series apart from other so called 'classic books'. The Muddled-headed Wombat series is written for children not adults. They capture our children's imaginations and interests, not necessarily those of their parents. I think this is what makes Ruth Park such a unique Australian children's author. She is one of the best.

We read the first four books in AO2. They're contained in a single volume by Angus and Robertson - one of the Australian Children's Classics series.

Don't miss these Australian Living Books, will you - your family and your vocabulary will be the poorer without them.

Wombat knew what it meant.

For those of you who have read the series, what's your favourite Wombat malapropism? We use treely ruly and horribubble the most. Oh and this phrase: "Shall I boil the william?"