The Story of Blinky Bill 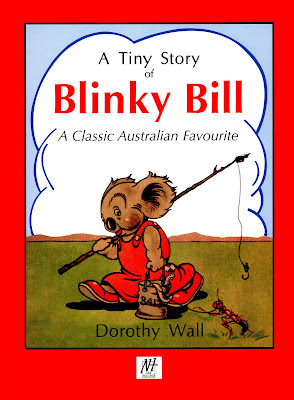 I reckon there's probably a story about the reprinting of this delightful book about Blinky Bill. It just popped up on the bookshop shelves in December - a little facsimile edition paperback amongst all the glossy Christmas offerings. It wasn't even put on display in the shop where I purchased it, but my super keen Australian literature eyes spotted it immediately. 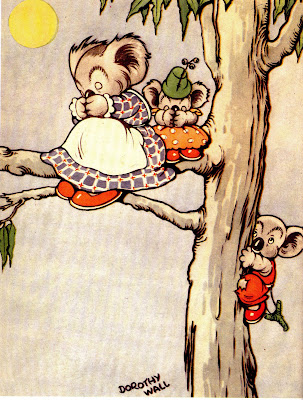 A Tiny Story of Blinky Bill is a new-to-me offering from the incomparable Mrs D. Badgery, otherwise known as Dorothy Wall about the much loved larrikin koala, Blinky Bill. Blinky is as Australian as Snugglepot and Cuddlepie or The Magic Pudding, and like these two retains its status as an Australian Children's Classic.

Children can relate to Blinky. He is dreadfully naughty, but her doesn't really mean to be. He is curious and loves to explore - ideally while Mrs Bear and Nutsy are asleep - which they are often. Blinky always gets into mischief, whether he wants to our not. Sometimes it's not even his fault! 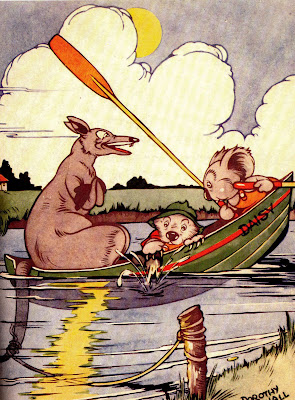 In the tiny story, Blinky has a grand idea. So exciting!

He creeps out of bed in the middle of a beautiful moonlight night, meets up with his friends, Splodge the Kangaroo and Wally the Wombat, who are gossiping at the edge of the stream that flows merrily through Farmer Brown's property, and enlists them in a plan to try a bit of midnight fishing.

"Fish!" Splodge and Wally both exclaimed with surprise. "And where do you think you'll get fish in this part of the world? Why I've never heard of such a thing!" cried Splodge with a scornful look.

"I'll get them in there, silly," Blinky snapped angrily, pointing to the stream. "Why it's full of fish! Millions of them!"

"Rubbish!" Wally exclaimed, "and anyhow you can't just catch fish by sitting on the bank and wishing for them."

"I'm going to borrow Farmer Brown's boat," Blinky replied boldly. Farmer Brown isn't using it, and it's going all rusty just lying about and doing nothing." 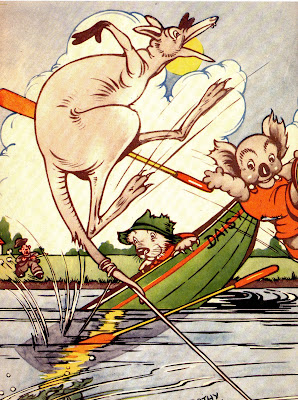 What adventures do Blinky and his friends get up to next? And what does Mrs Koala say when she finds out? Which she will, because mothers always know such things. You'll need to read the book to find out, won't you?

A Tiny Story of Blinky Bill is written in a simpler style than the other Blinky Bill offerings - I'd estimate it to have a Lexile measure of around about 800 or so. The type is large enough that it will be easily read by many emerging readers. Jemimah read it to me.

See, I told you there was a mysterious story out there about this book that I don't know.

We read the Blinky Bill omnibus in AO1. A beautiful new version of this book titled The Complete Adventures of Blinky Bill was published by Harper Collins Australia late last year to coincide with the seventieth anniversary of the first edition in 1939. The glossy new luxury hardback version contains Blinky Bill: The Quaint Little Australian (1933); Blinky Bill Grows Up (1934) and Blinky Bill and Nutsy (1937). As well as Dorothy Wall's original stories, the volume also uses the Wall's original plates, many in glorious colour. In addition it includes a fascinating biography of Dorothy Wall, and early reviews of the first edition. I am so glad I have this book. (Not that I really needed another version of a story I already have in two or three other books, but you know how it is.)

This review from The Southern Districts Advocate, Katanning 27th November 1933 and included in the new book accurately summarises the appeal of Blinky Bill for me:

Children will be entranced by Blinky Bill's experiences and adventures: his christening; his wonderful rides on Angelina Wallaby's back; his encounter with Miss Pimm in a wayside store where he has helped himself to peppermints; his adventures in Frog Hollow; the riot he caused at Bobbin Rabbit's party; and the prodigal's periodical returns to his gum-tree amid the tears and rejoicings of his mother and the caustic comments of Mrs Grunty who lives in the same tree.

Don't let your young Aussie grow up without Blinky Bill, will you?

Finally, an anouncement from our sponsor:

If any little girl or boy should be the proud owner of a koala, please remember the poor wee thing cannot eat sweets, fruit, nuts, or all the nice things you like so much. His digestive organs are very primitive and all he needs is his own food—gum-tips; but remember not every gum-leaf is good for him, only those from the York, Flooded, Manna, and White gum-trees are suitable.

These little animals need a great deal of petting and attention when in captivity, as petting is very necessary for them. They fret and grieve and finally die, if they are left alone, just as a baby would. The kindest action of all would be to leave the koala baby in his own bushland, among his own playmates, with the sun, the sky, the birds, and the gum-trees, where he will grow to manhood and live for many years—happy as he should be.