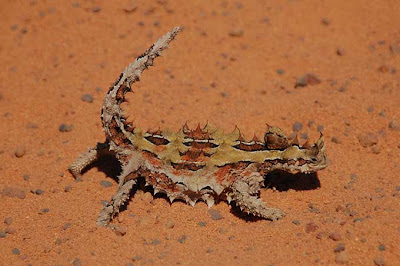 First MOLOCH, horrid King besmear'd with blood
Of human sacrifice, and parents tears,
Though for the noyse of Drums and Timbrels loud
Their childrens cries unheard, that past through fire
To his grim Idol. Him the AMMONITE
Worshipt in RABBA and her watry Plain,
In ARGOB and in BASAN, to the stream
Of utmost ARNON. Nor content with such
Audacious neighbourhood, the wisest heart
Of SOLOMON he led by fraud to build
His Temple right against the Temple of God
On that opprobrious Hill, and made his Grove
The pleasant Vally of HINNOM, TOPHET thence
And black GEHENNA call'd, the Type of Hell.

The poor old dragon's not really terrifying at all in reality - belying his fearsome appearance, this fellow feeds entirely on ants! Not any ants either - they need to be little blank ants of only two types, and one of these is only found on bush soil that has not been disturbed. 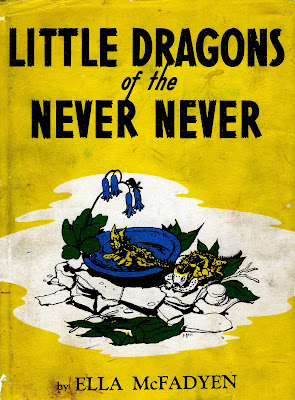 I know this because we've just finished to most absolutely wonderfully delightful little book. Called Little Dragons of the Never Never by Ella McFadyen, author of the popular Pegmen books, the book is the account of the daily lives of two little dragons sent to the author from the outback. Wendy, the girl dragon, 'was such a little creature to be so wise and to work so hard, that you would love her and wonder at her; but then she had to look after Marco, who was fascinating, but gay and thoughtless.'

The way Wendy's little life began was this. Her mother made a corroboree with very good magic, to make the rains come and the ants run and everything happen in its season, just as the black men do. But there was more in it than that. She had to make sure that out of her eggs there would hatch a daughter dragon who would be a wise as herself in all the laws of her tribe, which have come down to the dragons from the Long-ago. Boy dragons cannot learn these things, because though they are very brave and dashing and good at many things, they are best of all at forgetting. There is no room inside their little three-cornered heads for more than one idea at a time.

You should have heard the roars of laughter issuing from our car as I read that passage to my family on our way home from Church one Sunday. "Humph," muttered husband, he who is good at many things but best of all at forgetting, "I suppose that will need to go on the blog, won't it?" And he was right, because here it is.

I include this excerpt to give you a look at a number of components of the book aside from that gorgeous character study of men and women: the delightfully whimsical and gentle writing style; the subtle humour; the way the creatures each display their personality; but also to display the intertwining of fact and fiction. The book is written as an account of the day-to-day activities of the delightful little dragons, but much of their behaviour is interpreted as if through an Aboriginal myth. Their story has an imagined Dreamtime component invented and assumed. Having studied much Aboriginal legend and fable during recent years, this feature of the story added, rather than detracted, from the book for us, but I know it will deter some of you from wanting to read this book to your kids, and so do be aware. 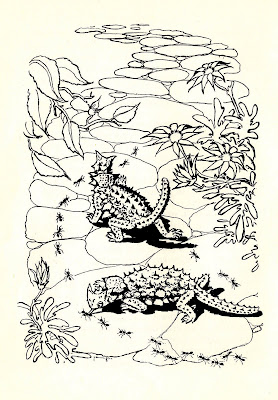 McFadyen does not anthropomorphise Wendy and Marco. They behave and look like animals. They don't speak either. Instead, she interprets the dragons' hand movements for us, as if they were using sign language to communicate both with each other and with humans. Their thoughts are interpreted through their actions. The result, although entirely imagined, is an entirely credible dialogue that we can understand.

As a result, we learn a huge amount about horned dragons. Ideally designed for their harsh dessert home by our great creator, the scales on the dragons' belly and legs collect morning dew and water from damp sand, which travels by capillary action up to their mouths. The water must be warmed and presented in the right colour bowl for the dragons to bathe in. It must be rain water. The dragons even awake from their winter hibernation to bathe if they hear rain. All this we learn. 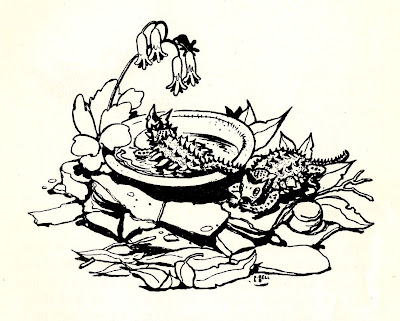 Then one day Wendy met Marco Polo. These were not their Never Never names, for in those days on Arltunga Downs they had bush names chosen by their tribe. Wendy wore her rock-brown dress with the diamond-shaped colour-patches down the back, sometimes green like lichen on a stone and sometimes dusty purple like ironstone gravel. Marco was got up fir to kill in a fine new suit of red and yellow, patterned like a harlequin's. he was careering happily about with his tail curled up over his back. as soon as he saw Wendy he simply adored her and began to tell her about his wonderful travels, the cave he had just found (he was always finding caves, as it turned out, and they were nearly always the same cave over again) and the terrific journey he was about to begin.

Wendy listened to it all and she thought: "No doubt he is very brave, certainly he is very beautiful, and if he says so I suppose he must be clever. But he has no memory, of course, and he hasn't a scrap of commonsense, so he will need me all his life to look after him."

Before he had finished showing his new playmate half the wonders he had discovered he said to her: "Promise me that you will never leave me."

And Wendy answered: "Wherever you go I shall always go with you."

"Now I am sure of that I can get on with my work of being a great explorer," he said. "Perhaps you will do something great too."

But nobody, neither little Marco not little Wendy, not any of their tribe - not even the man with the box under his arm, who was searching among sand and stones - know that little Wendy would one day tell the story of her tribe to someone in far-away Sydney, so that it could be written down for all who read to learn to love the dragon people. 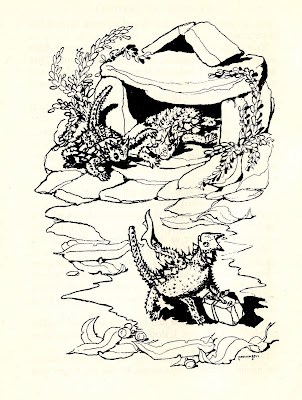 In that aim she succeeded for us. You cannot help falling in love with the delightful little lizards described so beautifully in Little Dragons of the Never Never. We adored this book. Can you tell?

We read it as our Natural History text in AO3. A few copies are available from Abe. I hope you enjoy it as much as we did. Regardless, you will learn heaps about horned dragons, and read a delightful story as you do so. 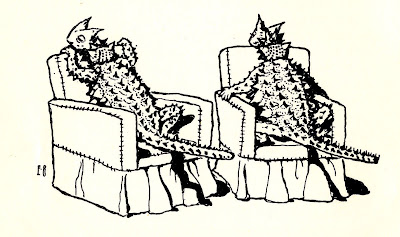