The bias of history 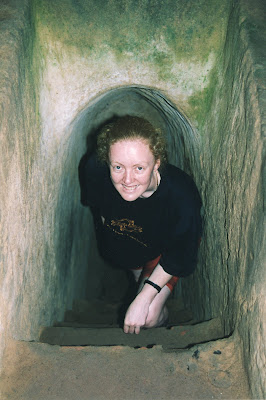 Me back in 1992 in part of the immense network of underground tunnels of Củ Chi - the Viet Cong's base of operations for the Tết Offensive in 1968.

Signs of what we call The Vietnam War and they somewhat revealingly refer to as The American War were everywhere. People badly deformed by the dioxin-laden herbicide, Agent Orange, or the burns of napalm were embarrassingly visible in the streets. The ground remained scared with unexploded ordinance, and the towns revealed the horrific injuries left by the land mines, bombs, grenades and mortar shells that still littered their jungle homes. These were the days before Coca Cola and McDonalds. There was no American Embassy, and no American tourists.

In Ho Chi Minh City - Saigon - we visited The American War Crimes Museum containing, primarily, exhibits displaying atrocities committed by Allied forces in the name of war. On the wall in huge red letters was a sign that began something like this:

We, the Vietnamese people, accuse you, the American, Australian, Canadian and New Zealand people (and maybe others) of ...

I can't remember what this sign accused me of, but I do know that it struck me with the horrible realisation that maybe what we - Australia - had done might not have been completely honourable. I can still remember how horrified I felt as I walked around the displays. Face-to-face with the vestiges of a war that I had grown up through but really knew nothing about, I was speechless. The photographs were gut-wrenching. Even today I remember the photograph of American soldiers smiling as they hold up the severed heads of Vietnamese guerrilla fighters to the camera. Another one showed a helicopter full of people being pushed into the water of the Vietnam Sea to allow an incoming empty helicopter space to land.

"Not for inciting hatred, but for learning lessons from history."

You can see many of the photos from this museum, now renamed the far more politically correct sounding War Remnants Museum online here, but I shall move on. The purpose of this post is not to debate whether we should have gone to fight in the Vietnam War. It does not question the bravery of those who did chose the answer that call either. I tell this story merely to recount to you the first instance in my relatively sheltered life that I realised that I might not have been given the whole story, that perhaps my version of history wasn't exactly right, and perhaps even that maybe - just maybe - we might have been wrong.

Mostly the history we know is the story of the victors. We have long had the European version of the conquest of Australia, but the Aboriginal version has only emerged in the past few decades.

Except when we're not.

I have been confronted with this bias of history on a number of occasions recently as I teach Jemimah. Despite our obviously deliberate leanings toward the Protestant version of events leading up the the Reformation, we are currently reading about the imprisonment of the Catholic Mary, Queen of Scots at Sheffield Manor Lodge in the 1500s through the pages of Charlotte Yonge's Unknown to History ("I like Queen Mary, Mummy. I wish she were on our side."). At the same time we are learning of the English Civil War through the Royalist eyes of the Beverley children in Captain Frederick Marryat's The Children of the New Forest. ("I wish we were Catholic," sighed Jemimah during her narration yesterday.)

On April 30, 1975, People's Army of Vietnam forces marched into Saigon. A tank crashed through the gates of the Presidential Palace, the President, General Duong Vanh Minh surrendered and the remaining U.S. personnel were hastily evacuated from the roof of the U.S. embassy. The war was over.

I think Jemimah will believe that Vietnam did. I think she'll believe that because she'll look at my pictures and listen to my stories. She will come to believe as I do. Maybe. At least she will know both sides of the argument. She will be armed with the information she needs to make an informed decision.

That's why yesterday we read about the Roundheads being the enemies, the baddies. Sometimes the Puritans were wrong. Sometimes they did terrible things to the Royalists in the name of God. It is good to read about these things, to talk them through. What is important for me, though, is that predominantly Jemimah be taught the version of events that her father and I believe to be true.

Which is where careful selection of schoolbooks comes to the fore. We are using Henrietta Marshall's Our Island Story for English history. It is an excellent book for the most part, written from a Protestant point of view. It is not, however written from a Reformed viewpoint but an Anglican one. Marshall's opinions on the events of the Reformation and mine diverge significantly on many points. It would not be good for me to use this book alone to teach the history of the Reformation. It is the same with science. I can teach much of scientific theory and practice using a secular science text. When it comes to creation, though, I'll need more.

So now I'm going back to where I began. History can lie. Books are written by people, and people are biased. Taking into account both sides of history - a 'post-revisionist' view of history - is more balanced, but it is not necessarily better. It just gives two points of view.

The key is to know what you are reading. Know the author's slant. Is his interpretation of the world the same as yours? Do you have the same world view? If not, can you use his book as part of a balanced approach, or should you look elsewhere?

In selecting an author's work you are perpetuating his view of history. You are making it a reality. Is this the Biblically oriented reality you want your children to know?

The God who made the world and everything in it is the Lord of heaven and earth and does not live in temples built by hands. And he is not served by human hands, as if he needed anything, because he himself gives all men life and breath and everything else. From one man he made every nation of men, that they should inhabit the whole earth; and he determined the times set for them and the exact places where they should live. Acts 17: 24-26