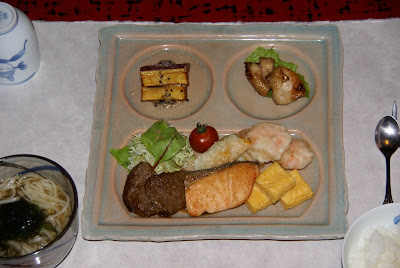 I wonder how your kids would enjoy this meal. There are lots of interesting things for them to try here - grilled eggplant, teriyaki chicken pieces, tempura prawns and vegies, grilled salmon, miso soup with noodles, egg omelette, grilled steak, salad and steamed rice. Oishii!

It is, believe it or not, the kids' meal at our Kyoto ryokan. Sometime soon I'll show you what the adults were eating at the same time - ten or so courses of the most amazing foods you'll possibly ever read about - but not today. Today I want to talk about kids and food.

Firstly, some amazing news. Your children do not know the cultural heritage of their favourite foods. They also do not regard them as foreign. Some of them may even be regarded as 'comfort foods'.

Gyoza are like that in Jemimah's mind. These delicious morsels called variously pot-sticker dumplings, jiaozi, gaau or momos, are simply minced pork and vegetables wrapped in a thin dough covering with crimped edges. To Jemimah they signify home and familiarity.

In Japan they're called gyoza. The grilled ones, Jemimah's favourite type, are known as yaki gyoza. Only in our peaceful home we call them yumi gyoza. Because they're yummy, not yucky.

They're pretty easy to make. I keep gyoza wrappers in the freezer and just pull them out when I need them. More often though I use frozen packet ones. Frozen dumplings from an Asian store are one of the few convenience foods we keep in our home, and they're as yummy as the ones you get in restaurants most of the time. Perhaps the restaurants use the frozen type too. I'll wager that some of them do, in fact.

Sometimes in Japan when Jemimah had had her fill of new and exciting culinary experiences - of grilled salmon, nagaimo and nattō for breakfast and sea snails for lunch, we would head out for a meal of gyoza. After a couple of platesful of these delicious morsels she would be happy to be brave once more. 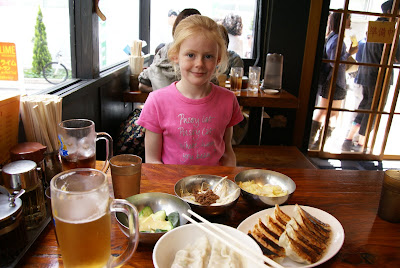 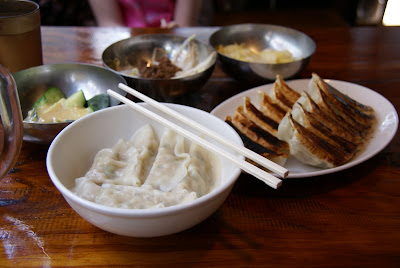 What sort of foods do you eat in your home? Is your diet similar to that of your parents? Is your children's diet similar to yours? It's a funny thing you know, but kids in India and Thailand grow up eating spicy curries; kids in Bhutan eat chilli and cheese; kids in Japan eat nagaimo and nattō and kids in China eat sea cucumber. Scottish kids eat deep-fried Mars Bars; English kids eat pickled onions and mushy peas; Aussie kids eat Vegemite; and I'm told that some kids in America even eat peanut butter and jelly sandwiches. Ewww! The amazing thing is that if you introduce your kids to these foods early enough, they'll eat them too. They might come to love them even!

The secret is to start young. It is much harder to change a child's food habits later when they're already used to peanut butter and jelly. Ugh. Harder, but not impossible though. Never assume that your kids won't like a food just because it is foreign. Remember, they won't even know that it is foreign unless you tell them. It constantly amazes me to see the foods Jemimah falls in love with. We spent hours in Japan trudging the streets one day for a packet of nori seaweed because she had an unsatisfied urge for a packet of sheets of plain green seaweed. Weird but true. Not that it is hard to purchase nori in Japan mind you, but we wanted enough for one kid for a week, not for a family for a month. Packets of nori in Japan are pretty huge we discovered.

Some kids are naturally fussy. No matter what you introduce them to, they aren't going to ever be terribly adventurous eaters. The greater variety you offer them, the more likely it is that they'll discover something they like to eat though. It is worth persevering.

The rule in our home is that you don't have to like a new food but you do have to at least try it. Just because you don't like it served one way doesn't mean you don't like it served another way, either. Sometimes you even need to taste something a few times before you come to like its flavour. Olives were like this for me. I ate an awful lot of olives before I came to enjoy them. Nowadays I love them. We all do. It took Jemimah a long time to eat sushi, but you can't keep her away from it now. Maybe it's the nori!!

The world is getting smaller. Few of my grandparents' generation travelled; most of Jemimah's will. They, like me, want to see the world, and when they do, they'll enjoy the experience all the more if they're willing to experiment with the food, if they're just willing to give it a go. 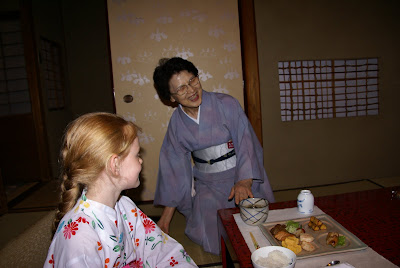 One night in Japan we were tired. We'd been walking all day and we needed to eat. We were in a land full of the most sublime food. We could have had ramen or tempura or sushi or tonkatsu or udon or unagi or okonomiyaki.

We could have had yumi gyoza.

But we didn't. We had McDonalds.

Sometimes even a kid as adventurous as Jemimah needs fries. 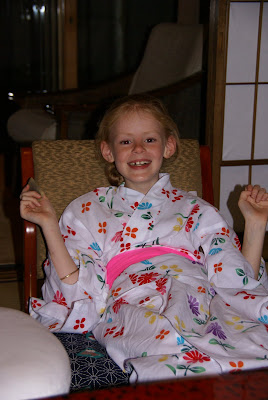