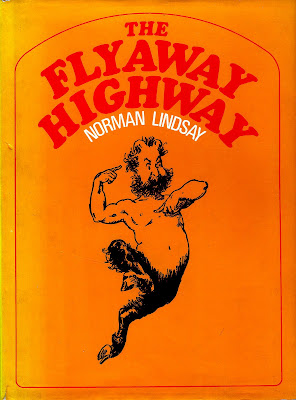 J K Rowling is writing a new book. Some say that it's another Harry Potter book, and her millions of fans are pretty excited about that, it seems. Personally, having never read one of her novels, although I did go to see the first film a gazillion years ago, I neither know nor care very much. What I do know, however, is that the book, whatever it is, will be a huge success. Fans will be pre-purchasing it before it even gets to the shelves. Maybe they even are already.

Which is why there is something that has me pondering.

It has to do with Norman Lindsay.

Lindsay's children's book, The Magic Pudding is arguably Australia's best children's book. It is the only Aussie book to feature in the sublime New York Review Children's Collection of time honoured children's classics.(How I love this collection.) It is featured in Jane Gleeson-White's book, Australian Classics, one of only three children's books, along with Storm Boy and Seven Little Australians, to do so. It is featured in almost every list of great books for children. His much-loved book won instant popularity when it was published in back in 1918 and it is quite rightly considered an Australian classic today.

It is worthy of the acclaim. Lindsay's crazy madcap story of Albert the cut-an'-come-again Puddin' - a pudding that loves being eaten and can be whatever you want him to be - steak-and-kidney pudding now, boiled jam roll and apple dumpling for afters - is as crazily logical as Alice in Wonderland with just as many illogical twists and turns. It combines the Australian vernacular voice with wonderful poetry and Lindsay's delightful illustrations to create a whimsical story full of amazing characters - a sailor called Bill Barnacle, a penguin called Sam Sawnoff, and a koala named Bunyip Bluegum - united as the Noble Society of Pudding Owners - against the professional puddin' thieves, a possum and a wombat.

I read it aloud to Jemimah in AO2, and had not just her but the whole family enthralled. It is wonderful language to read aloud too:

"You'll enjoy this Puddin'," said Bill, handing him a large slice. "This is a very rare Puddin'."

"It's a Christmas steak and apple-dumpling Puddin'," said Bill.

"It's a —. Shall I tell him?" he asked, looking at Bill. Bill nodded, and the Penguin leaned across to Bunyip Bluegum and said in a low voice, "It's a Magic Puddin'."

"No whispering," shouted the Puddin' angrily. "Speak up. Don't strain a Puddin's ears at the meal table."

"No harm intended, Albert," said Sam, "I was merely remarking how well the crops are looking. Call him Albert when addressing him," he added to Bunyip Bluegum. "It soothes him."

"I am delighted to make your acquaintance, Albert," said Bunyip.

"No soft soap from total strangers," said the Puddin', rudely.

"Don't take no notice of him, mate," said Bill, "That's only his rough and ready way. What this Puddin' requires is politeness and constant eatin'."

They had a delightful meal, eating as much as possible, for whenever they stopped eating the Puddin' sang out

"Eat away, chew away, munch and bolt and guzzle,
Never leave the table till you're full up to the muzzle."

But at length they had to stop, in spite of these encouraging remarks, and as they refused to eat any more, the Puddin' got out of his basin, remarking—"If you won't eat any more here's giving you a run for the sake of exercise," and he set off so swiftly on a pair of extremely thin legs that Bill had to run like an antelope to catch him up. "My word," said Bill, when the Puddin' was brought back. "You have to be as smart as paint to keep this Puddin' in order. He's that artful, lawyers couldn't manage him. Put your hat on, Albert, like a little gentleman," he added, placing the basin on his head. He took the Puddin's hand, Sam took the other, and they all set off along the road. A peculiar thing about the Puddin' was that, though they had all had a great many slices off him, there was no sign of the place whence the slices had been cut.

"That's where the Magic comes in," explained Bill. "The more you eats the more you gets. Cut-an'-come-again is his name, an' cut, an' come again, is his nature. Me an' Sam has been eatin' away at this Puddin' for years, and there's not a mark on him.

The Magic Pudding is not perfect - we found the courtroom scene somewhat protracted and wordy, for example - but it's a pretty good book. It's a must read piece of Australian literature, that's for sure.

My pondering does not have to do with the worthiness of The Magic Pudding. No, what I'm wondering about is the apparent unworthiness of Norman Lindsay's only other book for children, The Flyaway Highway. And what has me wondering is why this other book of Lindsay's is almost totally ignored. 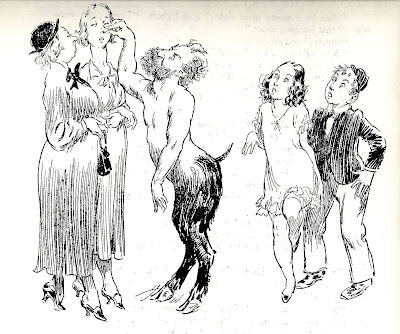 We read it in AO3. It's the story of Egbert Tomkins and Murial Jane, who together with 'a bloke with cow's hooves' named Silvander Dan take a journey along the highway of children's literature and have lots of wildly absurd adventures along the way. They save an eloping couple in the notorious Pig and Whistle Post-chaise Affair - a runaway love-affair where the protagonists are 'pursued by enraged old fathers, with a general bust up of post-chaises at the bridge here'.

"By jings, that will be worth seeing," said Egbert exultantly. 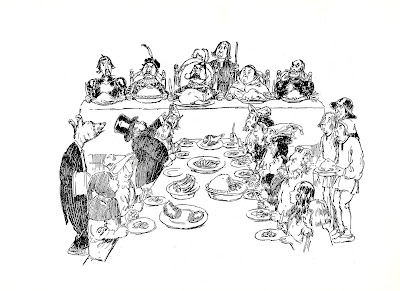 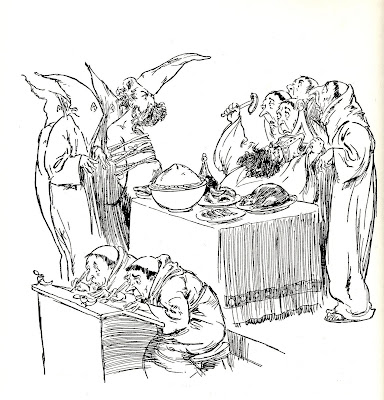 The Flyaway Highway is probably not as good as The Magic Pudding. Lacking an Australian focus with our unique wildlife and the fantastic colloquial speech of the Ocker character means that The Flyaway Highway is missing that certain element that makes The Magic Pudding a true Australian classic, but it is still a pretty fun book. Its pages are still full of Norman Lindsay's incomparable writing and wonderful illustrations. It is as absurdly drôle as "The Puddin' book", and every bit as crazy as Alice (which we read at the same time). It is worthy of recognition, and it is certainly worthy of a reprint.

Search out a copy from Abe and give The Flyaway Highway a go. I think you, like me, will be left wondering why this book is almost totally ignored. 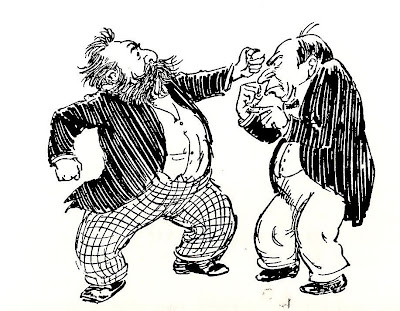