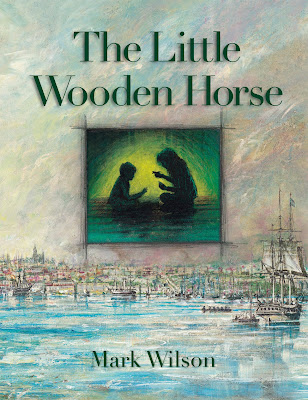 Jemimah and I read Mark Wilson's The Little Wooden Horse today as a gentle introduction to our Australianised AO4 Term 3 history period, 'The Arrival of the First Fleet and the British Settlement of Australia'. It was a terrific story.

I think we were all taught that there were convicts on the First Fleet who were sent to Australia for stealing a single loaf of bread to feed their starving families. What is less well known is that some of these unfortunate people were children. Most of them died during the months long sea crossing, or of consumption upon their arrival, but even for those who survived, life in the new colony was pretty grim.

This book tells the story of two orphan children, Elizabeth and Tom who survive only because of their courage and strength and the friendship they have for each other. It is a fascinating story, and was an accurate introduction to the historical period we were aiming to cover.

I am becoming increasingly impressed with Mark Wilson's recent books for children. I have blogged already here about two of these - the first two books of his Children in War Trilogy, My Mother's Eyes, and Angel of Kokoda. Both are excellent additions to an ANZAC library. His collaboration with Gary Crew on the I Saw Nothing series about extinct Australian animals also produced three terrific books. I blogged on I Saw Nothing - The Extinction of the Thylacine here.

His most recent series is titled Ben and Gracie's Art Adventure. The first of these, about the artwork of Frederick McCubbin, was published in April of this year. Tom Roberts is coming soon! You can read more about this series here. I'll definitely be on the lookout for these. They look great.

If they're anywhere near as good as The Little Wooden Horse, I'll be well pleased.