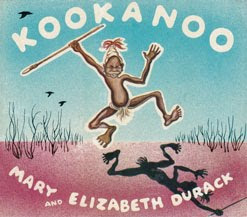 I wish I had been clever enough to post about this book last week, because the last week of September is Banned Books Week, and Kookanoo managed to get itself banned by Howard County back in 1979 for 'demeaning the self-image of black children'. Which is frankly ludicrous, but happened anyhow. So if I had blogged about it last week I would have been timely and topical and you would have all been impressed by my cleverness. Alas, I was neither timely nor clever, so there you go.

Kookanoo is a delightful picture book written by Mary Durack and illustrated by her sister, Elizabeth. It's about Kookanoo - a little Aboriginal boy living in 'The Red Heart' of Australia.

He had a mum and dad and just about dozens
Of uncles, aunts, and cousins,
And like other boys
He also had toys.
These were boomerangs and spears
(Smaller of course than the grown-ups use)
Which he threw around,
Pretending - with loud whoops and cheers -
To kill kangaroos
And bring birds down flop! to the ground.

Kookanoo is a bit too big for his boots. Fetching water and wood for the family wasn't any fun, and taking his mum's coolamon to collect nardoo in was women's work. Nothing that the grown-ups suggested interested Kookanoo until his dad had a really bright idea...

"I'll tell you what, m'lad,"
Said his dad.
(That fine, big fellow in the picture, see!
"How'd it be for something to do
If you came with me
After kangaroo?" 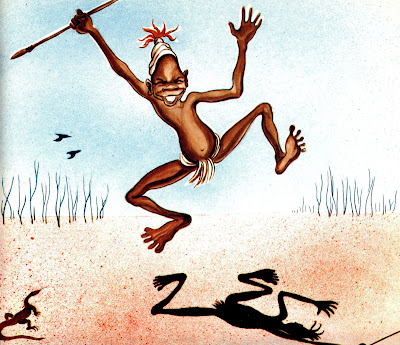 Now, that was more like it! Kookanoo had always wanted to go hunting with his dad.

Until his dad said,

"You are very clever, my fine young Kookanoo,
Stepping like an emu,
Running like a dingo,
And much too important to pick up nardoo,
Let us see now - just let us see,
If you are as smart as you seem to be.
You think you can do it;
Well, I'll take it easy here
And

Leave you to it!" 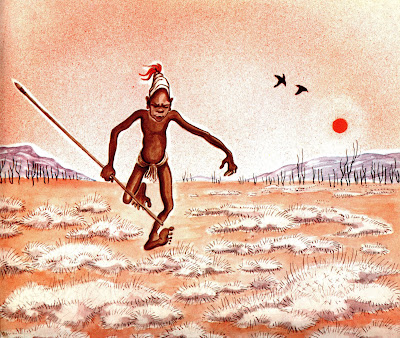 But now comes the interesting part of the story, for somebody, or rather, something, was listening to Kookanoo and his dad, and this something was wise old, cunning old, old man Kangaroo. 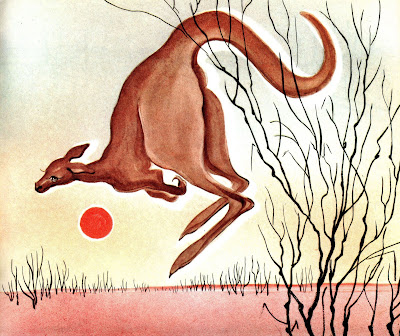 And old man Kangaroo had a plan to bring young Kookanoo down a few pegs...

Mary and Elizabeth Durack's works are a little bit out of fashion nowadays with their somewhat stereotypical view of indigenous Australians, but the sisters were always sensitive to the feelings of their Aboriginal friends, and I think their books are delightful. Jemimah agrees.

We read Kookanoo is AO4, but mainly because I am trying to space out these delightful books through the Primary School years. It would be enjoyed by far younger children as well. You can read my review of The Way of the Whirlwind here. The Magic Trumpet is coming soon.
Posted by Jeanne at 3.10.11