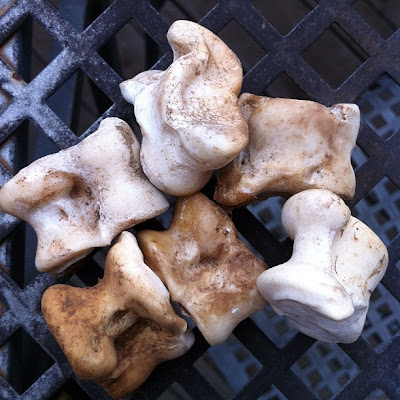 Jemimah and I popped into our local butcher last week with a strange order. As well as some of his marvellous osso bucco, I was after a set of sheep knuckebones.

Seems nobody else had ever made such a strange request before, but my butcher is...of a certain age...and he became quite nostalgic as he remembered his sisters sitting outside playing Knuckles in their youth. Apparently they dyed their bones by boiling them with ink and other dyes like you do Easter eggs, so that was a useful tip.

At any rate, Mr Butcher told me that the knucklebones from fresh meat were not much good because they took so long to dry, and he kindly volunteered to take a walk around the paddocks and collect a set of similar sized bones for me. Dry, and ready to play.

When we arrived home from Geelong on Sunday night, there they were on the outside table by the back door - six nicely shaped sheep knucklebones. (One is a spare, I guess!)

Real knucklebones are much bigger than the plastic ones that were available in the 60s, which was when I played with them in the schoolyard. They're much harder to play with too, since holding three or four of them comfortably in your hand whilst tossing the fifth bone, known as the taw, is hard enough for me, and almost impossible for Jemimah. Of course, that also makes them a challenge! My grandmother, living on a farm, had a set much like the ones I've just obtained for Jemimah, and I had quite a reputation as a child as a crack knucklebone player because I trained with the much more difficult bigger set and then played and competed with the smaller plastic set.

The correct rules for Knuckles are whatever rules you played as a child. My rules have such names as 'dumps', 'horse in the stable', 'through the arch', 'juggles', 'sweeps', 'thread the needle', 'catching flies', and 'pussy cat'. You'll find the rules to most of these variations here. Right now Jemimah and I are working on 'plains', with me demonstrating my superior skill while I am still able. No doubt she will soon overtake me.

As well as Knuckles, we played marbles, elastics, four-square, rounders, and a quaintly original ball game called gutter-ball at my primary school. Do you have nice memories of any of these? What traditional games did you play as a child? Do tell. Are you passing them onto the next generation?
Posted by Jeanne at 19.4.12