In books lies the soul of the whole past time, the articulate audible voice of the past, when the body and material substance of it has altogether vanished like a dream.

A few of you were not too impressed at my thoughts on The Australia Book. I'm sorry about that, because, as I stressed in that post, I actually think it's a pretty good book. I just don't think it is a Living Book as defined by Charlotte Mason for the reasons I mentioned, and as such it has no part in my daughter's fairly strictly CM education. There are many parts of our school day that would not make the CM puritans happy, mind you, but I do keep very stringently to the criteria pertaining to books. You may be different. You may not be schooling according to CM's principles, or may only adhere to them rather loosely. That's your privilege - I certainly am not going to tell you how to raise and educate your children. I can only tell you what I do what I do and why. The rest is up to you.

So on to Australian History Spines. Here are my thoughts on some books. In case you're still interested. Don't forget I'm looking at these from the point-of-view of a self confessed Charlotte Mason purist. Just because I mightn't like them as CM living book history spines doesn't mean that you can't or won't. Sometimes I used books that CM wouldn't like much too, despite my exacting standards.

The Australia Book by Eve Pownall 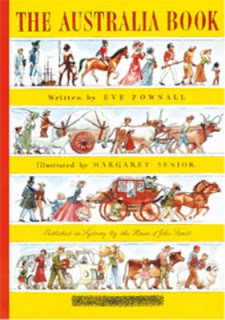 An okay book for the younger years as a sort of skim through the main events of history type book, this book is really an illustrated timeline - headlines with very little substance. Beautifully illustrated but not a Living Book.

See my review of this one here. 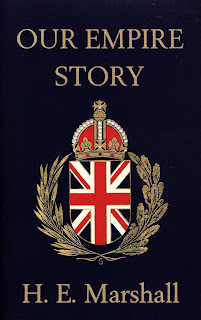 This book is OOP but is available as part of the larger Our Empire Story reprinted by Yesterday's Classics, which includes the stories of Canada, India and South Africa as well as those of Australia and New Zealand. I love Marshall's writing style, which will be familiar also to Ambleside Onliners who have used her British History, Our Island Story.

The major limitation to this book is that it covers such a small amount of Australia's history, discussing in 9 chapters the discovery of Australia through to Federation. Some of the stories, such as the one of James Murrell's 17 year exile amongst the Queensland Aborigines, were new to me, but very interesting. Marshall's Victorian attitudes towards native peoples will need judicious editing.

Our Sunburt Country - An Illustrated History of Australia by Arthur Baillie 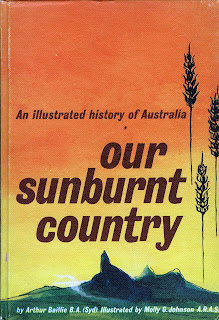 Our Sunburnt Country was recently republished by Homeschooling Downunder, and updated by the author to correct some outdated ideas and to bring the book up to 2008. It is a very good choice for Australian history in the primary school years, with an attractive personal writing style, literary language and pleasant line illustrations. Baillie's intention was to bring the characters from history alive, and I think he has succeeded in this aim very well.

My copy is the OOP 1964 version, but both it and the updated book contain 15 chapters. If you purchase the older version please be remember that Baillie himself was aware that attitudes had changed since the 60s when this book was first published, and make alterations accordingly. I should imagine this will not be a problem with the 2008 edition. 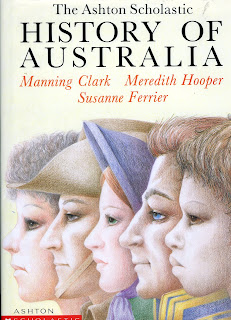 My pick of the bunch, this is my recommendation for a spine for AO4 and 5. I love the language of this book, which is rewritten by Meredith Hooper from Manning Clark's six volume History of Australia. Clark has his biases - as do all historians - but the partisan point of view to me is more than compensated for by the way the story of Australia comes alive in his hands. I always enjoy his books. The extensive use of primary sources allow us to really hear the voices of the characters of the pages of history. Quotes from diaries and letters feature prominently.

The history of Australia is longer than the other books here with 24 chapters covering prehistory to the history of today. The first chapter assumes an old world point of view. If you, as we do, ascribe to to a young earth position you could either skip this chapter or preferably use it as the jumping point for a discussion on how your beliefs differ from those of many in Australia today, including many Christians. 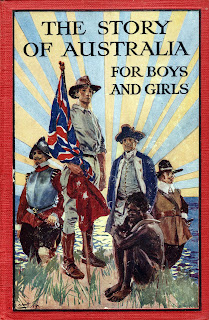 This was my favourite book until I found Clark and Hooper's book above.

Published in 1920, The Story of Australia for Boys and Girls is wonderful - as far as it goes. I love the very Edwardian style and blatant nationalistic pride that pervades every page of this lovely book.

Fifteen chapters cover the period from European exploration to the Great War, with an additional three chapters covering Australian flora, fauna and drought. Politically incorrect speech is rife, but I just love holding this beautiful old book in my hands and reading from its pages. I am a book tragic, I know. If you can relate then you'll probably love this book as well.

Obviously OOP, copies are occasionally available from my mate Abe, but not at the moment. Keep an eye out.

Australia from the Beginning by Eve Pownall 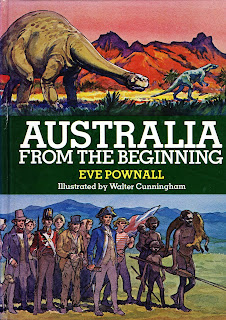 This is Eve Pownall's opportunity to redeem herself, and she does so very well. In addition the book is illustrated by Walter Cunningham, one of my very favourite illustrators.

Australia from the Beginning is a lovely book, each page of print being dotted with Cunningham's delightful line drawings. The book is well researched, and is written in Eve's typically engaging and interesting style. Aborigines are mentioned often and with respect.

The book covers the period from prehistory and the dinosaurs, thylacines, diprotodons and other megafauna from an old Earth perspective, and dates the arrival of the Aborigines at 30,000 years ago or earlier. The final chapters include the Tent Embassy in 1972. There are 26 chapters.

Again, this title is OOP. Abe has one copy here. 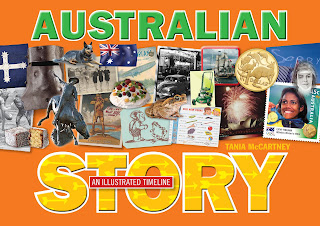 This brand new book, published April 1st 2012 is an illustrated timeline of history. It is not a living book, but I have mentioned it because it is new and politically correct, and actually very interesting to have a browse through.

The book starts with the Big Bang 47 billion years ago, and includes all sorts of must know information like when the Beatles toured Australia and when Vegemite was introduced and when Aborigines were given the right to vote and when the Mabo judgement was passed and when Harold Holt went for his last swim. I haven't seen it, but I'd like to. You can purchase it from the National Library of Australia bookshop.

PS Does anyone else find left formatting of pictures almost impossible with Blogger?