Gold! In Australia in the 1850s, the whole country was aflame with gold fever. People were finding huge nuggets, fortunes were being won, and everybody wanted to be a part. It's a great period of Australian history to share with kids. 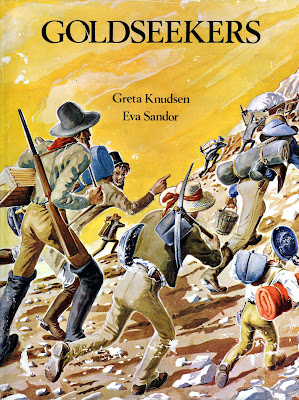 It was its similarity to the Holling Clancy Holling books that first attracted me to Goldseekers - full colour pictures on one side of each double spread, with small black and white line drawings surrounding the text on the other. Despite the fact that there is no acknowledgement of this, I can't imagine that this is a coincidence.

Fortunately, Greta Knudsen's writing is pretty good also, and her research is meticulous. 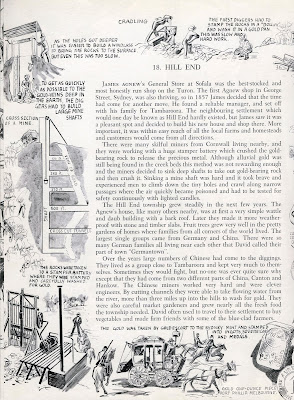 Goldseekers is the story of a fictitious family, the Agnews, who emigrated from England to New South Wales just before Edward Hargreaves discovered gold near Bathurst. Through Knudsen's painstaking research we learn about the goldrush through the eyes of their son, David, as he grows from a young child to being a father himself. The family encounter Aborigines, get lost in the bush, are held up by bushrangers, and trek across the Blue Mountains, meeting many real characters of the Australian gold rush era on their way. 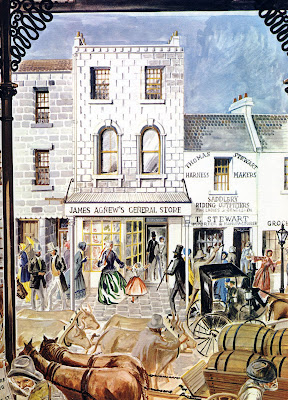 Through the pages of the book we learn about the gold rush in Turon, Tambaroora, Sofala and Hill End, and read of real incidents like the Lambing Flat affair where the Chinese were savagely attacked. The story is vividly arranged, and the style is appealing, with historical information presented in a way that makes it read like an integral part of the story and not just an opportunity to ram boring historical facts into small minds:

The most important person in the township was the Government Gold commissioner, who made sure that every digger had his licence. The fees collected from the diggers were used to pay the troopers to keep law and order, and provide a mounted escort to take the gold to Sydney. The number of Government officials grew with the population, but even the postmaster and his clerk kept their gold pans close by and would join the diggers when their official duties were over.

A licence cost £25 each year and many of the diggers found that they could not afford to pay for their right to dig, The Gold Commissioner knew this and would patrol his area carefully every day, searching among the diggers for those who were trying to evade the law. When he appeared with his escort of gold police, someone would croak like a crow, warning those who didn't have a licence to hide for a while. All the other diggers would help to hide the equipment until the coast was clear again. 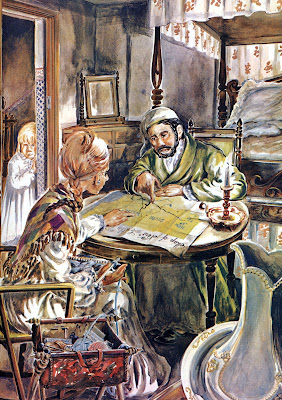 Jemimah is reading through two chapters of Goldseekers each week of AO5 Term 2. She's enjoying it, and I am enjoying her thorough narrations - the sign of a true living book. We're both enjoying those pictures by Eva Sandor. Her attention to detail make each of the illustrations a valuable source of information in their own right, and we have spent much time discussing each one and doing further research. 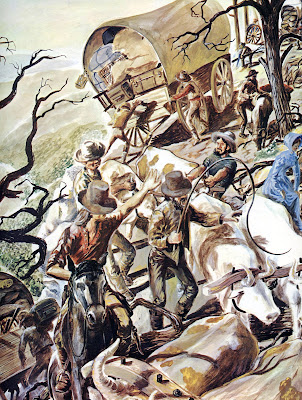 Unsurprisingly, Goldseekers, first published in 1969, is out of print. You can buy copies at a reasonable price at my friend Abe. 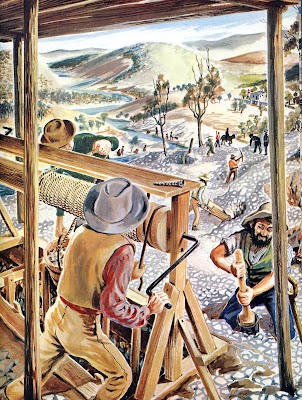 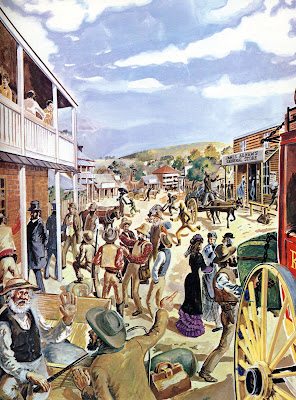