Then, as for the 'living creatures,' here is a field of unbounded interest and delight. The domesticated animals are soon taken into kindly fellowship by the little people. Perhaps they live too far from the 'real country' for squirrels and wild rabbits to be more to them than a dream of possible delights. But surely there is a pond within reach - by road or rail - where tadpoles may be caught, and carried home in a bottle, fed, and watched through all their changes - fins disappearing, tails getting shorter and shorter, until at last there is no tail at all, and a pretty pert little frog looks you in the face. 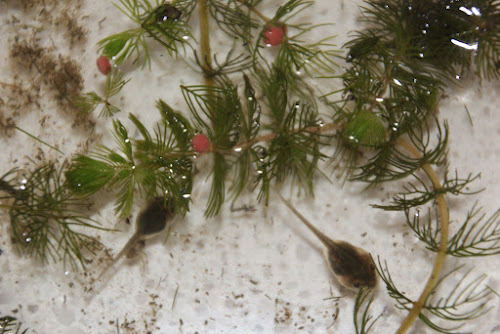 When I was a child my grandmother's home was a cottage in the country. During our wonderful weekend stays we mastered two wheeler bicycles, learned to ride horses, milk cows, drive old cars and acquire all sorts of skills that prevent me being a total embarrassment of a city girl today. It was a wonderful life, and I have very fond memories of my holidays in the country. Across the road from my grandmother's and down just a couple of paddocks was a dam that was teeming with frogs, and most years in summer we would collect some frogspawn and grow frogs. It was such fun.

Sadly, that same frogspawn is now quite difficult to procure. Part of the problem is declining frog numbers all over the country, but the other problem is knowing where to find the eggs in the first place. I had reluctantly come to the conclusion that maybe I would never be able to introduce Jemimah to the delights of tadpole rearing at all.

Lo and behold, on Tuesday at bookclub, one of the ladies arrived with a big jar of lovely wriggly tadpoles especially for Jemimah. Apparently she had been chatting to my unsocialised-and-unable-to-speak-to-anybody-but-her-own-peer-group daughter unbenownst to me, and between the two of them had organised for this to happen. How exciting! 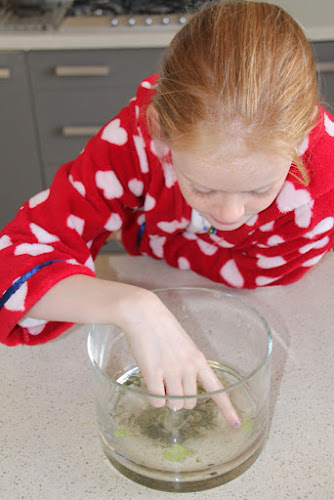 Children should be encouraged to watch, patiently and quietly, until they learn something of the habits and history of bee, ant, wasp, spider, hairy caterpillar, dragon-fly, and whatever of larger growth comes in their way. 'The creatures never have any habits while I am looking!' a little girl in some story-book is made to complain; but that was her fault; the bright keen eyes with which children are blest were made to see, and see into, the doings of creatures too small for the unaided observation of older people.

The watching of tadpoles is indeed a lesson in patience, but getting your tadpoles in winter as we have reduces the waiting time immensely! It is generally the beginning of autumn in Australia that tadpoles begin growing legs, shrinking tails and becoming frogs, and so we can't have long to wait until our taddies begin to metamorphose as well.

Apparently two factors trigger metamorphosis. In many species a simple rise in temperature can trigger the change. In others a lack of food is the causative factor. As the tadpole's food supply in the water is depleted, becoming a frog is a matter for survival, providing access to more food from the surrounding environment. The change from tadpole to frog is generally six weeks to three months, although it can be as much as two years. I hope we don't have that species!!

Watch the process of metamorphosis - the change from tadpole to fully-fledged frog is really quite wonderful. It happens gradually, allowing lots of time to really watch and see Charlotte Mason style. First the tadpole develops back legs, then front legs. Next the mouth starts to widen. The tadpole is now a froglet. Next the eyes start to bulge and the tail begins to shrink and eventually disappear. When the lungs finish developing the froglet makes it’s way onto the land and voila! It’s a frog!

With good reason frogs are protected across Australia,and in Victoria frogs must be purchased from The Amphibian Research Centre. Sadly, I didn't know this, and neither, obviously, did the lady who so kindly collected them for Jemimah. Since we have them now though, we will raise them and then return them to the place from which they were captured. We will enjoy the experience all the more knowing it is likely to be the only time we will watch the metamorphosis occurring.

They're pretty easy to keep. Just remember to change the water (rainwater is best or alternatively tap water than has stood a few days first) whenever it becomes cloudy and give them some food ( boiled lettuce is what we use) and that's it!

One day a pretty pert little frog will be looking you in the face too.
Posted by Jeanne at 5.7.12