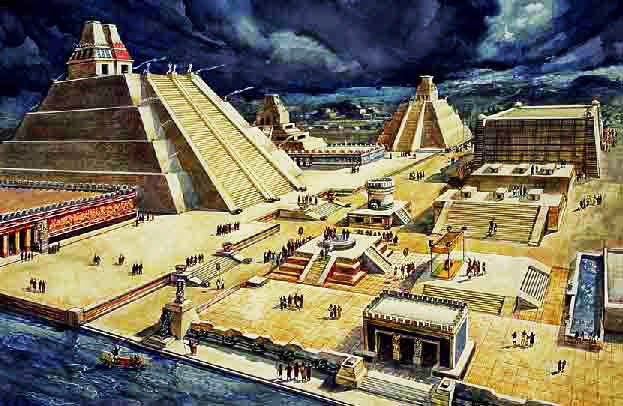 There is something special about weekend, isn't there? Even though we follow a fairly relaxed schedule during the week, Saturday is the only morning I feel free to lounge around.  Which is why I'm still in bed at 9.15 am.  Noice.  Jemimah and her bestie are still in bed too, but there is dance music emanating from the darkness, so I know they're alive.  Hubby, as usual, is up and dressed and working on his laptop in the living room.  I don't complain about that though, because when he's up, the Tea Fairy is working, and that is a very good thing.  I am so spoilt.

We're gorging on culture this weekend.  We're off to the Aztecs exhibition at Museum Victoria this afternoon after swimming lessons to learn a bit about Latin America and the Aztecs, and have a think about the Spanish Conquests. There are some similarities (and differences) between these and our Australian Indigenous history, and I wonder whether the exhibition will highlight this. I'm guessing so.  I am excited to learn more about Cortes and Montezuma because all I know about Latin America I learned through AO, and through this video, which we watched in preparation during the week:

I was interested to realise that the height of Aztec culture was the 1300s - exactly where we're up to in our study of the Middle Ages. Tenochtitlan was apparently bigger that any city in Europe during that time. Perhaps Jemimah will see this link as she adds something to her Book of Centuries.  Otherwise, I might just need to nonchalantly mention something.  Heh heh.

As if that's not enough for any girl, tonight we have tickets to Chroma danced by the Australian Ballet.  It's a triple bill, with a range from pieces set to Tchaikovsky and Mozart right through to Wayne McGregor's post-modern Chroma itself.  I am more of a fan of contemporary ballet now that Jemimah is studying it, because she makes me appreciate the skill that goes into things that appear effortless, but this ballet seems a little bit scary! Let's see what she says about it. Don't you love it when your kids start to teach you stuff? I get dumber every year, it seems, while she is definitely getting smarter.

If that's still not enough, we also have a reservation for dinner out at a favourite Japanese restaurant tonight, but I'm not going to talk much more about that because I've already acknowledged that I'm spoilt once in this post, and well, I am.

Are you doing anything cultural this weekend? Do you like contemporary ballet? Is there an interesting exhibition on at your local museum or gallery?  Are you spoilt too?  Talk to me!
Posted by Jeanne at 14.6.14