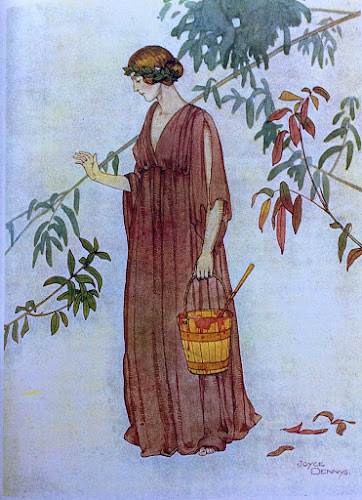 The book of Genesis places man at the head of creation, but makes it clear that he is dependent on nature for his continued existence. In spite of the technology which makes possible synthetic food, clothing and shelter, the human species is still, primarily, a hunter and gatherer of food. Plants must be identified and processed, animals tamed and brought into subjection for the welfare of society. Small wonder that the educators of the nineteenth century emphasised the need for a knowledge of natural science, and that Rousseau's Emile was to be a child of nature. Knowledge was thought to bring mastery.

We Aussies have long been proud of our native land. We delight in our strangely fascinating animals and our uniquely beautiful flora, and right from the very first Australian children's book, A Mother's Offering, written in 1841 by Lady Gordon Bremer, natural history has featured largely in our literature. Initially, children's books were meant to instruct, and A Mother's Offering is pointedly educational, moralistic and judgemental, and, to be honest, fairly boring as well for the most part, but it was not long before our new settlers came to love their new land and to delight in passing their love on to others. 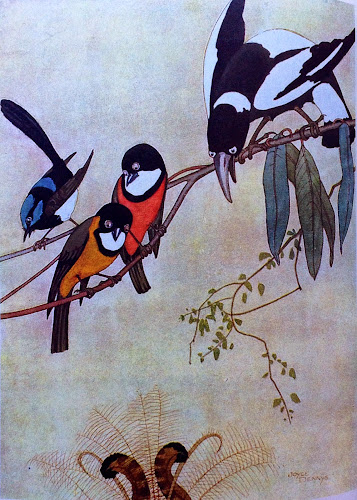 It is easy to see that Amy Eleanor Mack (Mrs Launcelot Harrison) loved the bush. Her writing, both for children and adults, was intended to arouse interest in nature, and is is because of that great love that her books can counted amongst the great Australian living books, even when they are used to teach us to be good...which they generally do!

Bushland Stories, Mack's first book written for children, uses fictional stories to explain the facts of natural history to encourage a love of nature and life. The wind, waves, trees, and of course the animals and birds, are all anthropomorphised. They speak and have emotions, and have much in common with the characters in Gatty's Parables of Nature, of which this volume very much reminds me. The things of nature are used to explain the happenings of natural history to her young readers, as well as to teach character traits such as contentment, kindness and satisfaction with what we have. Because Mack was interested, primarily, in conveying botanical and zoological knowledge, however, the plants and animals still behave like their real counterparts enough that we can learn a great deal from them. In The Cocktail's Party, Bluetip the Blue Wren learns with astonishment that as he has grown his plain brown coat has turned to brightest shining black trimmed with gleaming blue.

"But I don't understand," he said. "I thought I was plain brown, like you, but there I am just like father.""When you were a little boy you were plain brown," explained his mother, "for brown is the safest colour for children and mothers. It is not easily seen and so our enemies do not notice the children who are weak, or the mother when she is sitting on her nest. But now you are a strong bird, Bluetip, and able to take care of yourself, so you need not wear your dingy brown coat any longer, and have got this nice blue suit.""Oh, I am so glad," cried Bluetip. "I have always wanted to have a coat like my father's. I am so happy," and he broke into a joyful song.

Man is the enemy, but not frustratingly so, and he can be kind too. Kids are like that, aren't they? Kind one day; cruel the next. Perhaps we all are.

There are 25 stories in the original 1910 edition, although later editions seem to contain between 15 and 18. Keep an eye out for a full version. I read Bushland Stories to Jemimah as a read aloud, somewhere about AO2 or AO3, but I don't seem to have listed it in our curriculum choices, for some reason. I think it is more worthwhile than that, and would certainly recommend that you include it somewhere between AO1-AO3. You can read a story from the book online at Homeschooling Downunder, here.

Bushland Stories was the first volume in Mack's nature series for young children, followed by Waterside Stories and Birdland Stories, all published in 1910. Be careful of overkill with these stories, but they're worth looking out for if you love the first book. Scribbling Sue, illustrated by May Gibbs, was also a book of stories about how nature can teach us to be good. It's probably a bit too moralistic for my taste. 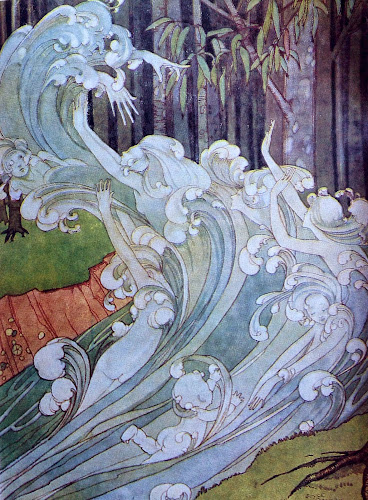 Probably the best known of Mack's books in Aussie homeschooling circles is A Bush Calendar (1909), despite the fact that it is an adult book, and was actually a compilation of articles written for the women's page of the Sydney Morning Herald. It is written as a first person monthly diary of Amy's own wanders in the bush around Sydney, and is illustrated with black and white photographs. It is just delightful - a peaceful type of book - the sort that inspires you to get out into nature to experience it all for yourself.

It was two butterflies that did the mischief to-day. I had quite made up my mind to have a nice day's sewing, and had planned two blouses to be made; but while I sat at breakfast on the verandah those blue butterflies came floating by, and the blouses were forgotten. In and out amongst the red tips of the gum saplings they flittered, living turquoise in a frame of burnished copper. A little wind, too young to be rough, flittered softly after them and set the red leaves dancing as it passed. Some sunbeams, seeing the dancing leaves, came to join in the fun, and butterflies, leaves, and sunbeams danced and sparkled together in the soft sweet breeze.

It was irresistible. I set down my coffee cup and stood up. "It's no use," I said to myself, " no one could be expected to sit still and sew to-day when all the world's a-dancing. It's a day for the bush!" So off to the bush I went.

Jemimah read this beautiful book in AO7, coinciding each monthly chapter with the correct month of the year. The book begins on August 1, but it lost little by being read January to December, and the benefits of reading the correct months were evident. Each chapter ends with a detailed list of flowers in bloom and birds to be found in and around the coastal areas of Sydney, and Jemimah found it interesting comparing these lists to happenings in our own region.

A Bush Calendar has been reprinted by the lovely Michelle from Homeschooling Downunder. Thanks, wonderful lady, for all that you do for us. It is also at Archive.

A Bush Calendar was followed quickly afterwards by Bush Days in 1911. Written in a similar style, Bush Days is a series of undated stories, quite as delightful as those in A Bush Calendar. My favourite story in this volume is about one of my favourite birds, the Silvereye. It's the story of a young lad who learns to his amazement that the 'sivie' sings as sweetly as a canary:

"I had no idea that silvereyes could sing at all," said one of the men, still gazing up into the branches.I laughed. "It's a case of the prophet in his own country.""Evidently," agreed the man. "I must listen to them in future. It's a good thing to know that we have birds that can sing.""It is," I assented, "the pity is that more people don't know it."Then we all went on our ways, leaving the small singer alone. And he, regardless of his audience, and heedless of their ignorance, still sat amongst the glossy leaves, pouring forth his song of joy and thanksgiving unto the world beautiful.

Until I read this chapter, I didn't know that Silvereyes could sing either.

Jemimah read Bush Days in AO7 as well. On the first week of each month she would read the entry from A Bush Calendar; on the other weeks she read from Bush Days. Bush Days is available from Archive.

Amy Mack also wrote another book for adults, The Wilderness, in 1922. I haven't used this with Jemimah yet, but plan to in a couple of years. I'll keep you appraised! 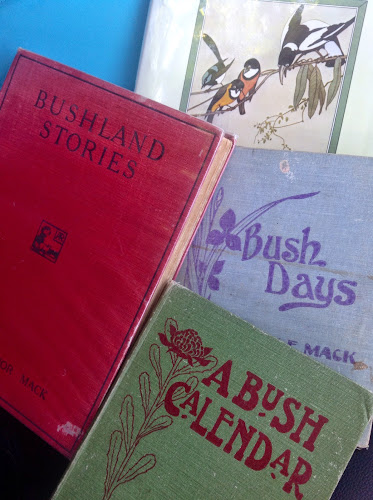