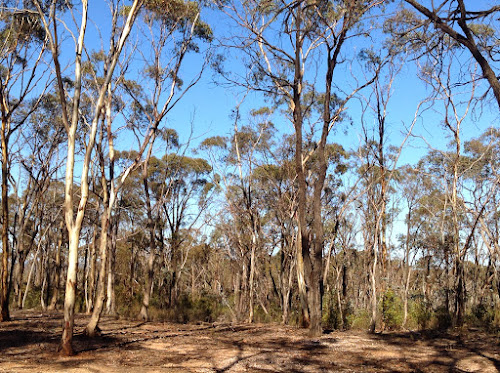 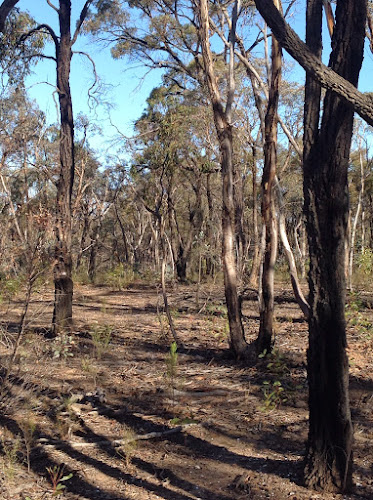 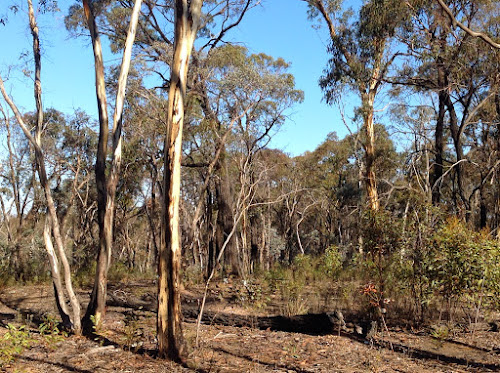 A visitor to the Australian bush could be forgiven for thinking that all he could see was a whole lot of gum trees, or eucalypts. He may even be right. Eucalypts, after all, dominate our forests, and to uneducated eyes, our Aussie bush is superficially monotonous. Most eucalyptus trees are single stemmed, thin and tall. They are wispy and scraggly. They have thin tapering adult leaves bunched at the ends of the otherwise bare branches. The leave are generally grey-green, and hang vertically. They are leathery, a similar colour on both sides, and smell of...er...eucalyptus oil.

Let's have a look at what happens, though, if you 'zoom-in' a little and have a closer look at the trunks of those trees: 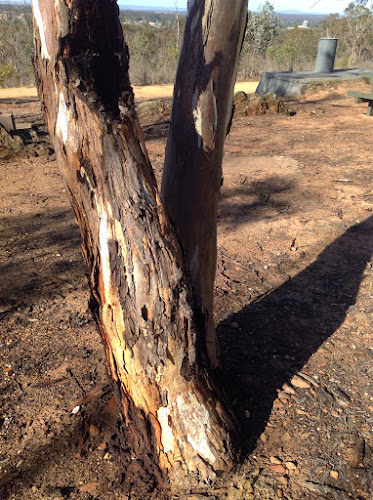 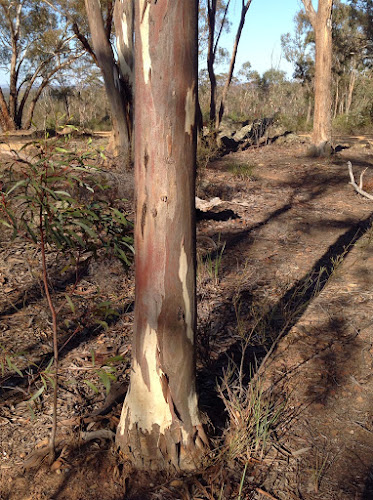 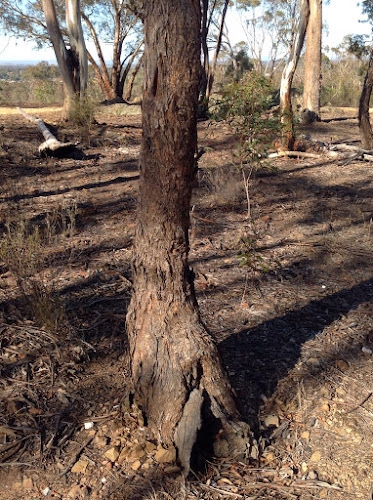 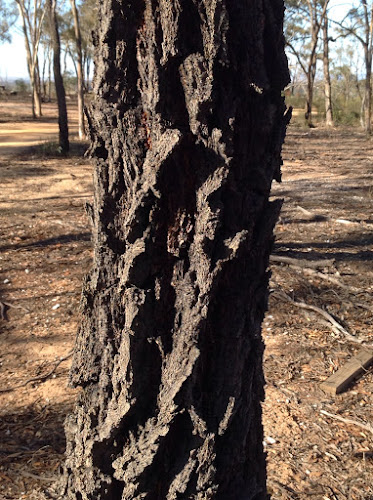 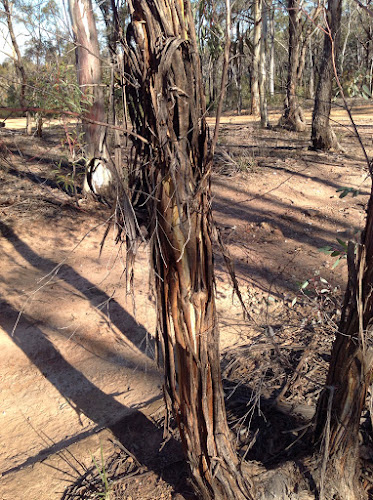 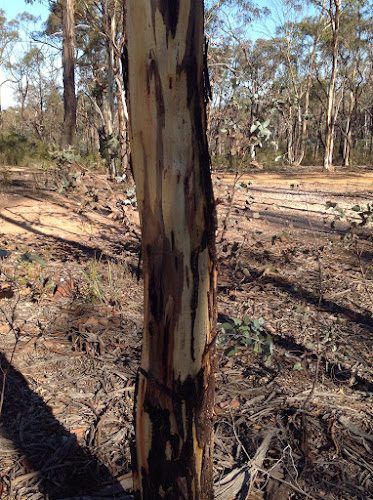 Do they all look the same now?

These photos show some of the eucalypts that grow in the Regional Park that Jemimah and I visit most weeks. Here you will find eucalypts with thin smooth bark, trees shedding their bark in ribbons, rough, thick, scaly bark, and still others with thick, deeply furrowed, almost black bark.  They are certainly not all the same, are they?

Identifying eucalypts is difficult in Australia mainly because there are so many of them.  There are more than 800 recognised eucalypt species, and over 100 of these occur naturally in our state of Victoria.  All are botanically similar, and yet each is also very different from the other.  Not only the bark, but the buds, flowers, fruits, juvenile leaf shape and position, adult leaf shape and position, and number of stems all differ between species, as will growth habit and size.  The challenge is spotting the differences, classifying them, and then making an identification. Yup.

Jemimah has chosen to identify the eucalyptus trees in this local forest as her 'Special Study' for this term. Each week she has been choosing a different tree, observing its growth habits, the positioning and shape of its leaves, the feel of the bark.  She has been making bark rubbings, sketching leaves, noticing size, shape, vein pattern, and noting whether they are opposite or alternate, and so on.  Later in the year, she hopes to note flower colour and buds.Since the buds are so distinctive, we plan on these letting us know if her initial identification has been correct.

So far, she thinks she has identified the following species:

I'll let you know later in the year whether she was right, and if she finds more.

(Form) IIB... are expected to do a great deal of out-of-door work in which they are assisted by The Changing Year, admirable month by month studies of what is to be seen out-of-doors. They keep records and drawings in a Nature Note Book and make special studies of their own for the particular season with drawings and notes.

The studies of Form III for one term enable children to ––"Make a rough sketch of a section of ditch or hedge or sea-shore and put in the names of the plants you would expect to find." "Write notes with drawings of the special study you have made this term," "What do you understand by calyx, corolla, stamen, pistil? In what ways are flowers fertilised?" "How would you find the Pole Star? Mention six other stars and say in what constellations they occur." "How would you distinguish between Early, Decorated and Perpendicular Gothic? Give drawings." Questions like these, it will be seen, cover a good deal of field work, and the study of some half dozen carefully selected books on natural history, botany, architecture and astronomy, the principle being that children shall observe and chronicle, but shall not depend upon their own unassisted observation.

The study of natural history and botany with bird lists and plant lists continues throughout school life, while other branches of science are taken term by term.

Charlotte Mason, Towards a Philosophy of Education p 219-20


We don't know much about Special Studies in Charlotte Mason's schools, except that they did them.  The PNEU programmes mention them regularly, saying something like this:  "For out-of-door work take some special study. " Often an accompanying book will give ideas, and we notice from the quote above, that Miss Mason expected that the students would not depend upon their own unassisted observations too much.  Given the struggles Jemimah has had in identifying the eucalypts, I get what she means, here.  The observation is valuable in and of itself, but we will not definitely depend upon her results unless we can find so 'expert' who can corroborate her findings. And that is not me.  Ahem.

It seems that generally Miss Mason's students did a special study for a full term, and we have followed this plan.  Jemimah has studied wildflowers, exotic garden flowers, English park trees, insects in our garden.  She has followed six garden trees throughout a year. One term she studied pumpkins and the gourd family, Cucurbitaceae, and another, carrots and the carrot family, Apiaceae.  Overseas, she has studied local birds, mammals, flowers and butterflies in detail.

It seems that Miss Mason's students had some part in choosing their own special study, although during some terms they are asked to choose flowers or trees or twigs.  For the most part I have done the same.  I have provided the general topic; she has decided what to do within that.

Special Studies is  delightful, because the child gets to know a subject in detail. Although Jemimah will only be studying eucalypts for a term, her increased knowledge is also proving handy during our bush walks, and we look at her identified species as special friends - Look Mum, there's a Red Ironbark over there!  I'm sure that we will always look at our Australian bush with different eyes after learning to really see what is there.  The benefits of Special Studies are evident.  It is nice that they are good fun as well, isn't it?
Posted by Jeanne at 4.5.15