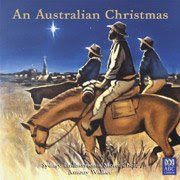 Rudolf the Red Nosed Reindeer and Dashing through the Snow are really silly when the sun is shining and its 40° outside. So are Christmas cards with snow scenes and open fires.

Now you know that I'm a traditionalist at Christmas - I'm not suggesting we throw out such beautiful classic carols as Oh Come, O Come Emmanuel or O Come, All Ye Faithful. As an Anglo-Celtic Australian I lay as much claim to these carols as my cultural heritage as my friend, Lynn, in Lancashire can. I guess what I'm suggesting is that we should look at alternatives for the ones that are totally irrelevant to our lives in the Antipodes.

The good news it that there are alternatives!!

The most famous Australian carols are a series of fifteen penned by William James, composer, and John Wheeler, lyricist, between 1948 and 1961. Both men were employees of the ABC - James as Federal Director of Music and Wheeler as a scriptwriter in general programming.

As the carols of the old world owe so much to the local colour of the countries which produced them, so it was felt that the new land of Australia - where Christmas is celebrated in high summer - should have its own carols with their distinctive background.

These carols resound with the images of Australia - tree ferns and Christmas bush; brolgas and wood larks; red dust and yellow moons. We hear The Three Drovers on commercial radio occasionally during December, and a version of it it features in the Sing Vocal 1975-1984 CD produced by the ABC.

Across the plains one Christmas night
Three drovers riding blithe and gay,
Looked up and saw a starry light
More radiant than the Milky Way;
And on their hearts such wonder fell,
They sang with joy. 'Noel! Noel! Noel! Noel! Noel!'

The air was dry with summer heat,
And smoke was on the yellow moon;
But from the heavens, faint and sweet,
Came floating down a wond'rous turn;
And as they heard, they sang full well
Those drovers three. 'Noel! Noel! Noel! Noel! Noel!'

Wheeler's works were once learned by generations of Australian schoolchildren - I have fond memories of learning The Three Drovers and Christmas Day during my school years. It is not so today. Is this because kids today prefer singing about snow and ice? I don't think so...

Perhaps it is because they're out of fashion with today's public school teachers that Wheeler and James' carols are hard to get hold of today - or perhaps its the fact they're hard to buy that is stopping the teachers teaching them. I don't know. I only know that they're good - good enough to look around for.

Five of the carols are available on the ABC Classics CD, An Australian Christmas featuring the Sydney Philharmonia Motet Choir. I bought mine online from the ABC Shop for $19.95 plus postage.

The North Wind is tossing the leaves,
The red dust is over the town,
The sparrows are under the eaves,
And the grass in the paddock is brown;
As we lift up our vices and sing
To the Christ-Child the Heavenly King.

The tree-ferns in green gullies sway;
The cool stream flows silently by;
The joy bells are greeting the day,
And the chimes are adrift in the sky,
As we lift up our voices and sing
To the Christ-Child the Heavenly King

If you're mourning the lack of Rudolph, don't forget the similar silly fun of Rolf Harris' Six White Boomers...

Early on one Christmas Day, a Joey Kangaroo
Was far from home and lost in a great big zoo
Mummy, where's my mummy, they've taken her away
We'll help you find your mummy son, hop on the sleigh

Up beside the bag of toys, little Joey hopped
But they had'nt gone far when Santa stopped
Un-harnessed all the reindeer and Joey wondered why
Then he heard a far off booming in the sky

Pretty soon old Santa began to feel the heat
Took his fur-lined boots off to cool his feet
Into one popped Joey, feeling quite OK
While those old man kangaroos kept pulling on the sleigh

Joey said to Santa, Santa, what about the toys
Aren't you giving some to these girls and boys
They've all got their presents son, we were here last night
This trip is an extra trip, Joey's special flight

Soon the sleigh was flashing past, right over Marble Bar
Slow down there, cried Santa, it can't be far
Come up on my lap son, and have a look around
There she is, that's mummy, bounding up and down

Kids love this silly song. I must admit I have a soft spot for it too - provided it's the original Rolf Harris Version. Its been part of Christmas for me since my childhood.

Have a look at the fun picture book with accompanying CD sung by Rolf. The book includes the full lyrics to the song, written by Rolf and his friend John D. Brown, with accompanying watercolour illustrations by Bruce Whatley to bring the song to life for the littlies.

The CD includes a recording of the song as well as two bonus Rolf Harris tracks - Christmas in the Sun and the very funny Pavlova.

This is a great Christmas pressie for overseas friends and family as well.

Dashing through the bush, in a rusty Holden Ute,
Kicking up the dust, esky in the boot,
Kelpie by my side, singing Christmas songs,
It's Summer time and I am in my singlet, shorts and thongs

Engine's getting hot; we dodge the kangaroos,
The swaggie climbs aboard, he is welcome too.
All the family's there, sitting by the pool,
Christmas Day the Aussie way, by the barbecue.

Come the afternoon, Grandpa has a doze,
The kids and Uncle Bruce, are swimming in their clothes.
The time comes 'round to go, we take the family snap,
Pack the car and all shoot through, before the washing up.

The words to this one will be familiar to most Australians - Aussie Jingle Bells has been sung at concerts, Christmas pageants and more for several years. In this book, Colin teams with illustrator Nick Bland, to present the song in a hardback picturebook format, with plenty of Aussie scenery and a CD recording of the song.

Another good book for folk in the 'Old Country'...you know, the one full of snow and ice...that country!!