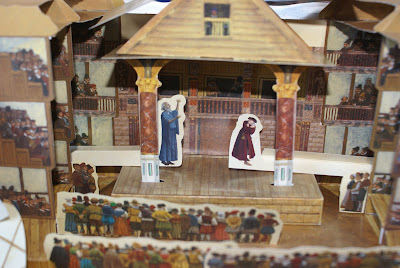 ...or not to Shakespeare. That is the question.

Do you remember your first exposure to the great bard? Mine was Macbeth in 4th Form. My Penguin paperback copy still sits on my bookshelf and as I nostalgically thumb through its pages I notice margins of closely spaced micrographic writing and am struck with the difference between it and my current scrawl, until I remember that this was the year that I decided that my friend Cathy's writing was much classier than mine and I tried altering mine to look just like her calligraphic hand. Of course I never quite succeeded, but as I look at it now I am impressed with my script's neatness and with the uniform size and shape of the letters. Perhaps it's sad that it didn't stick. Too many years of University lectures for neat writing in this old gal.

I wish I could tell you that my paperback is well thumbed, but it is not, leading me to wonder whether I actually ever read the book right through. I know that we were supposed to. I also know that we saw a performance of the play - and a film - so I suspect that I could have written a pretty good essay without ever reading the book - especially with a good copy of the illicit SparkNotes .

I dreamed that William Shakespeare's ghost
Sat for a civil service post.
The English paper for that year
Was on the subject of "King Lear."
William answered rather badly -
You see he hadn't had his Bradley.

Actually, A. C. Bradley's Shakespearean Tragedy is a great work. Wish I could say the same for SparkNotes :)

I don't really feel guilty about that, you know. Well, if I deceived my teachers I feel sorry about that, but I don't feel sorry if I never made my way right through the book. Shakespeare was meant to be seen on stage. The written version is a script - designed for the actors to read and interpret - not an end in itself. I think a lot of people forget that.

I do know that this introduction to Shakespeare at the age of 15 or 16 has lead to a life long love affair. Since that time I have read many Shakespeare plays for pleasure and seen many more acted. Macbeth is still my favourite - probably because we studied it in such depth (remember those hand written margins, girls!).

Without this wonderful introduction to Shakespeare in my own life, I wonder whether I would have been so willing to embrace a study of his works in my own daughter's education. And yet study him we must. Shakespeare is widely regarded as the greatest writer in all of English literature. He continues to be the most-quoted author in the English language. For instance, who hasn’t heard the line, “To be, or not to be: that is the question”? He permeates our language and our culture. Shakespeare is everywhere. Just google to discover how much richer is the English language because of his work.

Charlotte Mason introduced her students to the bard in the very first year of their schooling and encouraged its study throughout the child's education. Ambleside Online suggests the same.

And Shakespeare? He, indeed, is not to be classed, and timed, and treated as one amongst others, - he, who might well be the daily bread of the intellectual life; Shakespeare is not to be studied in a year; he is to be read continuously throughout life, from ten years old and onwards. But a child of ten cannot understand Shakespeare. No; but can a man of fifty? Is not our great poet rather an ample feast of which every one takes according to his needs, and leaves what he has no stomach for? A little girl of nine said to me the other day that she had only read one play of Shakespeare's through, and that was A Midsummer Night's Dream. She did not understand the play, of course, but she must have found enough to amuse and interest her. How would it be to have a monthly reading of Shakespeare - a play, to be read in character, and continued for two or three evenings until it is finished? The Shakespeare evening would come to be looked on as a family festa; and the plays, read again and again, year after year, would yield more at each reading, and would leave behind in the end rich deposits of wisdom.

In this excerpt Miss Mason speaks about introducing the actual plays to children at about ten years of age. Elsewhere she acknowledges that William Shakespeare wrote for adults. Well, I think she did - I can't find the reference right now though. Anyhow, we know he wrote predominantly for adults. We know we must be discerning when reading his plays to young children. The bard's characters are often flawed and sometimes immoral, and this is probably why this was one of the rare instances where Miss Mason herself found a retelling of the story acceptable. After all, if a study of Shakespeare is to go on for the 12 or 13 years of a child's education then there is plenty of time to read or watch the original version later.

We probably read Shakespeare in the first place for his stories, afterwards for his characters, the multitude of delightful persons with whom he makes us so intimate that afterwards, in fiction or in fact, we say, 'She is another Jessica,' and 'That dear girl is a Miranda'; 'She is a Cordelia to her father,' and, such a figure in history, 'a base lago.' To become intimate with Shakespeare in this way is a great enrichment of mind and instruction of conscience. Then, by degrees, as we go on reading this world-teacher, lines of insight and beauty take possession of us, and unconsciously mould our judgments of men and things and of the great issues of life.

So why do many parents have a problem introducing Shakespeare?

What is so hard about reading stories to our children? We don't usually have a problem with that.

What makes us afraid of this man's work - this man in particular? Sadly, I think it is a lack of Shakespeare in some mums' own educational past - or worse, a bad experience of difficult language introduced too late - that leads to a fear of teaching Shakespeare, and it is this fear of the unknown that induces many well meaning parents to either delay the study until much later - or worse, for ever.

There is another problem that parents have with Shakespeare too - one that I find more common with this study than with any other: all to often they commit the unthinkable sin in a Charlotte Mason education of coming between the children and the soul of the book.

...but let us be careful that our disciplinary devices, and our mechanical devices to secure and tabulate the substance of knowledge, do not come between the children and that which is the soul of the book, the living thought it contains.

I suppose you know by now that I keep to that axiom always. Let the books teach the children.

So now I'm going to tell you what I do. It's simple - there is no rocket science to be gleaned here.

My daughter is 7½. She is in AO2. We read from Edith Nesbit's The Best of Shakespeare - Retellings of 10 Classic Plays. It contains 10 of the 20 plays contained in her Beautiful Stories of Shakespeare. The only advantage to this book is that it is readily available in Australia. Beautiful Stories - at least when I was looking for it - is not. 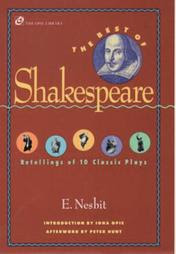 We follow the plays as written in the Ambleside Online schedule, and in this way the most appropriate plays for younger children are tackled first. If the play is not in my Nesbit book I use Lamb's Tales from Shakepeare. I prefer Nesbit because she uses easier language, and most of the plays are half the length of Lamb's version. (I have a beautifully illustrated version of Lamb though, so I do use the pictures!) I read slowly and expect a narration after each episode of a story. If Jemimah is unable to narrate a section we discuss it before moving on. At the end of the story she narrates the whole play.

Later in the week we revisit Shakespeare again. We recap the story. Sometimes we act out a scene in our pop-up Globe theatre. (This is a wonderful resource by the way. You can see a pic at the beginning of the post, but I'll write a separate review of this one.) After this we watch the relevant BBC animated video on YouTube. Jimmie has gathered these together for us here. You can buy them from Amazon too. I wish I had them!

We like these videos. Written by children's author Leon Garfield, and using predominantly Shakespeare's own words, the videos make us realise that we can understand the playwright's classical language. We already know the plot - now we can relax and enjoy the story for what it is - great drama.

At the end of this Jemimah has an abridged and colorful version of Shakespeare's original play. She has a sense of what the play is about, and mostly she is excited to someday see them acted in their entirety.

For us that might happen sooner than she thinks. The Australian Shakespeare Company is perfoming A Midsummer Night's Dream in the Royal Botanic Gardens Melbourne this summer, and we're going. I'm sure that it is entirely possible that fairies come out to play in the Botanic Gardens after dark. A picnic hamper and a bottle of champagne (for the olds) might help our imaginations along too.

So back to my original question: To Shakespeare or not to Shakespeare? To me there is no question at all.