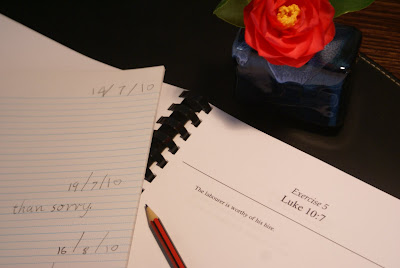 The gift of spelling depends upon the power the eye possesses to 'take' (in a photographic sense) a detailed picture of a word; and this is a power and habit which must be cultivated in children from the first. When they have read 'cat,' they must be encouraged to see the word with their eyes shut, and the same habit will enable them to image 'Thermopylae.' This picturing of words upon the retina appears to be to be the only royal road to spelling...

Quick! Hide me! The Ambleside Online Police may be knocking on my door some time in the next few weeks. I have strayed from the curriculum. I have failed them. I have gone my own way.

But only a little bit...honest, Officer!

For some time now I have been concerned with Jemimah's spelling. It is, to be perfectly honest, atroshus. Reely, reely terrabul even. Now this shouldn't surprise me unduly. I shouldn't even be worried, because unlike our local public school, where kids bring home their first list of spelling words within the first week of Grade Prep, Jemimah has never had a lesson in spelling in her life. She reads beautifully, she has been taught a few phonics rules - just a few, and that is it. The problem is that it shows. She can't spell.

Now I was a natural speller. I was always good at it. The idea that my clever daughter might not be horrifies me.

This kid can't spell basic words - like what and ball and when. Really common words. Words she has seen over and over and over. "Shut your eyes! Picture what the word looks like! Now can you spell it?" I ask her, almost pleading. But no. She can't. I could. Clearly Miss Mason thought this was the idea as well.

So now I have decided to do something about it. I am going to teach her to spell. And I am going to do it now - in the third term of AO3. Which is when, as her teacher, I have judged that she needs it and not in AO4 or AO5 when she is ten.

Which is why the AO Police will be arresting me any day now and taking me away for re-education with the peasants in Siberia.

Now when I think rationally I believe that if I introduced spelling at the stage AO recommends, it would work, but when I noticed that children of 8 and 9 were using dictation as an aid to spelling in Charlotte Mason's classrooms I decided that it was only logical to introduce it in my classroom as well. Especially since my student was aware of her poor spelling and was highly motivated to do something about it.

Dictation lessons, conducted in some such way as the following, usually result in good spelling. A child of eight or nine prepares a paragraph, older children a page, or two or three pages. The child prepares by himself, by looking at the word he is not sure of, and then seeing it with his eyes shut. Before he begins, the teacher asks what words he thinks will need his attention. He generally knows, but the teacher may point out any word likely to be a cause of stumbling. He lets his teacher know when he is ready. The teacher asks if there are any words he is not sure of. These she puts, one by one, on the blackboard, letting the child look till he has a picture, and then rubbing the word out. If anyone is still doubtful he should be called to put the word he is not sure of on the board, the teacher watching to rub out the word when a wrong letter begins to appear, and again helping the child to get a mental picture. Then the teacher gives out the dictation, clause by clause, each clause repeated once. She dictates with a view to the pointing, which the children are expected to put in as they write; but they must not be told 'comma,' 'semicolon,' etc. After the sort of preparation I have described, which takes ten minutes or less, there is rarely an error in spelling. If there be, it is well worth while for the teacher to be on the watch with slips of stamp-paper to put over the wrong word, that its image may be erased as far as possible. At the end of the lesson, the child should again study the wrong word in his book until he says he is sure of it, and should write it correctly.... 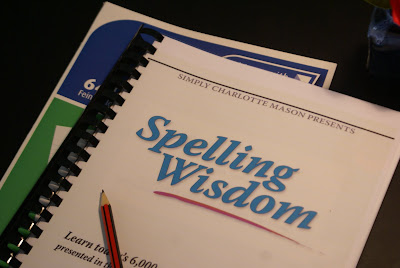 At least when the Ambleside Online Coppers come a calling they will comforted to know that I am teaching spelling the CM way - through visualisation; that power of the eye to take a detailed picture of a word. Miss Mason was of the opinion that this was the key to good spelling.

With this as our premise, she then goes on to caution us about the danger inherent in a child being allowed to see incorrect spelling:

An error once made and corrected leads to fearful doubt for the rest of one's life, as to which was the wrong way and which is the right. Most of us are haunted by some doubt as to whether 'balance,' for instance, should have one 'l' or two; and the doubt is born of a correction. Once the eye sees a misspelt word, that image remains; and if there is also the image of the word rightly spelt, we are perplexed as to which is which.

Fortunately, Miss Mason then goes on to explain to us a method that 'usually results in good spelling'. It is called Studied Dictation, and in the quote above she explains exactly how to go about it. Notice that there are no spelling lists. Words are learned in context along with the accompanying grammar and punctuation. The words are meaningful. The passage is from a living book - generally one of the child's literature texts. The child understands what is being said.

The only problem that I could see with Miss Mason's method was that it required prior preparation by her teacher...and that meant me. Now I am reluctant to commit to much that requires work by me out of school hours. Those hours are family time. It is my practice to prepare thoroughly at the beginning of the year; to revise at the beginning of each term and then to do very little more. I was a little reluctant to commit to this process of selecting passages that fit all of Miss Mason's criteria, but which also covered all of the basic spelling words - regular and irregular that my child would need to learn during her time at school.

I'll leave Sonya to have a chat to you about how to do Charlotte Mason Studied Dictation the easy way. It's called Spelling Wisdom, and it's published by Sonya Shafer through Simply Charlotte Mason. Have a listen to her now:

To me, Spelling Wisdom is CM dictation the easy way. Today's 6000 most frequently used words are presented in the words or great writers, and many are from books or authors Jemimah has studied: Robert Louis Stephenson's poems; The Bible; Shakespeare; Hans Christian Anderson; Robinson Crusoe; Sherlock Holmes; Wind in the Willows; and more. Many of them, in fact, are the very same passages I would select myself if I were preparing dictation from scratch.

Even better, the programme comes in both British/Australian and American English. Spiffing!

We've only been using the method now for a few weeks, but already Jemimah's spelling has improved immeasurably. The spelling of ought leads to bought, sought, thought, fought and wrought. First begats thirst. Preach leads to teach, peach, and reach. More importantly, her confidence has improved. She is no longer embarrassed by the fact that her six year old cousins spell better than she does. She is coming ahead in leaps and bounds, and she knows it.

Jemimah is still a pretty lousy speller, and will be for some time to come, but I now have confidence that she will be able to spell reasonably eventually, and that allows this natural speller to breathe a sigh of relief.

When I tell all that to the Ambleside Online Policeman, do you think he'll let me off? Siberia gets pretty cold in winter I'm told.