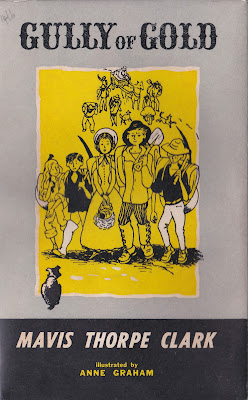 One of the biggest challenges I face when Australianising AO is not finding good Living Books to include on a particular topic, but rather deciding on which of the ten or twelve books I have compulsively collected on any particular period of history to exclude!

I have found that especially in AO5 because fewer of the books in this year are Americocentric and so I need to be particularly careful not to overload Jemimah with too many extra books. This term we have been studying the gold rush and Ned Kelly. I had already added books on both of these topics into the weekly readings list as well as a number of Australian general titles into the Free Reading list, and I really couldn't justify adding any extra. This book though, Gully of Gold, written by Mavis Thorpe Clark in 1958, just wouldn't stay quietly on the bookshelf, but kept coming back to haunt me. Just when I least expected it.

Finally a month or so I gave in and added it to the Family Book Bag for reading on our journey to and fro Melbourne each weekend. I'm so glad I did.

It's the story of the Bennett family, sensible Jane Ellen, 17, self-confident Richard, 16, determined James, 10, and angelic looking but surprisingly mischievous Sarah, 9, who emigrate to Australia accompanied by their Uncle Harry in search of a better life. On the way their uncle dies leaving them alone and with the princely sum of £19 to survive on. Jane Ellen, of course would have liked them to return directly to England, but upon nearing Australia the family hear that gold has been discovered, and Richard and their friend, Peter, a young stowaway they have met on the journey are immediately consumed with a bad case of gold-fever. The young family set out for Ballarat and the diggings.

Gully of Gold is a terrific book because Clarke manages to incorporate historical knowledge into the narrative without you realising that she is doing so, and through its inclusion you learn an amazing amount about the gold rush without feeling that you're being force-fed. You hear about how ship captains moor their boats off shore to prevent their sailors disappearing to make their fortune. You see a vivid picture of historic Melbourne, its streets deserted of people as everyone leaves for the diggings. There is the Lamb Inn in Collins Street, Coles Wharf, the Botanic Gardens founded by Governor La Trobe. Princes Bridge is newly built and Swanston Street, its footpath, filled with puddles, is still unmade. The GPO is already there on the corner of Bourke and Elizabeth. Historic Melbourne comes alive.

The difficult trip by foot to the diggings is harder than I ever dreamed, but I could imagine them all the way. Even the Lerderderg River gets a mention.

All this of course is just background information for the real story - life on the Ballarat gold fields. There are the licence hunts, the visits from the troopers and the Commissioners, the echoing calls of Joe! Joe! Joe! There are the Vandemonians - free convicts and the fear and dislike that is displayed by the free settlers. There is robbery, theft, anger, rivalry, jealousy, suspicion and strife, but also mateship and loyalty and a willingness to help. There is illness and calamity and of course a lost child.

And at the end there is a happy ending. As there should be.

If you like John of the Sirius you'll love Gully of Gold. I think it is even better because these children live though history as it really was - they don't change it. At times with the John books it is hard to imagine what history was really like without John playing a major role in everything that happened. Not so Gully of Gold. This book is terrific.