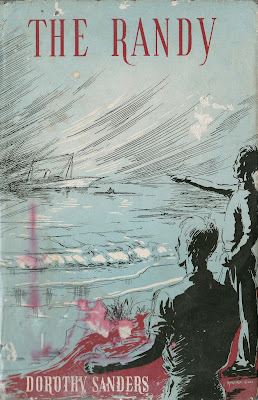 Jeem was dead and nothing that the Police Commissioner and my father could say about it could alter that fact. I saw him dead. His sallow face was an unearthly green-grey; his sodden clothes were bunched up round him and his wet hair lay black and draggled over his brow. I saw him lying like that on the rocks up at the bay, and so did Joe and Sven and Ilka though they denied it...denied they even knew me...I pleaded with Joe, the tears in my eyes. I couldn't believe that he would pretend that he didn't know me, it was cruel beyond belief...That Joe...should be looking at me with that strange stare and denying that he'd ever been to the bay...that there'd ever been a ship called the Randy.

Those of you that follow A Peaceful Day's Australianised AO curriculum are going to be grumpy with me when you get to AO6. We're up to Week 9 of first term, and nary a planning post have you seen. Sorry. I'm going to attempt to rectify this very shortly because it is far easier to write about what you're doing while you're doing it rather than when you've finished. The term has just gone so fast, and in this year when we complete one rotation of the history cycle at the end of term one and then zoom back in time to the ancients in term two, it is increasingly urgent that I get some stuff into print.

The time period for term one is from the end of WWI to modern times. What a huge era to fit into one little 12 week term. Critical events on the Aussie timeline include the critically important invention of Vegemite; Howard Florey and the almost as important discovery of penicillin; the Great Depression; John Flynn, the RFDS and the School of the Air; WWII and particularly the Pacific War; the Snowy Mountains Hydro-Electric Scheme; Korea and Vietnam; the Indigenous right to vote, immigration and more. In one term. Yep. Ahem.

After much deliberation I decided to cover in detail WWII and John Flynn, certainly the best known and most influential Presbyterian (and maybe Christian?) in Australia's history. Howard Florey is worthy of study too, but I'm going to include his bio in science, so we'll cover him later. The rest just gets a mention in our general Aussie history text, History of Australia by Manning Clark and Meredith Hooper. Hopefully we'll cover them next rotation.

Our Aussie literature book for this period was Nowhere to Hide by Mavis Thorpe Clarke, which paints an accurate picture of life back home in Australia in WII whilst telling an intriguing mystery story about an escapee from a Victorian POW camp. The story is thrilling enough to maintain Jemimah's attention, and since there is no direct fighting, she hasn't suffered the war and battle burnout she had been feeling the past few terms. From its pages we've learned about rationing, coupons, brown-outs, and other aspects of Australian war time experience. I personally have found the descriptions of Melbourne particularly interesting, and we spent much time last week learning about General Maccarthur's requisitioning of the now demolished Menzies Hotel. This localising of history really brings it alive for us.

John Flynn was included as our Australian bio. AO doesn't recommend a specific bio for this term, but then surprisingly includes the biography of Winston Churchill in term three (ancient history). We moved this to its correct historical term one and added in Flynn with The Flying Doctor: John Flynn and the Flying Doctor Service by Barry Brown. This book is more factual than many accounts of the life of this amazing Australian and includes Flynn's early life as well as information on the School of the Air which was finally established after his death. It's a quick easy read, and we've learnt a lot about this worthy man of faith. In the 1950s, former Prime Minister Sir Robert Menzies described the RFDS as "perhaps the single greatest contribution to the effective settlement of the far distant country we have witnessed in our time." It is great to know more about its founder.

Other books on the time period have had to be added to Free Reads to avoid adding too many books to the AO word count. The short novel by Dorothy Lucie Sanders, The Randy: the Story of a Mystery Ship has been the standout highlight of these. Right from the opening paragraph, typed above, we were hooked. The quest to discover the reason for Jeem's death takes us on a wonderful sea journey through islands in the Timor Sea occupied by Japanese soldiers, over to America, eventually back down the Western Australian coast and finally to the discovery of the ship called the Randy that Joe denied the existence of in the very first paragraph. The background of it all is the intrigue of the war. The Japanese, the Americans and the Aussies. The war that was on our very doorstep. I know of no better way to learn of it than this marvellous little story. Other good books to add to Free Reads covering the WWII period are here. We'll be covering a few before the end of term and later in the year as well, I'm guessing.

Our final highlight this term has been Colin Thiele's Sun on the Stubble. An extremely humorous account of the life of a German immigrant family on a SA farm during the Depression, this free read was a delight, and a favourite of us all. All Thiele's books are good. This is one of his best.

I'll be back with a rundown on the rest of the AO6 Term 1 substitutions very soon. Honest I will. I'm still typing on an iPad. If we could only get our desktop computer working properly I'd be a very happy girl. Sigh.