The Town that Never Forgets 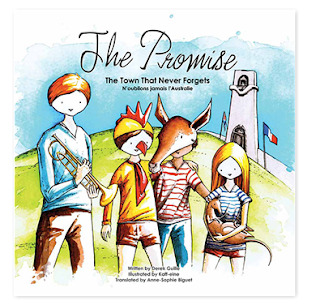 The first inhabitants of Villers-Bretonneux to re-establish themselves in the ruins of what was once a flourishing little town have, by means of donations, shown a desire to thank the valorous Australian Armies, who with the spontaneous enthusiasm and characteristic dash of their race, in a few hours drove out an enemy ten times their number...They offer a memorial tablet, a gift which is but the least expression of their gratitude, compared with the brilliant feat which was accomplished by the sons of Australia...Soldiers of Australia, whose brothers lie here in French soil, be assured that your memory will always be kept alive, and that the burial places of your dead will always be respected and cared for...

It was probably foolish of me to promise a book review a day in the lead up to Anzac Day.  All it made me do is not want to blog.  And if I did blog, I didn't want to post about Anzac Day.  I wanted to talk about how we store our posters and the map we're using for David Livingstone, and all sorts of highly interesting, but totally unrelated to Anzac Day topics.  Foolish.  Still, here we are at the end of the day, and I am blogging, and I am going to tell you about a book.  I totally can control my contrariness when I work hard at it.

Today's book is an interesting one.  It's called The Promise: The Town that Never Forgets.  It's also called N'oublions jamais I'Australie, because it's a bilingual book, written in English and French.  It's written in two languages, because this is a book that belongs to both France and Australia.  It's the story of both the Aussies and the French in a little village called Villers Bretonneux in Picardie in Northern France at the end of WWI.

In 1918, the small town of Villers-Bretonneux fell to German forces.  Members of the 4th and 5th Division of the AIF were tasked with retaking the town, and after two furious battles, the town was recaptured by the Australian troops on 25th April 1918 at a cost of over twelve hundred Australian lives.  The villagers promised to never forget the Australian sacrifice, and they have kept that promise for almost one hundred years.

Derek Guille, The Promise's author is a music journalist and ex-radio presenter with the ABC, and in 2007 he was invited to join the Melbourne Symphony Orchestra on its 2007 European tour.  During their time in France, Members of the Brass Section visited Villers-Bretonneux, inviting Guille to recite the Ode of Remembrance at a private commemorative service for those who served.  Guille realised that the story of Villers Bretonneux was one that all Australians should know, and he also wanted Australians to realise the strength of the friendship that remains to this day.

THe book that came about tells the original story of Villers Bretonneux in 1918, but it also tells the story of the MSO visit in 2007. Guille is not a story teller - he's a journalist - and it shows, but the journalistic style, while surprising, actually works.  It sort of reads like a Sunday Magazine article, if you know what I mean.

The choice of illustrator is also a surprise.  Kaff-eine is best known as a street artist, and her works generally adorn the sides of buildings in Melbourne's famous cobbled laneways.  Her distinctive and unique style of artwork really makes The Promise different from the rest. Have a look at 6 of her illustrations here. 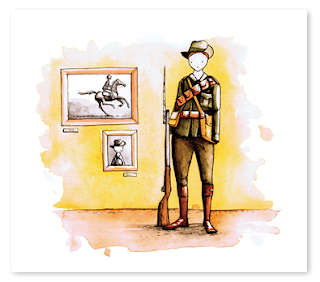 The journalistic style makes The Promise best for kids of 8-12, I reckon. The French language translation is secondary school level.
Posted by Jeanne at 24.4.13