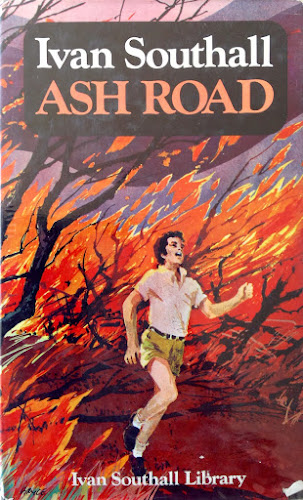 A friend asked me recently if I recommended Ivan Southall's books, and I couldn't really answer. I knew that I had loved them as a child, and I knew that Southall as an author was still very highly regarded, and I knew that his books had won lots of awards, both here and in America, but would they live up to the standard of a Living Book? I wasn't actually sure.

Last Sunday, the 12th of January 2014, I started reading aloud Ash Road, coincidentally on the very same day that the book was set - 12th January 1962. And so we have been reading about Victorian bush fires and north winds and temperatures in the 40s (or 100s) during a week that those very same conditions have been repeated in real life. Temperatures of 44°C for days on end, that same, hot, dry, unbearable north wind sapping our energy and removing the very last drops of moisture from an already dry landscape, and fires burning out of control all around our state.

And so now that we've finished the book, is it Living ?  Definitely yes.  With a capital Y.  Let me tell you about it.

Ash Road is the story of three boys who accidentally start a terrible bushfire.  Very quickly it is out of control:

The fire was getting away from them in all directions, crackling through the scrub down-wind, burning fiercely back into the wind.  Even the ground was burning; grass, roots, and fallen leaves were burning, humus was burning.  There were flames on the trees, bark was burning, foliage was flaring, flaring like a whip-crack; and the heat was savage and searing and awful to breathe.
"We can't, we can't," cried Wallace.  "What are we going to do?"
They beat at it and beat at it and beat at it.
…"What have I done? We've got to get it out!"

Then they saw flames to the right, flames at tree-top height exploding like surf on rocks: waves of flame, torrents of flame, flames spraying in fragment, in thousands of pieces, in flaring leaves and twigs that rained on the road in a storm of fire.  It was upon them in seconds, or they had come upon it so swiftly that there was no turning from it: no time to turn, no chance to turn, no place to turn. 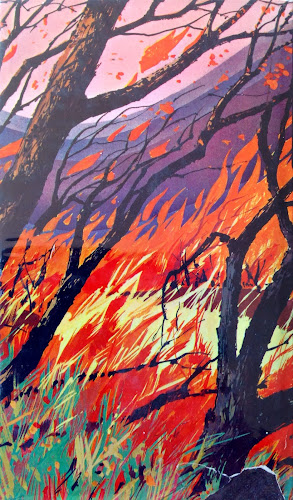 Just over the range from the fire lies Ash Road.  It is home to the Tanners, the Fairhalls, the Robertsons, the Georges, the Pinkards, and the Buckinghams.  On Ash Road are their farms, their homes, and their children.  When the fire gets bigger, all the fathers on Ash Road leave to fight the fire. All the mothers leave to help in the first aid centres.  Leaving the children at home alone…

Southall paints an incredibly realistic picture of that terrible day.  Time moves so slowly.  Everything is surreal - the sky, the heat, the smoke, the strange behaviour of the adults. Finally, the children realise that they are alone.

Southall is renowned for his ability to understand the way young people grow and change in the face of adversity.  The way he does that in this novel is extraordinary.

Ash Road begins with the climax of the story - the realisation that the boys have started an uncontrollable, terrible bushfire.  It is a rare novel that can maintain suspense of this type from beginning to end, but this book does it incredibly realistically, and incredibly well.

We read Ash Road as a Free Read in AO7, but I highly recommend it not only for the Aussie, but for anyone who wants to know what summer in Australia is all about.  You won't get a better description that this.

Believe it or not, this book is actually in print.
Posted by Jeanne at 6.2.14