On finding a geology book 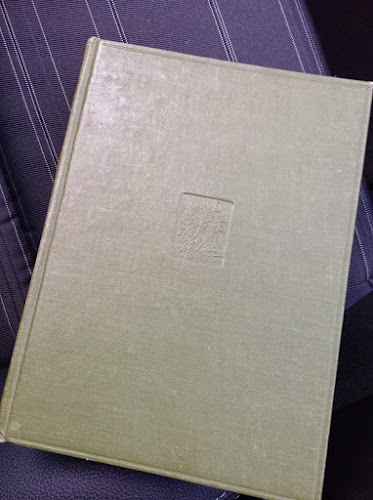 Can I in good conscience teach my daughter using this dull old geology book with its little, grainy black and white photos, that was published in 1929? Because I'm thinking I might. In fact, despite its age, or maybe because of it, I think this may be the perfect AO8 geology book for my daughter. Now before you click away to our friend Abe to search for a copy of your own, you need to be aware that it may not be the perfect book for you. In fact, unless you live in Australia, it probably won't be.

The most logical - and enjoyable way to study geology it to get outside, and look at what's under your feet. It's easier in the country, where the soil and rocks are easier to uncover, but even in the middle of big cities, a road cutting, the banks of an urban creek, or even a construction site will reveal much. If you go to several areas, you may even begin to see differences between them - natural formations, land usage, the rocks, cliffs or hills. All becomes tantalisingly interesting. The problem is, that it's hard to know what you're seeing. Purchasing a geological map doesn't help much either. What does Tertiary mean? Devonian? Silurian? To discover this, we really need to turn to books. Books and Things. Where have I heard that before?

One of the things that makes this old book, Open Air Studies in Australia by Frederick Chapman, perfect, is that it tells me about areas that I can go and visit and walk through and actually see and touch. It mentions Torquay, a beach 15 minutes from my mum's, the ancient dunes of the Mallee, near our home, the Dog Rocks at Batesford that we pass each weekend. Other locations are a drive away. Beaumaris, Lilydale, Sorrento. Admittedly, it would take a year long trip around Australia to cover all the places he mentions and describes, but there is enough close by to really bring alive the geology of our own region, and through it, the geology of the whole world, for while the book has been approached from an Aussie viewpoint, it is not entirely limited to this part of the earth's surface. 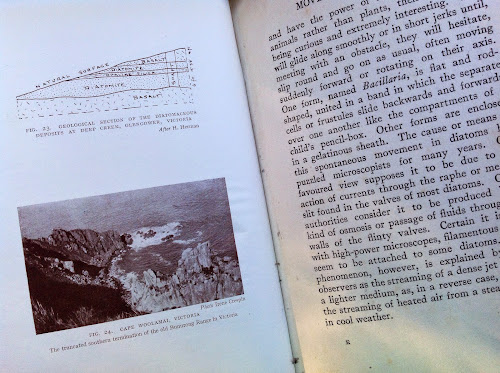 The other thing that makes it perfect is the era in which it was written. Some quotes, I think will show you what I mean here:

Surely the chief charm of the present stories is that while they are true they are not empty of romance, and as one reads one recalled those incomparable lines of Wordsworth:

There was a time when meadow, grove, and stream,The earth, and every common sight,To me did seemApparelled in celestial light,The glory and the freshness of a dream.(From the Foreword)

Even the most familiar objects met with day by day are often virtually unknown to us, though on closer acquaintance they may prove a source of intellectual pleasure, especially if we take the trouble to delve after some of these hidden secrets of nature.

To the earnest seeker "question will be followed by question," until he sees that

Earth's crammed with heaven,And every common bush afire with God.

But how comes the sand where we find it? Our answer lies on the foreshore. At each succeeding tide large quantities of shells and grit are thrown up from great depths of a fathom or two, by the great rollers which break harmlessly on the strand. The shells, along with other hard material, derived, it may be, from a rocky shore, are broken and ground upon one another, chiefly by the back wash of the waves until the shells and rock fragments become changed from shingle to smaller and more rounded fragments, and finally ground into sand, for

Though the mills of God grind slowly, yet they grind exceeding small.

What I hope these excerpts show you, is the literary language of the book, along with his respect for God. Now I'm not saying that Chapman was a Christian, there is no indication of that either way, but he does not denigrate those who believe, and that is incredibly difficult to find in geology books of recent times.

I've talked before of my issues with the age of our earth. Theologically, I'm young earth, but I struggle very much with young earth science. I'm afraid that I find it shoddy, and I hate bad science. Now I am confident that God is truth. Ultimately there will be no real disagreement between what God has revealed in his Word, and what is shown to be true about his creation. If there is a real conflict then the science is wrong. However, we must also be aware that while the Bible is inerrant, theologians are not. Christians made very big mistakes in their interpretation of Scripture during the time of Galileo; it is possible and likely that they also do so today. If there is disagreement between theologian and scientist, it is not always the scientist who is wrong.

Keeping that in mind, then, I am not 100% sure about the age of the earth, and at the very least I want Jemimah to feel comfortable knowing that there are very wonderful Christian men and women who think differently upon this age issue, and that's okay. For this reason, I am happy teaching geology from an old earth viewpoint, such as that contained in Open Air Studies in Australia, provided our faith is respected. That's what I see here, and I love it!! 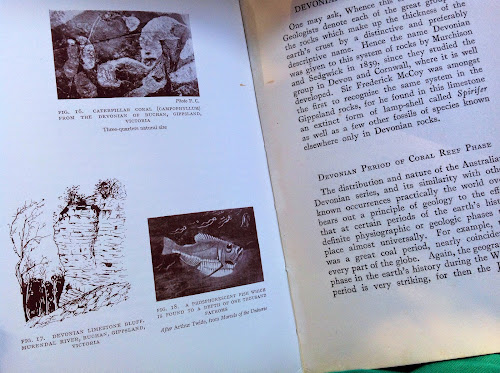 So what am I going to do about the age of the book? Well, not much, I don't think. This will not be the only geology Jemimah will study at school. We can cover advances in science later. We can look at plate tectonics as a stand alone topic, if necessary. We will purchase an up-to-date geological map of Victoria, and we will look at a current geological timeline and make note of where the events written about are said to have occurred. It is possible that the ages are correct, after all. We will keep an ear open for current events covering geological topics. We will read the geological information boards when we visit National Parks and areas of interest. At the end of it all, I may have taught my daughter some out-of-date science, but I don't really mind that much, because I believe that when she finishes reading this book she will be more aware of the amazingness of God's creation, and if she has questions to answer and gaps to fill then she has a whole life ahead of her to fill them. My job is merely to light the spark, after all.

Unsurprisingly, the book is out of print. There are quite a few copies available at Abe if you want to join us.