The story of Lachlan Macquarie 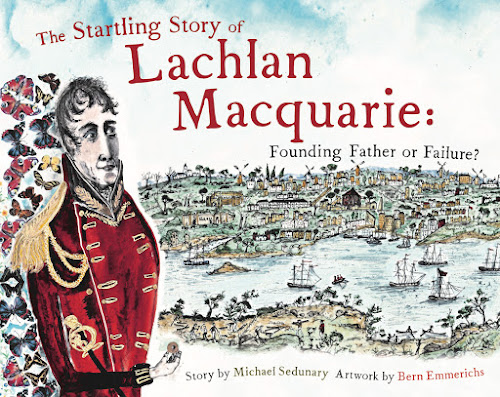 I wonder what you know about New South Wales' fifth Governor, Lachlan Macquarie.  If you're like most Aussies, you'll recognise his name because of the things named after him - Canberra's suburb of Macquarie and Lachlan Street, Sydney's Macquarie Street and Macquarie Place and Hobart's Macquarie Street, Macquarie Island south of Tasmania, Lake Macquarie on the NSW coast, the Macquarie River in NSW and the Macquarie River in Tasmania, Port Macquarie, and the Lachlan River to name a few.  Maybe you've sat it Mrs Macquarie's Chair, overlooking Bennelong Point and the Sydney Opera House. The inscription on his tomb on Mull in Scotland names him "The Father of Australia" and yet we know longer know who he is. Should we?

Arriving in Australia in 1810, Macquarie took up the position of Governor vacated by William Bligh who had been deposed by the military during the 1808 Rum Rebellion (remember that?). From the beginning Macquarie saw the colony as both a settlement as well as a penal colony.  "This country," he wrote, "should be made the happy home of every emancipated convict who deserves it." He was frustrated by what he referred to as 'the party spirit' - the class divisions and factional fighting that were so rife in the colony. "Free settler in general...are by far the most contented persons in the colony," he wrote to the colonial office in England.

Macquarie believed that the solution to the convict problem was to put them to work. During his 12 years as Governor Macquarie was responsible for over 250 new buildings, including churches, schools and hospitals.  He built roads and tidied up the design of Sydney's streets. He built Sydney into a city as fine as any in the world. But England was not keen that Sydney become too attractive.  New South Wales was meant as a place of punishment and they worried that people might actually commit crimes in order to be transported!

Macquarie produced the first official currency for the new colony. He authorised exploration of the 'west' beyond the Blue Mountain where well watered grassland and forests were discovered.  It was Macquarie who ordered all traffic on New South Wales roads to keep left. He encouraged the creation of the colony's first bank. He drew up plans for Castlereigh, Pitt Town, Richmond, Wilberforce and Windsor.

The Startling Story of Lachlan Macquarie - Founding Father of Failure by Michael Sedunary and illustrated by Bern Emmerichs goes some way towards introducing Australian kids to the unfairly forgotten  Governor Macquarie.  It's an oddly sophisticated book, and I am not quite sure who its written for.  It is aimed at kids of 10-12, but I suspect that without some prior history knowledge the story would go over the heads of most of them.  It's a long book using complex language and discussing deep questions, and  I suspect that most kids would lose interest long before the end. That said, it is wonderful for use as part of a study of Australian History. It is well balanced, discussing Macquarie's considerable accomplishments with his many less than stellar decisions.  It covers Macquarie's treatment of the Aborigines in a way that is sensitive to our native Australians but without falling into the trap of revising history inappropriately with the wisdom of hindsight and putting our modern worldview onto past events.

Sadly the book paints Reverend Samuel Marsden as a villain, referring to his moniker as 'the flogging parson' and telling the story of the public lending library - which is probably true, but without balancing the considerable good also accomplished by this powerful man of God.  I am saddened by this. So it is not perfect, but in general The Startling Story of Lachlan Macquarie is an excellent book for a child keen to learn more about the early history of our great country and willing to put in the work to understand it.  It is also great for use as part of a history study for school.  Those of you using my Australianised AmblesideOnline will want to grab up a copy for use during both cycles through Aussie history - it is well worth using twice, and who knows how long it will be in print?

The Startling Story of Lachlan Macquarie is the third in a series by this author - illustrator trio and published by Berbay Books.  The first two are The Unlikely Story of Bennelong and Phillip and William Bligh - a Stormy Story of Tempestuous Times.  I haven't seen either of these but I am keen to.  I am sure they would be excellent.

So there you are.  Hopefully you now know more about Governor Macquarie.  Perhaps once you read the book you will be able to decide whether he deserves to be remembered as the father of Australia.  Do tell me what you think. Can a country really have a father anyhow?