There are no doubt people whose poetic taste is so true and deep,that no amountof neglect in early life has been able to prevent its being the ruling passion of their lives, but it is nevertheless true, that in the majority of cases the real love of poetry may be traced to tastes implanted in childhood. Nor is it less true, that only a small number of parents seem to realise this. Either they have no real love of poetry themselves or they do not understand that beautiful words and sounds appeal to children to a remarkable degree.

Ambleside Online studies one poet each term, allowing the student to form a relationship with the poet in the same was as they learn the music of one particular composer. They learn the style of a particular poet - and a little about their subject matter.

The Ambleside ladies have done a wonderful job with their selection of poets, but as Australians there are three in particular that are worthy of a term - at least -of their own. I speak of the Great Australian Three - Banjo Patterson, Henry Lawson and C. J. Dennis.

We substitute the term three anthology in AO1 with the wonderful C. J. Dennis book,
A Book for Kids. 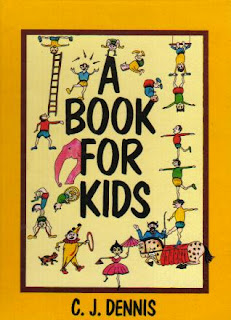 Dennis wrote A Book for Kids, a marvellous collection of verse and stories, illustrated with his own sketches in 1921.

Although Dennis and his wife had no children of their own, he knew one very important thing about them - he knew how to make them laugh! This book, with our favourite verse - The Triantiwontigongolope, has entertained thousands of kids "over four and under four-and-eighty", as Dennis' dedication puts it, since it was first published.

It is out of print, but most of it is online here, and it is widely available in secondhand book shops. ABC Books produced a wonderful audiobook of many of the poems narrated by Colin Friels in 2006.

It lives on weeds and wattle-gum, and has a funny face;
Its appetite is hearty, and its manners a disgrace.
When first you come upon it, it will give you quite a scare,
But when you look for it again, you find it isn't there.
And unless you call it softly it will stay away and mope.
So try:
Tri-
Tri-anti-wonti-
Triantiwontigongolope.

It trembles if you tickle it or tread upon its toes;
It is not an early riser, but it has a snubbish nose.
If you snear at it, or scold it, it will scuttle off in shame,
But it purrs and purrs quite proudly if you call it by its name,
And offer it some sandwiches of sealing-wax and soap.
So try:
Tri-
Tri-anti-wonti-
Triantiwontigongolope .

But of course you haven't seen it; and I truthfully confess
That I haven't seen it either, and I don't know its address.
For there isn't such an insect, though there really might have been
If the trees and grass were purple, and the sky was bottle green.
It's just a little joke of mine, which you'll forgive, I hope.
Oh, try!
Tri-
Tri-anti-wonti-
Triantiwontigongolope.

In AO2 we substitute term 2 - Riley and Field (too sugary for us anyway!) for Banjo Patterson's The Animals Noah Forgot. 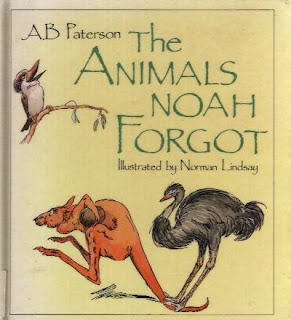 Again it's out of print - again it's readily available second hand - and well worth finding for Norman Lindsay's marvellous illustrations! You can read most of it online here:

This delightful collection of illustrated children's verseIt brings to life wonderful characters like Bristling Billy the Porcupine, Weary Will the Wombat, Old Man Platypus, Baggy-beak the Pelican and many more. It was written for children but, like all classics, it reaches out to people of all ages.

It reveals Paterson's great love of the Australian bush and his wry sense of humour, and includes some of the most charming verses ever written about Australian animals. Shame about the title...

Far from the trouble and toil of town,
Where the reed beds sweep and shiver,
Look at a fragment of velvet brown -
Old Man Platypus drifting down,
Drifting along the river.

And he plays and dives in the river bends
In a style that is most elusive;
With few relations and fewer friends,
For Old Man Platypus descends
From a family most exclusive.

He shares his burrow beneath the bank
With his wife and his son and daughter
At the roots of the reeds and the grasses rank;
And the bubbles show where our hero sank
To its entrance under water.

Safe in their burrow below the falls
They live in a world of wonder,
Where no one visits and no one calls,
They sleep like little brown billiard balls
With their beaks tucked neatly under.

And he talks in a deep unfriendly growl
As he goes on his journey lonely;
For he's no relation to fish nor fowl,
Nor to bird nor beast, nor to horned owl;
In fact, he's the one and only!