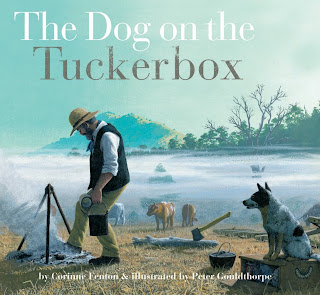 I've done my share of shearing sheep,
Of droving and all that;
And bogged a bullock team as well,
On a Murrumbidgee flat.
I've seen the bullock stretch and strain
And blink his bleary eye,
And the dog sat on the tuckerbox
Nine miles from Gundagai.

I've been jilted, jarred and crossed in love,
And sand-bagged in the dark,
Till if a mountain fell on me,
I'd treat it as a lark.
It's when you've got your bullocks bogged,
That's the time you flog and cry,
And the dog sits on the tuckerbox
Nine miles from Gundagai.

We've all got our little troubles,
In life's hard, thorny way.
Some strike them in a motor car
And others in a dray.
But when your dog and bullocks strike,
It ain't no apple pie,
And the dog sat on the tuckerbox
Nine miles from Gundagai.

But that's all past and dead and gone,
And I've sold the team for meat,
And perhaps, some day where I was bogged,
There'll be an asphalt street,
The dog, ah! well he got a bait,
And thought he'd like to die,
So I buried him in the tuckerbox,
Nine miles from Gundagai.

Do you know the story of the dog on the tuckerbox? Have you ever thought to tell it to your kids? This beautiful children's book by Corinne Fenton, author of Queenie: One Elephant's Story, and illustrated by Peter Gouldthorpe will make your task easy. The Dog on the Tuckerbox is a visual and literary delight. It is one of those rare things - a newly written and absolutely beautiful Australian Living book.

The book tells the story of a loyal dog, Lady, and her master, Bill in the time of the Australian bullockies, using simple language to record the tale and bring the early Australian time period to life. Peter Gouldthorpe’s illustrations are exquisite. This is a treasured new addition to our home library. Put it on your Christmas wish list!!

Like some much of our country's early folklore, the origins of the Dog on the Tuckerbox are clouded in uncertainty and controversy, but that its origins lie in the Australian bush and the early pioneers who left Sydney in search of the source of the Murrumbidgee River during the period 1830-50 is sure.

They were hard and hazardous times and supplies and stores were transported along makeshift tracks over rough terrain by bullock teams. Often on such occasions the bullocky's dog would sit guarding its master's tuckerbox and possessions while he was away seeking help after being bogged at yet another river crossing.

And so the story of Lady and Bill was written.

Bowyang Yorke was the first to mention the dog sitting on a tuckerbox in his ballad of Bullocky Bill penned in 1857:

As Iwas coming down Conroy's Gap,
I heard a maiden cry;
'There goes Bill the Bullocky,
He's bound for Gundagai.
A better poor old beggar
Never earnt an honest crust,
A better poor old beggar
Never drug a whip through dust.'
His team got bogged at the Nine Mile Creek,
Bill lashed and swore and cried;
'If Nobby don't get me out of this,
I'll tattoo his b....y hide.'
But Nobby strained and broke the yoke,
And poked out the leader's eye;
Then the dog sat on the Tucker Box
Nine miles from Gundagai.

It was Jack Moses' poem, published in 1938 though, that really captured our imaginations. Around the same time Jack O'Hagan wrote his famous song of the same name. It's hard to find the original lyrics to this song, but these ones were published in a book called Soldier Songs for Camp and Canteen published in Melbourne in 1941.

I think she's bonzer and she reckons I'm good o.
She's such a trimmer that I've entered her for the local show;
And my Mabel waits for me underneath the bright blue sky,
Where the dog sits on the tucker box five miles from Gundagai.

Gundagai, perhaps more than any other Australian town, is referenced in stories, songs and poems. These include the other well known Jack Hagan song, Along the Road to Gundagai:

There's a track winding back
to an old-fashioned shack,
Along the road to Gundagai.
Where the blue gums are growin'
and the Murrumbidgee's flowin'
beneath that starry sky.

Where my moma and daddy are waitin' for me
And the pals of my childhood once more I will see
Then no more will I roam
when I'm headin' right for home
Along the road to Gundagai.

Then there's Flash Jack from Gundagai by Banjo himself:

Banjo Paterson wrote The Road to Gundagai as well:

The mountain road goes up and down
From Gundagai to Tumut Town.
And, branching off, there runs a track
Across the foothills grim and black,

Across the plains and ranges grey
To Sydney city far away.

It came by chance one day that I
From Tumut rode to Gundagai,

And reached about the evening tide
The crossing where the roads divide;

And, waiting at the crossing place,
I saw a maiden fair of face,

With eyes of deepest violet blue,
And cheeks to match the rose in hue

— The fairest maids Australia knows
Are bred among the mountain snows.

Then, fearing I might go astray,
I asked if she could show the way.

Her voice might well a man bewitch
—Its tones so supple, deep, and rich.

"The tracks are clear," she made reply,
"And this goes down to Sydney Town,
And that one goes to Gundagai."

Then slowly, looking coyly back,
She went along the Sydney track

And I for one was well content
To go the road the lady went;

But round the turn a swain she met
—The kiss she gave him haunts me yet!

Hmm, you could almost do a bit of a unit study...if you weren't afraid Miss Mason's immortal unit study comments wouldn't haunt your sleep all term!