An education using Ambleside Online will introduce your kids to the 'must reads' of American literature. It will go a long way towards covering British literature too. It will do nothing to teach them about Australia.

That, in the main, is what this blog is about - personalising AO for our family. We "Australianise" it, "Reformed Presbyterianise" it, pull at it and tug it and finally we end up with a curriculum tailor made just for us.

I've been working on a list of classic Australian children's literature to include on these pages - the kinds of books that fit Italo Calvino's lofty definition of classic books that I copied here. I need the list to ensure that we cover as many of the important Australian books at the right time in Jemimah's education, just like AO ensures that for the American classics. It's taking a while. There are many good lists of Australian books - just none that include only the classics.

Here are three of my favourite Australian book lists:

While I compile the classic list, here are reviews of the books we did in AO1:

Dot and the Kangaroo 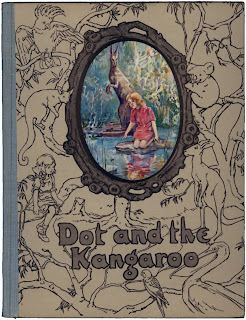 The plot is a simple animal fantasy - A little girl named Dot is lost in the bush after chasing a hare into the wood and losing sight of her home. A red kangaroo finds her, and finds a way to communicate with her by giving her magic berries to eat. The berries allow Dot to understand the language of the bush creatures, and the kangaroo, who has lost her own joey, decides to help little Dot find 'her way'despite her own fear of humans.

The book is a natural history lesson in Australian bush animals in much the same way as Thornton Burgess wrote about American birds and animals. Because of the magic berries, the animals can speak without becoming anthropomorphised and without losing their unique habits and characteristics.

Birds and animals are given their correct names: Night Jars, Curlews and Willie Wagtails, and the book teaches about the habits that make each unique. The Bower birds decorate their bowers, the brolgas dance and the possums quarrel.

Sarah Prince on her website, Australian Childrens Literature writes this:

The more I study this book, the more I realise what a masterpiece it really is, it has all the action and drama of any modern novel, with a hint of fantasy. The chase through the bush is filled with suspense and excitement, with great sadness at the near death of Kangaroo and the loss of her joey. Clever puns and plays with words abound and the themes and comments on conservation and humankind's attitude to nature are very up to date. Children are given clear messages of the importance of uniting and harmonising with nature and also forgiving those who have wronged us. Written with surprising foresight, the themes are very relevant to the new milliennium - Care for the environment and conservation of our bush and it's creatures, not to kill unnecessarily and that we can live in harmony with nature.

Although the first publication of Dot and the Kangaroo was produced in England, Frank P. Mahoney's outstanding etchings were created in Australia and can be seen online.

In 1977, Yoram Gross adapted the story to an animated film. It was the second animated feature film made in Australia, but the first to make money. The film has had an extraordinarily long life, partly because Yoram and Sandra Gross set up a company to distribute their own films to Australian schools.

Dot and the Kangaroo is regarded as a classic Australian film mainly because it gave encouragement to the small animation industry in Australia and proved that there was a market for home-grown children’s films. Unfortunately, I think it's twaddle...you can buy it here.

Dot the book is available online. If you decide to buy a print version make sure you get one with Mahoney's beautiful atchings. The accuracy of his illustrations adds much to the value of the book. This version from Amazon had small renderings of the original prints. Buying an older version from Abebooks is probably the best bet!

The Way of the Whirlwind

Granddaughters of the famous pioneer and explorer Patsy Durack, (whose life story was written in To Ride a Fine Horse) sisters, Mary and Elizabeth Durack spent their early years living on cattle stations in North Western Australia. The Durack sisters had an unusual affinity with the Aborigines during a time when they were despised by the majority of Australians.
The Way of the Whirlwind is dedicated to the aboriginal children:

To you brown children of those northern years
That saw the flowering of your childhood through,
Revealing us your laughter and your fears
And ways bush-wise and secrets that you knew.

For we have watched the hours of your delight
And sighed that so much sweetness fade away,
Of days that knew no darkness but the night
And ways that knew no parting save in play...

Mary was the writer and Elizabeth the artist and together they produced some of Australia's most memorable works of the 40's, 50's and 60's.

The Way of the Whirlwind is the adventure of Nungaree and Jungaree, two aboriginal children, in search of their baby brother Woogoo, who has been stolen by Here-and-there, the whirlwind. The children find themselves in many strange places and in some odd situations before the reach the whirlwind's home in Nowhere.

The beautifully written and illustrated book realistically describes aboriginal customs, daily activities and dreamtime myths and legend in a lively story that gripped Jemimah's imagination in a way that no other of her school books has done.

Elizabeth Durack is an exceptional artist despite the controversy that marred her later life with the infamous 'Eddie Burrup' affair of 1997. The pictures in this book are beautiful and are well worth a term of picture study in their own right or as part of a study of aboriginal art for older children.

The Way of the Whirlwind is out of print. Abebooks generally has overpriced copies available, but the book is well worth an asking price of $45 - $55 with the beautiful colour prints.