Nowhere in the world have I encountered a festival of people that has such a magnificent appeal to the whole nation. The Cup astonishes me.

Even those of us who don't gamble have to agree with Mark Train that the Melbourne Cup is a pretty big deal. To start with, its a public holiday (and has been since 1877!)

Like it or not, at 3.00 pm AEST today, Australians everywhere will stop to listen to the race call, or watch the race on TV. Most will try their luck with a small bet at the TAB or entry into a 'sweep' - a lottery in which each ticket-holder is matched with a randomly drawn horse.

Thousands will brave Melbourne's weather to ruin their heels track side suffering terrible hayfever while they're at it...(yeah, I'll admit it, I did it too in my youth).

We won't be among them, but I must admit that like most Australians I have a soft spot for one part of the Cup's history - Phar Lap. 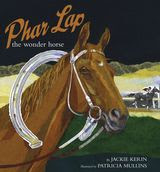 This new book, Phar Lap the Wonder Horse, is the result of a collaboration between author, Jackie Kerin, artist and illustrator Patricia Mullins, and Museum Victoria. The book, written for kids, tells his story in the form of a ballad, evoking "the magic and charm of traditional storytelling" (so the blurb says...).

It is illustrated by award-winning artist, Patricia Mullins, and you can see her original illustrations at a temporary exhibition at Melbourne Museum until 21st November. While you're there you can buy Phar Lap the Wonder Horse from the Melbourne Museum Shop, otherwise it will be available in book shops from next week.

Phar Lap: A True Legend, a book for adults and older kids is written by one of the museum curators, Michael Reason, and tells the fascinating story of the great horse in more detail. It would also be worth a look.

Take a look at the Phar Lap website to learn more about him - and to watch his story!