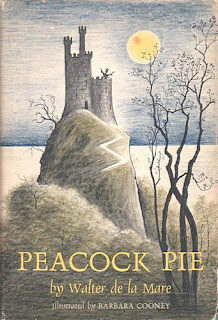 I heard a horseman
Ride over the hill;
The moon shone clear,
The night was still;
His helm was silver,
And pale was he;
And the horse he rode
Was of ivory.

Jemimah always needs a satisfactory solution. We read the selection over again. We discuss, we hypothesise, we speculate. Finally she makes her decision. The horseman's a knight. Definitely. The visitor to the orchard's a fairy. The question has an answer.

The discussion is often animated - but always enjoyable.

Walter de la Mare's poetry allows us to use our imagination and to dream...Maybe he means this...or maybe that means that. His poetry is beautiful - the stuff that creates fond childhood memories. No child should miss out on this poet, he is truly one of the greats.

Despite our experiences of Walter de la Mare's poetry, not all Amblesiders share our views. The Yahoo groups are full of mums complaining that their children don't like this poet...and neither do they.

Certainly there are some of de la Mare's poems that are beyond the comprehension of many children - even some of his children's poems. There are other children who are concrete thinkers. They take things too literally to ever be fond of the enigmatic ambiguity of many of these poems. They fail to find a satisfactory answer from the poet himself, and lack the imagination to be able to create one for themselves. Probably de la Mare isn't the poet that is going to become that child's favourite. On the other hand, the child may grow to appreciate the beauty, the cleverness of some of his poems.

Take nature, for instance: Trees; Wanderers; The Little Bird; Bluebells; The Hare; The Rainbow; The Mother Bird; A Goldfinch; The Warbler. A clear appreciation of nature shines through this poet's work. Now nature is something that Charlotte Mason kids can relate to - and these poems are simple, stark and beautiful. Take this one:

I saw the lovely arch
Of Rainbow span the sky,
The gold sun burning
As the rain swept by.

In bright-ringed solitude
The showery foliage shone
One lovely moment,
And the Bow was gone.

If your child is a literal thinker you would do well to select your poems carefully, but don't give up all together without a fair trial.

De la Mare has that rare ability to really see. Look at his narration of Breughel's picture. Did you see what he did when you studied Hunters in the Snow? We didn't - and we didn't need to write it out in verse, even.

De la Mare knows kids too. He knows that they like nonsense - take The Bees' Song, for example, and he knows that they like puzzles - how can 3 cats have the five eyes that make up the poem's name? He likes the things that children like, as well as those that children like to fear: scarecrows and shepherds, ghosts and fairies, knights and huntsmen,sailors and mariners. He uses phrases like "Alas, alack", "do diddle di do" and "riddle-cum-ree".

Perhaps Walter de la Mare will appeal most to the child with imagination - the dreamer - but there is something in his work for everyone - young and old alike.

For a period between the wars, De la Mare was one of Britain's favourite poets and storytellers - he is just the kind of writer of whom one can use such a phrase - but few read him now. His books are not currently available through Amazon, except in used editions.

It is time they enjoyed renewed popularity.