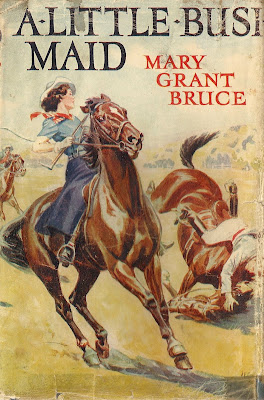 As for Norah's education, that was of the kind best defined as a minus quantity.

"I won't have her bothered with books too early," Mr. Linton had said when nurse hinted, on Norah's eight birthday, that it was time she began the rudiments of learning. "Time enough yet–we don't want to make a bookworm of her!"

Whereat nurse smiled demurely, knowing that that was the last thing to be afraid of in connexion with her child. But she worried in her responsible old soul all the same; and when a wet day or the occasional absence of Mr. Linton left Norah without occupation, she induced her to begin a few elementary lessons. The child was quick enough, and soon learned to read fairly well and to write laboriously; but there nurse's teaching from books ended.

Of other and practical teaching, however, she had a greater store. Mr. Linton had a strong leaning towards the old-fashioned virtues, and it was at a word from him that Norah had gone to the kitchen and asked Mrs. Brown to teach her to cook. Mrs. Brown–fat, good-natured and adoring–was all acquiescence, and by the time Norah was eleven she knew more of cooking and general housekeeping than many girls grown up and fancying themselves ready to undertake houses of their own. Moreover, she could sew rather well, though she frankly detested the accomplishment. The one form of work she cared for was knitting, and it was her boast that her father wore only the socks she manufactured for him.

I wish I could read more of Mary Grant Bruce's opinions on education. At Australian Children's Literature.com , citing Bruce's biography, Billabong's Author; The life of Mary Grant Bruce, written by Alison Alexander in 1979, we gain some insight, reading that Bruce felt:

Sarah Prince says,"Bruce had a great love of children and they, in turn, loved her. Both before and after the release of the first Billabong books, she devoted a great deal of time to the creation of various children's pages and stories, replying in person, to each child whose letter she received. Unlike many older people, Mary never criticised contemporary youth, but had an open mind on the subject, stressing the good in them. She was a firm believer in "the potentialities of the youth of the present generation"."

Although I suspect that Charlotte Mason as a school teacher may have been a little less dismissive of organised education than her Antipodean contemporary, I think that the two women would have found many points of agreement in their pedagogological approaches. I wonder whether either knew of the other? Miss Mason, I feel would have been fully in accord with the idea of Norah's education beginning at 8 or later and of 'other and practical teaching' both indoors and outdoors. She would also have agreed with Bruce's idea of individualising education to the child, and the idea of spending much of every day outside. She would have agreed that there was plenty of time later for book learning too.

Norah the bush maid's free and easy Charlotte Masonesque life on an Australian sheep station in Northern Victoria certainly remains compulsory reading for today's Australian child a century after its publication in 1910. It's sexist, sure; classist; definitely; and racist, without a doubt, but today's young lady could do worse than to emulate strong, feisty Norah who demonstrates consistently good morals and virtues; other races including the Chinese as well as Australia's Aborigines make regular appearances as well meaning and well loved characters, even if their treatment would not be acceptable today, and while Norah and her family belong to a distinctly English upper middle class, at least the treatment of their staff was kind to the extent that they were almost treated as friends.

Norah and her friends live an idealised, stereotypical way of rural Australian life that is all but gone today. Together the children have horse races, crack stockwhips, fight bush fires, fish in the billabongs, encounter swagmen, hermits and tramps, eat marvellous English tucker, keep chickens and wallabies and dogs and horses and guinea pigs and kangaroos and even a turloise (so called because Norah could never remember if he were a turtle or a tortoise) as well as honeyeaters, Queensland finches, blackbirds, doves and pigeons. And canaries. And a parrot called Fudge and a cocky called Caesar. Phew. 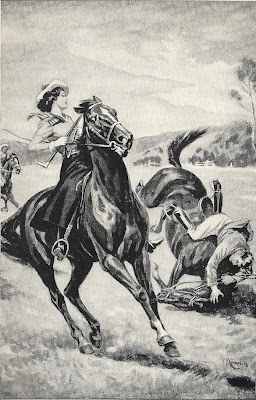 I rather believe that it is an obligation of Aussie parents to ensure that your little Australians do not pass into adulthood without dreaming of a life full of horse riding, stock whips, fishing, games and family togetherness. A life without at least the first few of the Billabong books is unimaginable!! For one thing, your family's vocabulary would be forever without such delightful expressions as You tellee fine large crammee. So dly up! and You duffer! and That's ripping! and what about Well, you are a brick!

Jemimah and I are reading A Little Bush Maid in AO3. It is available online from Gutenberg and plenty of other sources, or you can buy a print version from Amazon or Readings. If she continues to enjoys the story of Norah and friends and reads one book a year, there are enough Billabong books to last her until she's 22. It took Mary Grant Bruce 32 years to write the 14 books that make up the series.

Alas not even Norah can avoid education forever...

Norah, do you know, I have something to tell you?"

"What?" Norah's dullness was gone. There was something unusual in her father's tone.

"I'm afraid you won't think it the best news," he said, smiling at her eager face. "But it had to come some day, I suppose. I couldn't keep you a baby always. There's a tutor coming to make a learned lady of my little bush maid."

"Daddy!" There were worlds of horror in the tone.

"Oh, don't!" said her father. "You make me feel a criminal of the deepest dye. What can I do with you, you ignorant small child? I can't let you grow up altogether a bush duffer, dear." His voice was almost apologetic. "I can assure you it might have been worse. Your Aunt Eva has been harrowing my very soul to make me send you to a boarding school. Think of that now!"

"No–not at present, certainly," said her father. "But I had to agree to something–and, really, I knew it was time. You're twelve, you know, Norah. Be reasonable."

"Oh, all right," said Norah, swallowing her disgust. "If you say it's got to be, it has to be, that's all, Daddy. My goodness, how I will hate it! Have I got to learn heaps of things?"

"I'll turn him over to Billy after school," said Norah laughing. "Is he nice, Dad?"