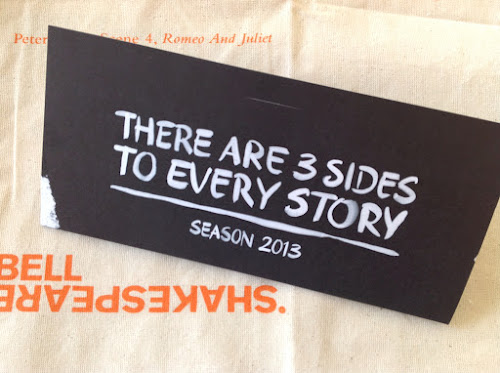 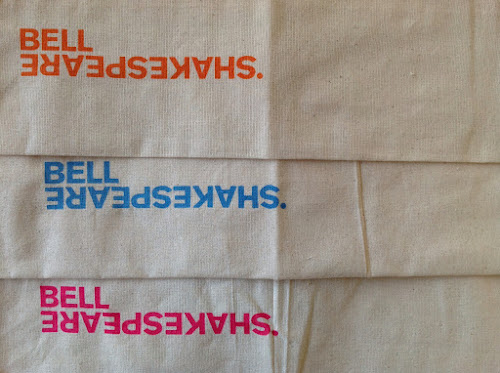 Our seasons tickets to the 2013 season of Bell Shakespeare arrived the other day along with these cute calico carry bags printed with relevant quotes. Wanna see? 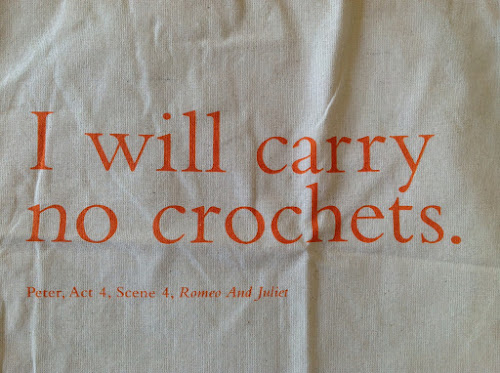 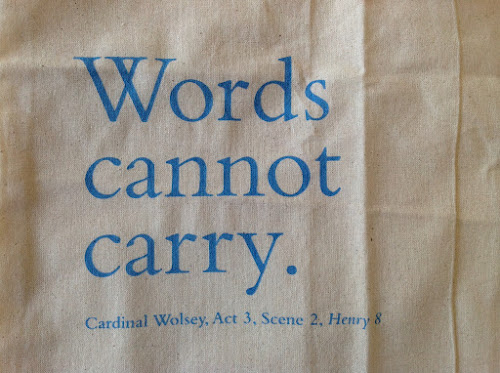 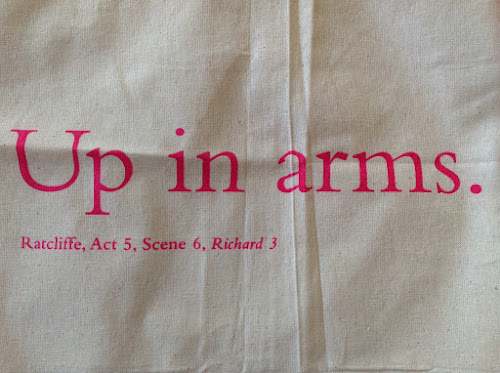 The top one amuses me most, "Carry no crochets", because that's what I'm most likely to carry in a bag of this type, my knitting or crochet. Somehow, I'm guessing this is not the type of crochet Peter was talking of in Romeo and Juliet. The word is more often spelled 'crotchet' referring to the musical note, but I like the idea of it meaning the yarn craft much more!

I write this post to encourage you to consider a live production of Shakespeare for your family. I realise that there is merit to studying the Bard's written works as literature, but seeing his plays performed is what Shakespeare is all about, and once you've seen a few you'll understand why he is the greatest playwright ever.

Aiming to see one of his comedies first is probably most desirable, but even Shakespeare's tragedies and historic pieces have their comic elements, and we have not been disappointed by any of the plays we've seen so far. A production that has not been too modernised is desirable, but often hard to find. Do ensure that any modernisation does not concentrate on the bawdier elements of the play, though, if you can. Many of Shakespeare's plays contain adult humour, but whereas in the original plays these elements are often subtle enough to pass over the head of my naive 10 yo, modern interpretations will often emphasise the sexual innuendos so that anyone will understand. To their detriment and to this mother's red faced mortification.

So, what is available out there? The answer is to have a look around. Here are some of the offerings available in our Capital city of Melbourne. Most cities will have their equivalents.

As I mentioned, my family subscribe to Bell Shakespeare. This company uses contemporary sets and costumes instead of traditional Renaissance styling. Bell has a reputation for his actors accentuating and emphasising the bawdy moments in the original texts as I warn against above, but so far we have not seen this as an issue. An emphasis on cuckolding in Much Ado About Nothing was appropriate, and allowed us to have a lesson in Shakespearean hand gestures, a fascinating subject in its own right. The company tours nationally, performing three plays in each capital city. This year's productions are Henry 4 and A Comedy of Errors (yay!), as well as Racine's Phèdre. Tickets per season are $150 for adults and $90 for kids. Single play tickets are also available.

The Australian Shakespeare Company also presents contemporary productions of Shakespeare and other dramatised classics throughout Australia, including remote and outback locations. They are best known for their production under the stars in parks and gardens, including Melbourne's Botanic Garden. This year's production is Romeo and Juliet. Tickets are $25-$40. I haven't ever seen one of these productions, but I would love to.

Another outdoor company is Ozact, this time presenting Shakespeare in traditional costumes. The company is down-to-earth and friendly, and we really enjoyed their performance of Romeo and Juliet in Geelong's Botanic Gardens last year. This year they'll be back in Geelong on the Australia Day long weekend, where they'll be performing Twelfth Night. We'll be there on the Saturday if you want to join us for a picnic. Tickets are $33 for adults, $20 for kids. They are also performing in other areas of the State over the summer period.

The Royal Shakespeare Company, probably the best known Shakespeare company in the world will be performing The Rape of Lucrece, Shakespeare’s politically-charged, sexually provocative and violent thriller, in the beginning of February. Not one for my ten year old, this one, but I would love to see a more appropriate RSC production one day. Tickets are steep - $85 for adults, $33 for youths.

Apart from these professional offerings, there are also likely to be amateur productions as well. Take a look around and see what you can find. If I've missed any Melbourne shows, do let me know, and I'll add them in.

As you can see, a live performance of Shakespeare does not come cheaply for a family, especially when you have a few children. This is where we have an advantage, with only one child to consider (and pay for!). Some performances are cheaper than others. Some do not charge for young kids. Perhaps it might be a case of sending one child with one parent, and another child with the other parent another time. I realise that for some families the budget is already stretched. In this case, maybe an amateur performance might work. You could even act out a play with your homeschool co-op.

Sometimes you might need to accept that while it would be lovely, the movie version is all you can afford. That's okay. There are some excellent productions. Keep an eye out for the Shakespeare's Globe Onscreen films. They look almost as good as the real thing. Have a look at this trailer.

Whatever you decide to do, a Shakespeare production is an occasion. Don't forget to prepare for your evening. In the preceding week we read the story in Lamb's Shakespeare, as well as reading the most famous scenes aloud together. On the night itself we dress in special going out clothes and chose somewhere nice for dinner before the show. We build the occasion up to be a special occasion, and a special occasion it becomes.

Shakespeare for Jemimah is a good word. It's a word full of excitement and intrigue and hilarity. Shakespeare is fun. I, for one, hope to keep those feelings alive in my daughter. This aim colours the way I approach the subject for school. I don't want to make what is a delight a mere drudgery, but, on the other hand, I do want to learn what we can from this exceptional playwright. For now, I think we're doing pretty well.

See you in Geelong on the 26th January. We'll be the ones drinking Moët and eating ice-cream cheese. There will be plenty for all.
Posted by Jeanne at 13.1.13